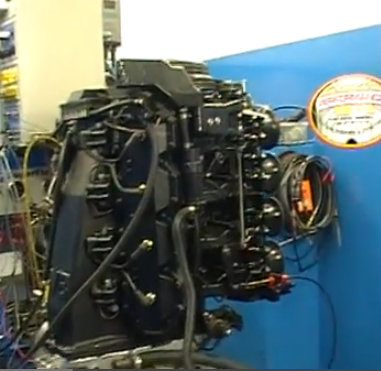 Ok, we have gotten run over with emails, tips, sky writing messages, and bricks thrown through the front window of BS Eastern World HQ regarding two stroke gas engine videos. Firstly, we agree that they are cool. Secondly, there isn’t a lot new about two stroke V8 gas engines. They have been used in outboard boat engine applications for a bunch of years. While we dug all the videos that were sent in to us from Reader-ville we went ahead and found one of the engines hard at work on a dyno in Sweden of all places. This engine is an Evinrude XP300 that began life as a 300hp pice for use hanging off the back of a boat. Because these engines are popular in boat racing applications, there are shops all over the world that will hot rod them for your racing needs. VM Performance in Sweden happens to be one of those places.

This engine has been cranked up to the tune of 373hp and over 340 lb/ft of torque. The revs sound insane because it is a two stroke but peak power actually happens at 6200 rpms and peak torque is happening at 5,200. Admittedly it sounds way cooler than that because of the fact that we’re talking about a two stroke engine. It is certainly weirdo looking (like all naked outboards) with the cylinder banks stacked vertically and its narrow “V” but the proof is in the pudding and this thing makes a lot of pudding!

Believe it or not, there are now bones stock “big block” outboards from the likes of Yamaha that match this racing engine in power. Yamaha’s 5.3L F350 engine is a 350hp 4-stroke piece that will shove a boat of nearly 30ft in length through the water at nearly 30 knots. If we had to make a guess, the Evinrude in the video was probably headed for either an outboard drag racing class or and outboard performance craft circuit style racer. Either way, whatever boat this is powering will haul some serious ass.