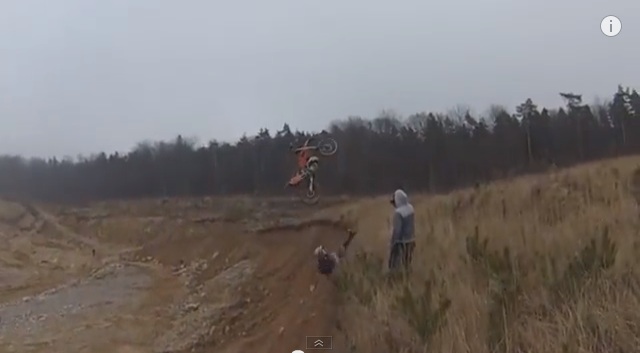 Okay, so it’s seven and a half minutes, but who is counting, really? Trail riding a dirt bike can be an absolute blast, especially when it breaks up the monotony of being stuck on a track, but at least the track’s dangers are well-known. The open world can provide the kind of risks (or as the other riders call it, “entertainment”) that will only present itself when you attempt to ride it. Enduro KeX has got some great footage on his YouTube channel, and you can expect to see more of it here, but let’s start with our strong foot forward: crashes. We aren’t entirely sure where exactly these videos are filmed but the playgrounds they find are great, especially the hill climbs that they have at their disposal. There’s plenty of footage of them getting it right, but when it comes to getting it wrong…well, let’s face facts, dear readers: you’re hard-pressed to find a better way to fail spectacularly than a dirt bike and some open terrain. And some of those hills look pretty steep from where we’re sitting. From simple lay-downs to getting smacked in the face with the front wheel as man and machine roll down the hill, this one’s gonna hurt to watch. Just be grateful it ain’t you.

2 thoughts on “Seven Minutes Of Hell: These Enduro Riders Recorded Their Best Fails”