Take A C10 Truck To Mexico, Fix It Up, And Drive It Back Home. Sounds Easy Right? Well, Not Quite That Easy… 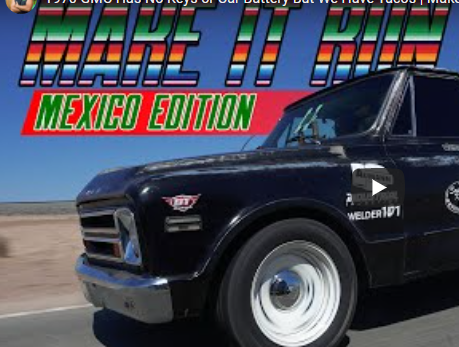 I love this story, because I have always wanted to drive a car down to Mexico to get a paint job or interior done in it over a couple of days while hanging out in Mexico. But I love Mexico, so maybe that isn’t the thing for everyone. But apparently it is to the guys at Welderup because they did exactly that with a C10 Chevrolet that they cruised down to Mexico and made into something special before driving it back home to Las Vegas. And it’s not like it was some nice driving rig that they had lots of confidence in, so the adventure is real.

To be fair, it’s an LS Swapped C10, but like many LS swaps we’ve seen there are tons of wires and stuff that don’t exactly exude confidence. It looks like and LS Swap done by someone who heard that anyone could do it and so they did. When the guys got to the truck it wasn’t even able to be started up because it had no battery and no key. Luckily the C10 has the key in the dash, so they could remove the ignition switch wiring from the back and jump it the old-fashioned way.

Oh and besides doing all the cool stuff to make this truck something you’d want to pay attention to, they also ate a jillion tacos on the adventure. And that my friends is something I can get into. They deserved them after doing some paint work, interior, engine tuning, and more, all in Mexico.

Watch This Dirt Track Racer Roll Over Twice And Then Get Pissed When A Flattened Tire Forces Him Out Of The Race Historical Video: This Documentary Shows The Debut Of The Porsche 917 In Can-Am At Mosport In 1972

4 thoughts on “Take A C10 Truck To Mexico, Fix It Up, And Drive It Back Home. Sounds Easy Right? Well, Not Quite That Easy…”