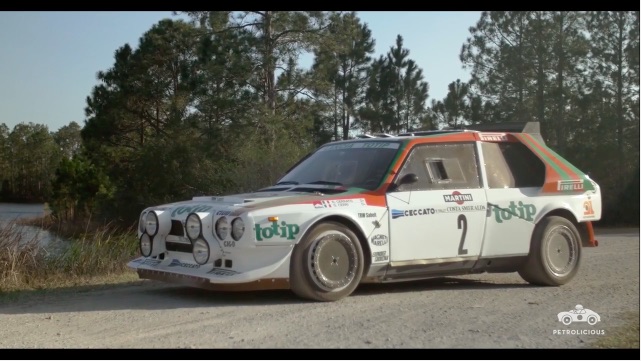 Five hundred horsepower, courtesy of a sixteen valve, four-cylinder engine that sports both a supercharger and a turbocharger, sitting in thimble of the car. A full steel tubular space frame, draped with only the minimal amount of bodywork needed for homologation purposes. A 0-60 time that threatens modern supercars of the current era, let alone what was available in the mid-1980s. The Lancia Delta S4 was the third major rally stomper from the company, following up such acts as the wild Dino-powered, wedge-shaped Stratos and the Montecarlo-themed Rally 037, and it’s quite literally the best and the worst of the Group B era of rally cars in one vehicle. The good? Expletive-inducing amounts of  power from a small boosted engine hooked to four driving wheels, nimble handling that could tolerate just about every form of abuse that could be flung at it, and noises that would cause the devil to take a second look. The bad? The car that Henri Toivonen and Sergio Cresto perished in at the 1986 Tour de Corse was a Delta S4. Nobody knows why Toivonen missed the left-hand corner, but everybody knows what happened next: the Lancia plunged off of the ravine and exploded, killing the driver and co-driver instantly, which led to the instant decision of the FISA to ban the Group B cars for the 1987 season. Even today, in private hands, the Delta S4 is a dangerous weapon…wield it carefully and with full respect and it will be an unbelievable ally. Anything less, and you’ll cut your own head off.

Buy This NOW! A Blown Classic Slingshot Dragster That's Awesome From One End To The Other The NHRA Has Made A Ruling On Funny Car Headers: Here's Why You Look Dumb If You Freak Out