The Aussies Have A Two Seat Top Fuel Dragster – This Is Not A Flipping Drill! (Video) 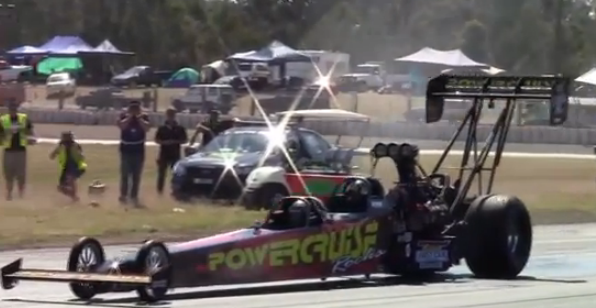 We’ve long reveled at the awesome Powercruise shows that go down in Australia and at a couple locations here in the USA. Sadly we haven’t been able to attend one ourselves, but we sure have run lots of video and stuff from shows that have happened in the past. The Powercruise events are all about driving your stuff hard and having a great time in a controlled and police free environment. From burnout contests to drag racing and other stuff, the emphasis is about full throttle action, tire smoke, and bouncing the motor off the limiter early and often. Well, little did we know that the Gup and the other crazy bastards have cranked up the fun knob so hard that they broke it right off. You can now go for a ride in a freaking TWO SEAT TOP FUEL DRAGSTER at Powercruise events. This isn’t some weak Sally piece with a tired small block on a little load, this is a legit, purpose built two seat fueler with a modern nitro burning hemi in it with a big percentage of nitro. The video below will show the car in action with a passenger loaded into the front and the car completing a massive burnout at whatever course the Powercruise event that this was filmed at was taking place.

Look people, our boys in Oz are making us look really bad now. Their burnout contests are far superior to ours as their have wild sideways action and stuff catching fire. Their door slammers were the first to the five second zone in competition and now they have unveiled the ICBM of ride along experiences. What do we counter with? A two seater super comp car? The Richard Petty Driving Experience? Rush hour in Los Angeles? We’re sucking hind teat here, clearly. We have no idea what the counter strike is for this but we need to come up with something…and fast. The bad news is that there is a 0.0% chance of this thing ever being run in the USA (at least on a sanctioned drag strip) because of all the legal mumbo jumbo. Maybe Gup can sneak this baby into the states and run it like they do in this video on a road course or other type of facility. That may be a loophole large enough to drive a two seat fuel dragster through. We have no idea what this thing costs to ride in, but we have to guess it is more than a few bucks. That being said, other than going to Paul Smith’s school or a select few other places, you are getting an experience that very few on Earth ever will. Think the driver is in the front of the back?

The dragster was built by Darren Morgan Racing in Australia. We salute that dude, because this thing is cool as hell.

PRESS PLAY BELOW TO SEE THE POWERCRUISE TWO SEAT DRAGSTER PERFORM A SHUTTLE LAUNCH BURNOUT WITH A PASSENGER ON BOARD!

7 thoughts on “The Aussies Have A Two Seat Top Fuel Dragster – This Is Not A Flipping Drill! (Video)”