The Beer Money Mustang Tests A Magnetic Driver’s Education Sign. It’s Great To About 129, And Then It Gets No Bueno 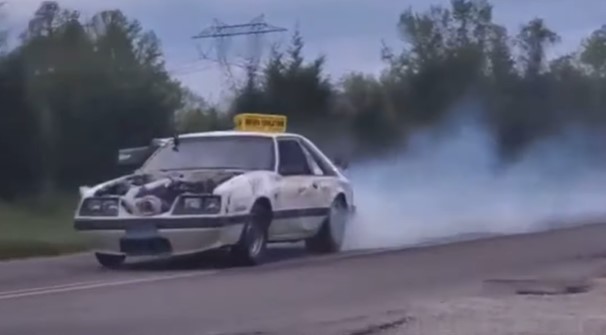 Most every conversation we have about the Beer Money Mustang is at some point or another filled with laughter about something dumb that Lyle has done to, or with, the car. It never ceases to entertain us, and we can’t stop laughing about the fun that this car always seems to bring with it. So when Lyle said he wanted to test a legit Driver’s Education roof top sign, I laughed and said let me see the video! You’ll dig this one, because this sign actually almost made it to 130 mph before the streets of Mexico testing proved that 130 is in fact the max speed this sign should be rated for. It does look killer on the roof while doing burnouts though don’t you think?

And speaking of the roof, you have to pay attention to the shots of the roof of the car. It has been beat to hell during its poor little life. Starting with Matt climbing on it during the $10k Drag Shootout build with the car, and ending with the latest hood over the top of the roof scenario thanks to Lyle. And don’t forget that the hatch has also visited the roof before. This poor car has felt some pain, but it just keeps on ticking for us, and we love it.

So watch this video and prepare to laugh and love what Lyle and Beer Money did.

2 thoughts on “The Beer Money Mustang Tests A Magnetic Driver’s Education Sign. It’s Great To About 129, And Then It Gets No Bueno”