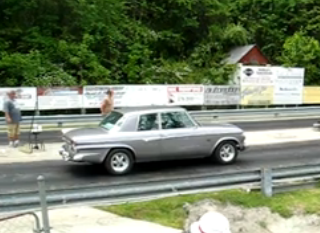 This week’s Parting Shift takes us to a killer little drag strip in Indiana called Brown County Dragway. It has operated since the 1950s, and by the looks of the video it has changed little since then. We’ve put this place on our “must visit” list. On the track is the very neat 1963 Studebaker Lark R1 of Richard Poe. This car is recognized as one of the quickest stock R1 Studebakers in the country and lots of that comes from Poe’s awesome skills with a four gear. Seriously, when you listen to how he rows what we think is the Borg Warner T-10 that the car would have had stock, you’ll be impressed. He’s old school super stock guy good!

The R1 model was packing a 289ci Stude V8 that was factory rated at 240 hp. Poe’s car runs in the high-13-second zone in the quarter mile, but in this video he’s grabbin’ gears on the 1/8th mile at Brown County Dragway during a Studebaker meet. We’d give an appendage to spend some time behind the wheel of an R1/2/3 Lark just for the experience. These cars were gnarly little killers right out of the box back in the day. Their unassuming looks and the rather staid reputation that Studebaker had among the young guys of the muscle car era would have made these some of the most fun street sweepers ever built. As is evidenced here, they can certainly be made to hustle!

Listen to that 289 sing it’s song as Poe works the swizzle-stick, it is great stuff!

Carnage Photos: One Dead Hemi Courtesy of Nitro, A Connecting Rod Failure, And Mark Rebilas Crazed Video: A Motorcycle Racer Drags His Knee and Then His Head Without Crashing!