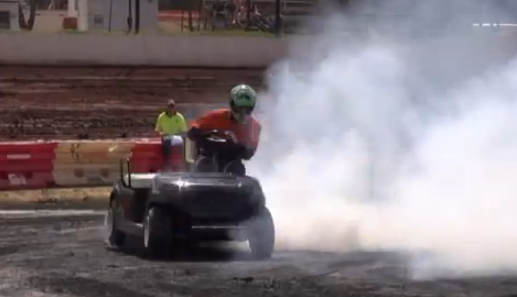 Spending the year as the announcer for the ECTA has shown me many things about land speed racing but one of the most basic things I have learned is that Hyabusa motorcycles absolutely haul ass in whatever form they are in. Be it stock, on nitrous, or pumped full of turbo boost those things are two wheeled rockets with engines capable of making completely wild levels of power for their size. There are streamliners with Hyabusa engines and even full sized cars with those mills swapped in for LSR duty, but this is the first time I have seen an Aussie burnout vehicle built with one. Oh, and that vehicle is a damned golf cart.

As you will see in the video, it exhibits a slight amount of push when under hard throttle, but a little blip here and there sends it spinning and absolutely destroying the little tires on the back of it. We love the fact that the guy is wearing a helmet, because if the whole mess landed on top of him, that bucket would at least allow for an open casket funeral. That being said, having the words, “Died doing burnouts in a Hyabusa powered golf cart” on your tombstone wouldn’t be all that bad. That grave would be like the Jim Morrison headstone in France. It would become a BS travel destination!

After some awesome burnout fun, which nearly ends before it starts (you’ll see what we mean) the ‘Busa cart quits running and the video stops. We’re guessing it was nothing major and the boys got it sorted out soon enough to finish killing the tires. Either that or they took it for high speed runs on public roads and flirted with death. Either of those options are acceptable. There are states in the USA where you could probably get this thing registered (I’m looking at YOU Michigan) but driving this machine on a public road in Australia would probably result in a death sentence. Either way, this creation is 100% BangShift approved!

BackFire! An Impassioned Reader Response To Our Editorial Columns By BangShifter Bryan McTaggart - Do You Agree With Him? Ride On The Roof As Sean Ashe's X275 Mustang Spins Out Of Control And Whacks The Wall!