Three Airbags, One Wheel, One Civic, And A Lot Of Unused Brain Cells Resulted In This Video 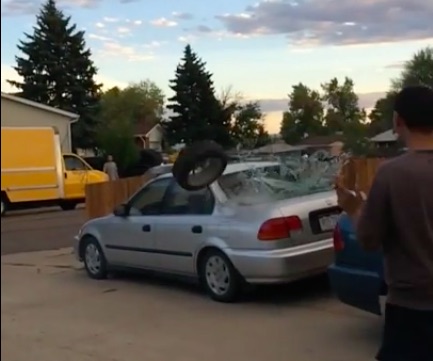 Honestly, we get stupid entertainment. For the long-termers here who remember the CarJunkieTV days, all you have to say is “BrakeKleen” to conjure up images of Freiberger catching Chad on fire, or the LeMons Fury randomly catching fire…and let’s not forget the footage of Chad getting an air chuck straight to the junk courtesy of a very amused DF. Hell, I have my own footage where I turned the Raven Imperial’s original TBI plate system into a highly improvised wok, causing one friend to run into my house in unadulterated fear while another friend suddenly developed an appetite. While anyone can critique the whys and why nots of having a little bit of fun, the line between “stupid fun” and “effing stupid” is drawn when people other than the ones directly involved can get seriously hurt in the process of what you are attempting to do. Putting yourself in the hospital while imitating Jackass is just a lesson. Putting someone else in the hospital is something that will weigh on your conscience for years to come.

Here we have a few guys who are killing an afternoon in Colorado. Boredom has set in, so we bring out the fun part: three airbags and a loose wheel/tire combo. Take note: this is all happening in a front yard, not in a better location like a field or a junkyard. For a refresher course, an airbag inflates at 200 MPH. A single airbag can punt a five-gallon paint bucket high into the air, or a 300 pound frat boy clean off of a couch. Three airbags is more than enough to launch that rolling stock into the air…high enough into the air, in fact, for our heroes to start running right into the middle of the wheel’s landing zone to see where it is. Don’t worry, the falling wheel/tire combo misses these guys and crashes down onto the roof of a Honda Civic that was minding it’s own business.

We cannot stress this enough: do not attempt this at home. At least find an empty field.

Edgewater Hot Rod Drags Coverage: Photos From The Huge Car Show At The Event Somernites Cruise Coverage: Cars On The Streets, And Looking Good At The Show

2 thoughts on “Three Airbags, One Wheel, One Civic, And A Lot Of Unused Brain Cells Resulted In This Video”