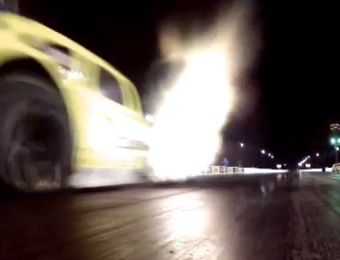 There are certain drag racing truths that I tend to hold as self evident. One of them was that Ron Fassl was going to own the record for the quickest AA/FA pass of all time until the end of time. Can you blame me? It has been nine long years since Fassl laid down a titanic 5.293/278 mph run at Tulsa Raceway Park. Some guys have flirted with it, but no one had bested it in almost a decade. It just seemed like it was never going to happen…and then along came last weekend. Running at the famed Rt 66 Raceway in Joliet, Illinois, Tom Motry’s Drastic Plastic AA/FA with shoe Joe Haas behind the wheel laid down one of the great passes in the history of drag racing with a 5.286/276.06 moon shot down the Chicagoland’s quickest patch of asphalt and concrete. On its face the run is incredible but when you learn a little about the car and Tom Motry, it gets exponentially better.

What could be cooler than resetting the all time AA/FA record? How about doing it with a single magneto engine, no data recorder, no clutch management, no computer, no boost gauge, no exhaust gas temp sensors, and a race weight of over 2600lbs! That’s right kids, this monster lap was done the old fashioned way. It was done in a car setup by a guy who uses his own experience and expertise with the baddest ass racing fuel on planet Earth and no assistance from anything else. This stuff wasn’t broken or missing, it has never been on the car in the first place. It makes the hair on our neck stand up thinking of how bad ass and awesome this whole thing is.  Let’s not forget Haas in this equation because after all, it is he who managed to wrassle the inherently pissed off car down the race track without so much as a playback tach…ok, they may have a playback tach, I don’t have confirmation on that.

When you see the time slip, your eyes will bug out of your head. This was a bad ass run from top to bottom. The 60′ time is a mind boggling .892, which is breathtakingly quick for ANYTHING, let alone an AA/FA which is normally sideways by the time it goes 60 feet! Dig the eighth mile elapsed time of 3.511 and the MPH of 219.65. When you think about how hard this car is pulling the back half of the track your eyes may roll into your head. Making 60+ mph on the top end of the track is big stuff! Tom Motry had the phasers set on KILL for this one!

Below we have video of the runs as taken by the guys on the team and there’s a copy of the record setting time slip. It is exceptionally cool to see such a long standing record broken (Fassl still owns the fastest AA/FA pass with the back half of his previous record) and a performance advancement in the most untamed and nasty drag racing class ever conceived. The Drastic Plastic crew should be very proud of their accomplishment and I certainly going to enjoy an adult beverage on their behalf tonight. Hell, I may try to chug it in 5.286 seconds…or not. I’ll see how that plays out.

Congrats to Tom Motry, Joe Haas, and the entire crew! This is 100% BangShift Approved bad-assery!

SCROLL DOWN TO SEE THE TIME SLIP AND WATCH THE VIDEO OF THE RECORD BREAKING RUN! 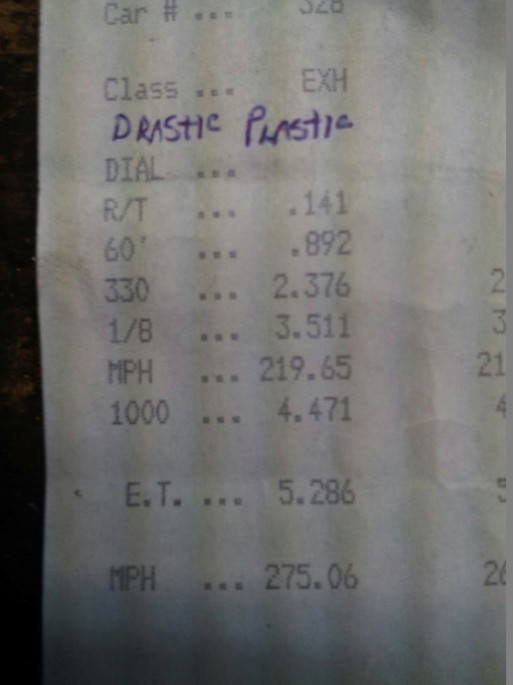