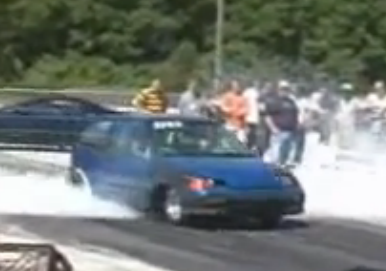 (By Greg Rourke) – Show of hands everyone!  Who doesn’t like a big motor in a small car?  Hmm…zero, just as I thought.  After Brian’s story about the small block powered Fiat 124, we were reminded of Roger Davis and his badass Geo Metro.
The Metro was manufactured by a joint venture of GM and Suzuki. Perhaps Suzuki should have stuck with motorcycles so their name wouldn’t be associated with these econoboxes. From the factory were equipped with a wet paper bag 1.0 liter 3 cylinder engine. Suzuki later upped the choice to a 4 cylinder 1.3 liter producing an underwhelming 70 horsepower. Neither of these choices was suitable for ol’  Roger Davis. He built a V6 Buick starting with a Stage 1 block. He added tricked out heads, some GNX parts for good measure, a larger than stock turbo capable of 30 pounds of boost and a conservative 50hp shot of nitrous to really wake things up (nitrous is our favorite intercooler).  Davis got a circle track chassis builder to build a complete chassis and cage, with a four link rear suspension and Ford 9 inch axle.  The whole deal weighs 2400 pounds with Roger belted in.
In the video we see the snotty little car run a mid 9 at 146. That was with the boost dialed back to 24 PSI to keep from blowing the 28×10.50’s off of it. Nitrous is activated in high gear for the same reason. Roger reports a best of 9.27 at 151 while shaking the car down, but feels 8’s are in it. He also remarked the car handles the dragstrip like it was a slot car. Once the car blew out a freeze plug at the top end, driving through its own water and the little Metro didn’t get out of shape.

PRESS PLAY BELOW AND WATCHING THIS LITTLE WRECKING MACHINE IN ACTION AT CORDOVA!

Video: This Insane 12-Rotor Rotary Engine Has Us Wanting One Bad - 5,000 Potential Horsepower Historic Sportscar Racing Ltd. Names Dorsey Schroeder as Competition Director For 2014 And Beyond