Video: A Tour Of Larson Race Cars, A Look At The Killer Projects, The History Of Larry, His Nova, and Drag Week Dominance! 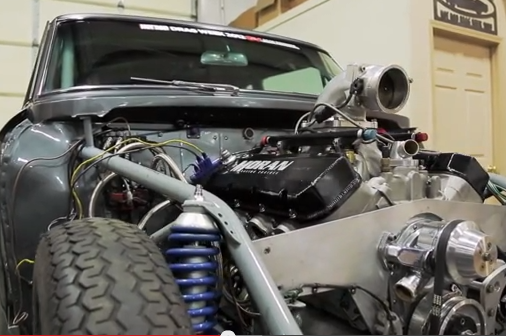 When my friends at Hot Rod called and asked if I’d be interested in hosting an episode of their YouTube show Hot Rod Unlimited at Larson Race Cars in Oak Grove, Missouri I was excited. Larry Larson (as you know) has won the vaunted Unlimited class at Hot Rod Drag Week five times running and he’s finished the event every single year he’s entered. He’s done it all in his 1966 Chevy II that first appeared at the event in 2005 with a 555ci big block Chevy and a 14-71 blower and has morphed over the years into a 565ci twin turbo combo that has slayed all comers since 2008. He’s been chased by Jeff Lutz harder than anyone and 2013….well 2013 may be interesting because Larry is contemplating his competition status this year. We think he’s showing up because there’s unfinished business. He’s the first six second Drag Week competitor, the first 200mph Drag Week competitor, and he really wants to be the first six second average Drag Week competitor.

When video ace Clint Stringfellow and I invaded Larry’s shop and spent the day as human oil downs wrecking any and all productivity (Hey guys, can you stop grinding back there?) for his guys and his wife Sherry. Larry was his normal awesome self, welcoming the intrusion and answering all of m pestering questions. Outside of the Nova, you’ll see some other cars that he working on like a 1957 Buick drag week car, Steve Matusek’s Aeromotive Pro Mod, and the wildest? A brand new ZL1 Camaro that had 36 miles on it before Larry and crew gutted it, cut it up, and have begun getting it ready to become an awesome modern pro street machine (that’ll also race on DW…suprise!).

This video will show you a little more about the man behind the Nova that we normally only see sweating, jamming Lenco levers, or bombing down the highway at 80mph in the most iconic Chevy II in modern hot rodding history. He’s the real deal and we’re happy to report he’s just as normal, humble, and awesome a guy as you hoped he would be.

PRESS PLAY BELOW TO SEE A SHOP TOUR OF LARSON RACE CARS AND TO MEET THE MAN BEHIND FIVE STRAIGHT DW UNLIMITED CHAMPIONSHIPS!

If you want to see Larson run his first 6 second pass, and cruise the Las Vegas strip, in his kick ass Chevy II watch the videos at the bottom of the page.

5 thoughts on “Video: A Tour Of Larson Race Cars, A Look At The Killer Projects, The History Of Larry, His Nova, and Drag Week Dominance!”