Video: An Update On The Viper Powered Maverick Project – Fuel Tank Fitment And A Roll Cage Fail With Bonus Guff! 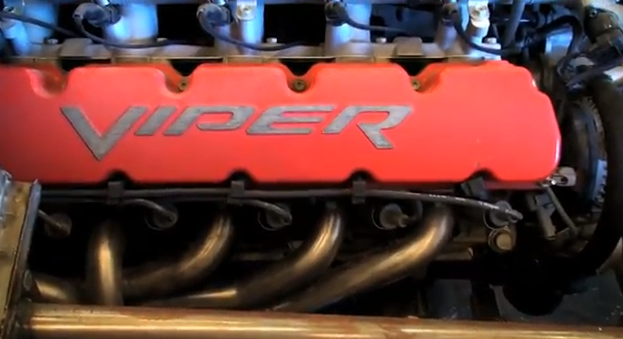 We’ve been following the adventure of our pal Jason Lewis and his cool Maverick project which he has seen fit to jam full of Viper V10 goodness. The car has been an on going project for some time which began life at his house and moved to a friend’s shop. That friend passed away and the car had to leave the building but luckily it landed at another shop that builds race cars, stunt cars, for movies, trucks, etc. Basically, it found the laboratory it needs to live in. Jason isn’t having the dudes at the shop finish building the car, he’s still working on it himself, albeit with their guidance…and ball busting as you’ll see in this video.

After showing us a quick bit of fabrication work in the gas tank area, Jason rolls tape of a couple guys from the shop going over the roll cage he had built for the car. In that good natured way that gearheads do, the dudes advice Jason that he needs to get the sawzall and remove anything that is “round and steel”…other than the steering column and the headers. Being professional level fabricators, they have a high standard and want to show Jason the right way to cage the car for his safety. That’s cool in our book and Jason will surely show us all the steps in the process.

We really dig this car and always look forward to Jason’s updates. Press play below to see this latest installment of the Viper powered Maverick build!

3 thoughts on “Video: An Update On The Viper Powered Maverick Project – Fuel Tank Fitment And A Roll Cage Fail With Bonus Guff!”