Video: Is This the Largest Group Burnout of All Time? 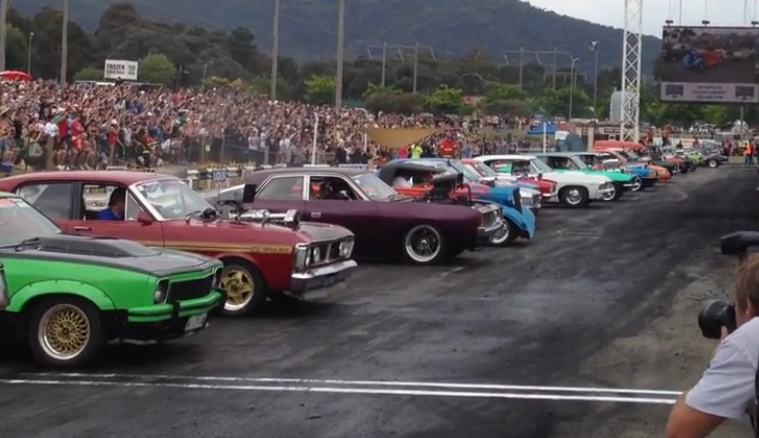 Australia’s Street Machine Summernats celebrated its 25th anniversary this year and they certainly did it in style. Rather than just fly some banners and sell some anniversary t-shirts, they did what wild Aussie’s do at car shows…a massive burnout. This wasn’t your typical blown street machine spinning Aussie burnout. Nope, this was a static job, just a good old brake stand as we’d call it here in the USA. The only catch is that the damned thing involved more than 20 cars!

In an effort to keep from killing any of the people involved in the actual burnout, to keep the spectators from being smoked out and to prevent the complete and final blockage of the sun from Australia’s skies, they kept it fairly short, but man is there an epic fog bank. The coolest part of the video to us is how they start the thing. A guy with a flag sprints from the first car to the last vehicle which looks like a desert racing truck and as he crosses by each car starts smoking the tires. This creates a pretty cool synchronized smoking effect!

Press play below to see one of the all time great burnouts!

Thanks for the tip Rohan!

Is Firebird International Raceway Going to Close in 2013? Event Gallery: The 2012 Race and Performance Expo - Race Cars and Parts Galore!

One thought on “Video: Is This the Largest Group Burnout of All Time?”