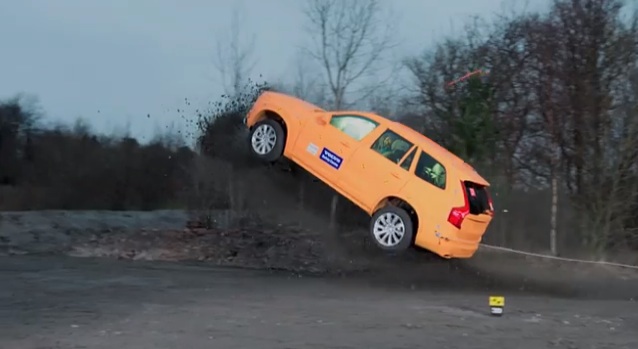 Volvo is hell-bent on making sure that the reputation of safety that they have spent decades building up doesn’t go to waste with one bad vehicle. They test and test some more, and short of seeing if the car can survive having an aircraft carrier dropped on it, they tend to live up to all expectations. But it isn’t enough to just do the typical front, side and rear impact tests for the company…oh, no…in addition they do some rather creative tests, such as the “robocoaster” device that can test the dummies before they get into a car, a “moose crash” simulator and a slide system that, in layman’s terms, tosses a car into a rollover crash. You’d almost be forgiven for thinking that the Mythbusters were roaming around the Volvo Crash Center with notepads, getting ideas.

This video is the “off-road ditch test” of the new XC90 SUV, which tests the Run Off Road protection system. The family hauler is accelerated to 25mph and shot towards a culvert, mimicking either a ditching, an uncontrollable accident that could be the result of ice, or an incapacitated driver. Once the vehicle detects that the tires have left the pavement at high speeds, the seat belts retract, a device between the seat frame and the seat occupant’s spine inflates to provide protection, and once an impact is detected, the airbags go off and a pin for the brake pedal is released, allowing the pedal to go free. Does it work? It’s Volvo, so “yes” is the only acceptable answer before they sell one car. But the part we like is that the company is launching SUV’s into the air in the name of human safety. That’s just cool.

Project Buford T Justice's Last Stand On The Dyno Video - Who Won The Shirt? How Much Power Did It Make? What's Happening Next? Ruined Or Rad? This 1966 Lincoln Trar Is Something Else, And It's For Sale!