Watch a Hot Rodded Duramax Diesel Break Itself Off of an Engine Dyno During a Pull! 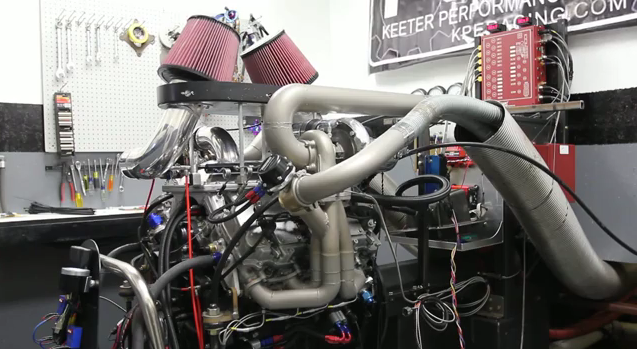 The guys at Nitrous Express have always been into diesels. We all remember their bitchin’ Duramax powered Mustang that went on Drag Week and knocked down insane elapsed times with killer economy. Last year the company built a 100% bad ass diesel powered dragster based off of a 280′ chassis with power coming from another totally pissed Duramax that is of course turbocharged and nitrous injected. This video shows the dragster engine making a pull and literally breaking the engine mounts off of the dyno!

According to what we have read, the engine made almost 1200hp and 1800+ lb/ft of torque on about 25-psi of boost. In race trim the guys were planning on running about 45-psi along with a commensurate increase in nitrous as well, we can only guess. At that point it would seem like we’d be talking about a diesel engine making in the neighborhood of 2,000hp and who the F knows how much torque, 3,000 lb/ft? Your guess is as good as ours.

We dig this video because the motor sounds awesome and it obviously makes incredible grunt to forcibly remove itself from the engine mounts on what appears to be a pretty nice dyno setup. We’ve said it before and we’ll say it again. The ultimate gearhead bragging right is when someone asks you how much power your motor makes and you can look ’em in the eye and say, “Not 100% sure…it broke the dyno.” Instant hero status!

Press play below to watch the Nitrous Express Duramax lay waste to a dyno!

One thought on “Watch a Hot Rodded Duramax Diesel Break Itself Off of an Engine Dyno During a Pull!”