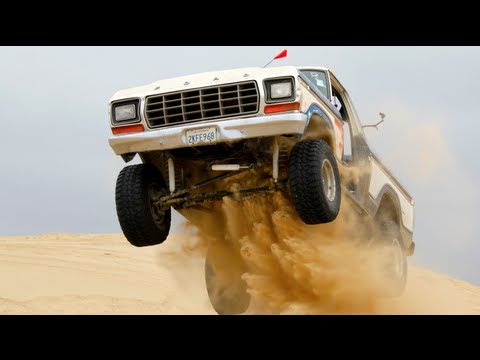 We’re late to the party on this one, but Freibuger and Finnegan’s latest Roadkill adventure has been set live on the interwebs and we think it is a pretty good one. The guys take on Peterson’s 4-Wheel and Off Road staffers Rick Pewe (the editor and a legendary figure in the 4WD scene) and Fred Williams (a complete lunatic that writes some of the coolest stuff you will read anywhere each month) in a cheap truck off roading challenge. DF and Finnegan end up with a late 1970s Ford Bronco, Pewe with an old Toyota, and Williams with a 1980s Suburban that has a stick shift in it!

What’s cool about this one to us is that it is pretty real world. The trucks are all along the line of what a guy could screw together for pretty short money and the challenges aren’t totally dumb, they actually test the off road ability of the trucks. The fact that the guys break each other’s chops the whole time adds to the fun as well. As an aside,Suburbans with stick shift transmissions have to be pretty rare. In fact, we’ve never seen one before this video. Who else had no idea they actually made that combo?

Press play below to see these guys race, jump, mud bog, and generally thrash the hell out of three cheap trucks! Looks like big fun to us!