Watch A Wheel For The Bloodhound SSC Get Spin Tested To 1,100 MPH In A Huge Test Rig 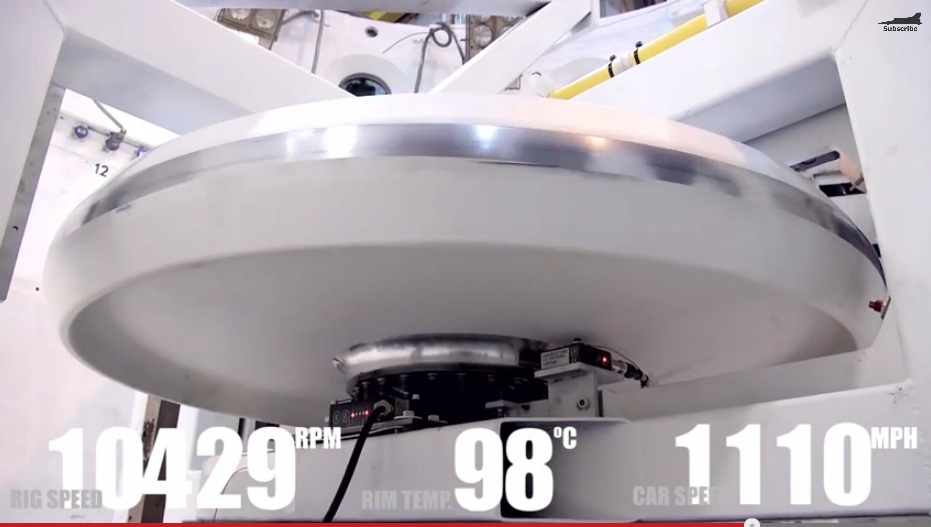 One of the things we have long admired about the Bloodhound SSC project is that the organizers and builders have managed to turn the whole venture into a huge source of national pride and teamwork among the people of the UK. From private industry to the education system, the Bloodhound team has really worked hard to get the entire country behind their quest to be the first to break 1,000mph on land. We have showed you various parts of the car as the team as released video of them coming together. From Andy Green’s cockpit to the some of the early testing, the media end of things has been handled as well as the PR side, if you ask us. Today we’re back with a new video and this one shows just one element of the testing that has to happen on a vehicle that will be going the sound barrier PLUS a flat out Bugatti Veyron more.

Why do you need to spin test billet wheels? Simple, because no one has ever driven on one at 1,000mph and everyone wants to see Andy Green succeed, get out of the car and wave to the assembled masses (or an empty desert, but you get the idea). The wheels were tested at Rolls Royce on a spinning rig designed to test the fan blades that are used inside the company’s successful turbine engines. As you will hear in the video, they had never spun anything as fast as they do this wheel. Engineers are paying attention to stuff like the heat the wheel generates simple through the friction of the air and how much it grows (or does not grow) under the tremendous centrifugal forces at 1,100mph. We’re going to imagine that the thing will get a lot hotter with the weight of the car on it and the friction created between the wheel and the ground, but this is a good baseline test.

Pay attention to the little sign on the lid of the test rig as it is lowered down onto the base. If you want to know how strong the “room” that the wheels is in, note that the roof section weighs more than 22,000lbs! In the event this thing were to fail, the walls need to catch all of it and judging by the looks and by the fact that the roof weighs 11-ton, it is set up to stop every last bit of shrapnel from leaving.

PRESS PLAY BELOW TO SEE A WHEEL FROM THE BLOODHOUND SSC PROJECT GET TEST SPUN TO 1,100MPH

Grab A Bag Of Doritos And Watch These Wicked Rotary-Powered Rides From TX2K16! Roadkill's Muscle Truck Is Up For Auction! If You Have Lusted After The Loud And Proud Chevy C-10, Now's Your Chance!

2 thoughts on “Watch A Wheel For The Bloodhound SSC Get Spin Tested To 1,100 MPH In A Huge Test Rig”