Wherever I May Roam: The Vityaz DT30 In Action In The Worst Off-Roading Terrain Ever! 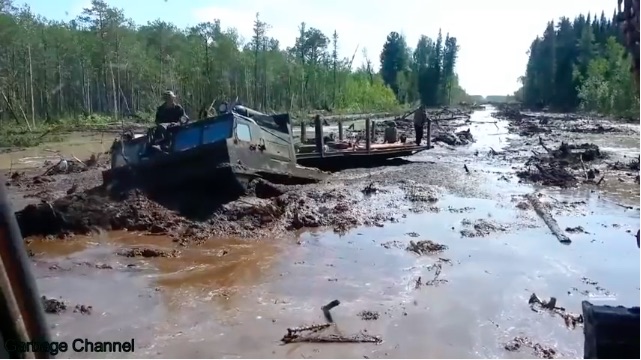 For those who haven’t spent a lot of time around the military, let me assure you: tanks and tracked vehicles are not the normal, everyday deal. You’ll see them, but they rarely get used on a day-to-day basis. They’re too big, too bulky, too thirsty, and are generally more of a pain than they are worth for some random errand or task. I’m not talking something like an Abrams tank, either…M113 armored personnel carriers, M901 ITVs, M9 earthmovers, M88 heavy wreckers, and others are simply too much to deal with for day-to-day work. In their place are HMMWVs, 939-series and LMTV trucks and the occasional CUCV that is somehow still alive after thirty-odd years of service. In North America, wheeled vehicles can handle just about anything the terrain can throw down with reasonable expectation.

In Russia, however, it’s a wildly different story. There’s tundra, taiga, trails that seem to be composed of six feet of soupy mud for miles on end, and the entirety of Siberia to contend with. While we’ve seen video proof that wheeled vehicles can be worked out in those hellish conditions, it’s vehicles like the Vityaz DT30 that are the real beasts. They run a 12-cylinder that operates on virtually any kind of combustible fuel which sits behind the operators in the first van body, and in the second van body you can have anything from a passenger transporter to a mobile oil refinery on the back. That second van isn’t a drag-behind, either…power reaches all of the tracks of the tandem setup. Capable of moving over 30 tons of whatever needs to be moved in the muck and mire, the Vityaz is a beast that is used not only for Russia, but the Arctic, Antarctic, and in other locations around the world.

Bad Kitty: This Hellcat's Dyno Day Ended In A Spectacular Fashion...And Burning Brakes Engine As Art: This 1955 Lancia V6 Is A Power Plant Too Gorgeous To Hide Under A Hood

3 thoughts on “Wherever I May Roam: The Vityaz DT30 In Action In The Worst Off-Roading Terrain Ever!”