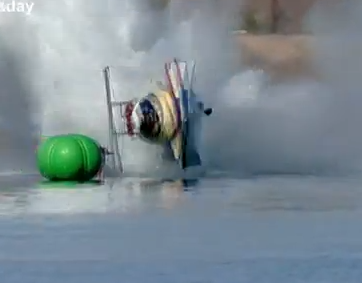 Call me names if you want but drag boat racing terrifies me. I’d sooner sit in the co-driver seat of a World Rally Car hurtling through the Finnish woods than I would strap myself into a high horsepower drag boat. This video is further proof of the sanity these racers are lacking. Lloyd Bell is the driver of the boat we see in the video. Bell was attempting to make a lap at Arizona’s Firebird Raceway at the IHBA sanctioned world finals. As you’ll see, his boat comes off the starting line well but never quite settles down. As the small craft begins to pick up speed rapidly, it also starts picking up some air under the hull. It takes about two skips over the top of the otherwise calm water and the boat jumps clear out of the water, slams down and comes apart like it is made of balsa wood and gum. Obviously, all of the energy dissipating like that is a good thing for the driver, but it is spectacular to watch, especially the engine, which skips across the surface of the water like a stone.

The wreck is shown a few times at varying speeds. As impressive as the slow motions shots are, to see it in real time gives the viewer the best idea of how quick and violent this crash was. The boats are packed with technology to help drivers live through crashes. We’re sure the safety capsule that Lloyd Bell was riding in certainly helped him live through this wreck that could have been fatal a couple decades ago.

Lucas Oil posted this clip on their YouTube page as part of their Wreck Wednesdays program. Subscribe to their page and get a crazy wreck video (and cool other videos) every week.

PRESS PLAY BELOW TO SEE THE INCREDIBLE VIDEO!

CLICK HERE TO VISIT LUCASOIL.COM AND KEEP ON TOP OF EVERTHING THAT IS GOING ON IN THE LUCAS OIL UNIVERSE!

Question of the Day: Is it OK to Spec a new Camaro or Mustang With a V6? Cruise Gallery: Cruising South Congress St In Austin, Texas During The Lonestar Round Up