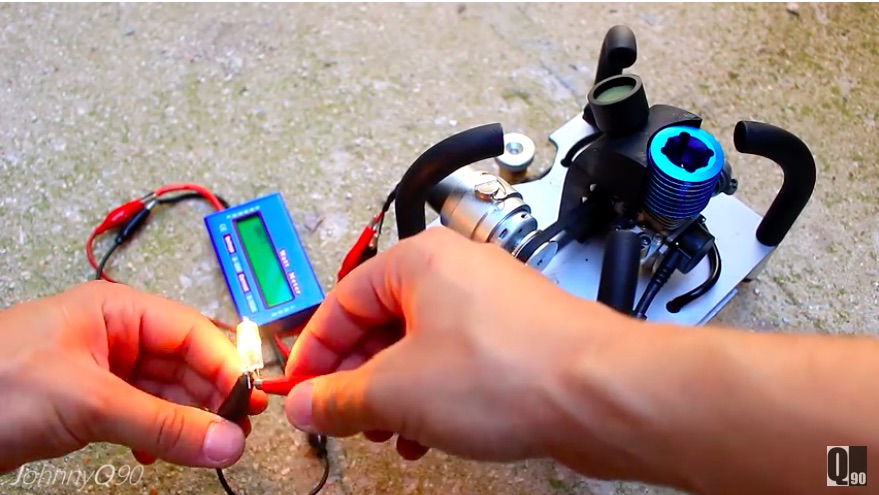 Ok, now this is awesome. Yes, many of our readers are going to be asking stuff like, “Why?!” and “What’s the point of this?!” The reality is that the point is trying to figure it out and making it yourself. There’s a lot happening in this video, especially on the making stuff end. Lots of little parts made or tweaked on the lathe, some creative thinking and work done by the builder and the payoff is a screaming little engine that actually makes electrical stuff work. How awesome is that?! This is definitely a project that took time and as you will see, there was some legit CNC action involved along with all of the “hand work”.

The dude on this channel has done other small “nitro powered” project like using one of the little engines as an air compressor and stuff like that. We dig the fact that he uses these little nitromethane engines to actually do work, something that they were never really designed for in the first place. Yes, they “do work” but that works is sending a little plane, a little boat, or a little car off and zipping around the world. No one ever looked at one of these things and asked if it could have some practical value.

The answer is that in small doses, it can. That’s only if you are creative and talented with machine tools, though. This dude is and he made all the associated parts to make his engine that measures to about 1CC a literal power plant. That’s BangShifty as hell to us!

Press play below to see how to build a mini-nitro motor generator from scratch!