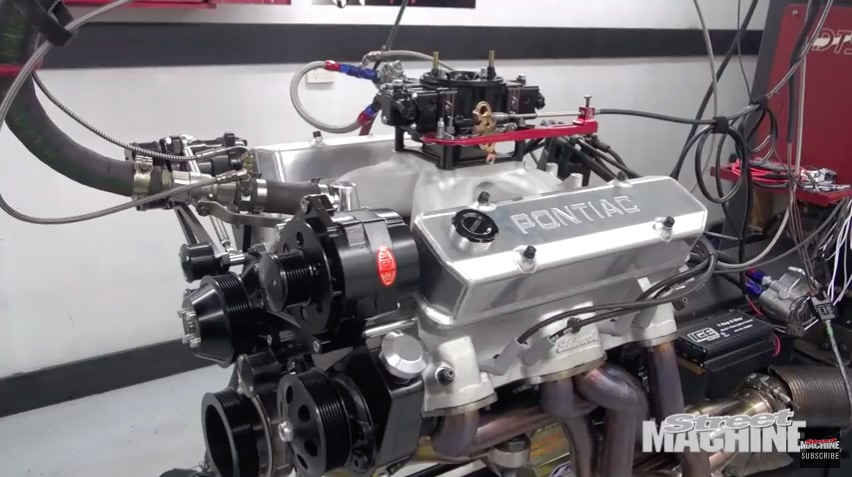 It has become a very common refrain over the years in hot rodding and it started all the way back in the 1930s and 40s with the advent of cheap V8 engines. “Just put a BLANK in it…,” is what people have been saying for 80+ years. The path of least resistance, be it physical, financial, or emotional is how human beings do business. Sure you can take some old engine and beat on it and boost it, and reengineer it into something bad ass but you can also just pull a modern engine from the wrecking yard and have about the same horsepower for way less work. There’s nothing overly wrong about this idea but it does kind of run counter to the idea of hot rodding and taking what you have and making it better with your own two hands or at least maintaining the soul of your hot rod.

In this video from Australia we see a gnarly 535ci Pontiac engine getting pulled on the dyno. Yes, it is an aftermarket Pontiac engine but it has the right style block, the right style heads, etc so we’re sticking with the Pontiac nomenclature. It is going into a Pontiac and to us, that seals the deal on its coolness. The 688hp and the 677 lb-ft of torque that the thing makes and the fact that it does it all before 6,000 RPM is pretty boss. Whatever car this thing lands in will really haul some serious ass.

The engine builder laughingly says that he tried to talk the dude who footed the bill on this engine into a big block Chevy but the customer wanted a Pontiac engine. Again, we do not blame the engine builder, he was trying to save the guy some bucks, but we’r glad the customer stuff to hid guns and ended up with this.

We’ll see if any big block Chevy guys are laughing when this monster takes them on head to head out there on the mean streets!

Video: Ever Wondered How A Full Floating Rear Axle Worked? This 1936 Chevy Film Explains It Wonderfully! On It: Ride Along In A Flying BMW M1 As It Absolutely Tears Around Spa In Belgium - Awesome!