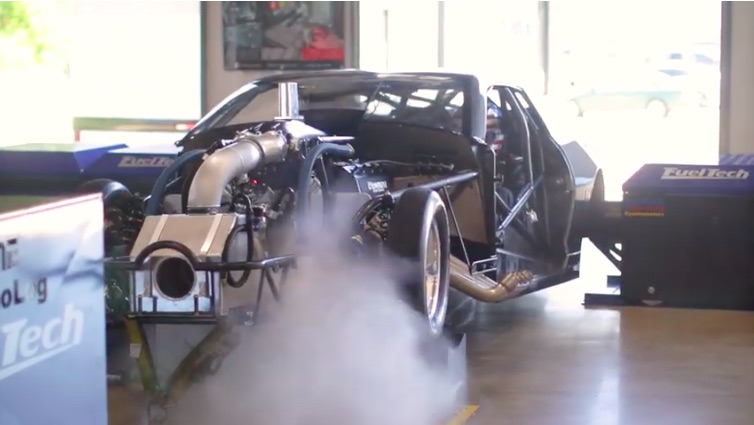 No Prep drag racing has evolved swiftly over the last few years. What was once a scene that appeared at small tracks across the country has crossed into the mainstream of the sport in a major way. With its raising profile and with its raising purses and potential winnings, the equipment has gotten better and better as well. The fact is that in any sort of human activity, the longer we do it, the better we get at it. The better we make the tools to do a job the quicker and cleaner it gets done, right?

For Alex Laughlin, racing NHRA pro mod, NHRA pro stock, and radial vs the world was just not enough. He built this killer No Prep Camaro and the car is finally at the point of being ready to hit the track. Before doing that though, he and his dad decided that they wanted to tune it on a hub dyno. For a million reasons, you’ll see why this was a good idea. To start with, the ever growing popularity of the hub dynamometers like the one we see here stems from the fact that they can manage massive horsepower and they can do it with a repeatability which gives tuners and builders a way to have a new car much further along in the tuning process before it ever gets to the track. That’s a win. Secondly, these machines work the car hard enough to expose problems, flaws, and mistakes on the dyno and not on the track. That gets illustrated here.

Lastly, there’s something kind of humorous about the no prep scene when you need a car that makes 3,200 rear wheel horsepower to actually compete. Make no mistake, you do. Yes the first round may be a little sketchy but we know as sure as we’re typing this, a couple of rounds in, that track is as bad ass as any you’ll find in the country. That is the nature of the business and while managing the 3,200hp saves your bacon early in the day, using it all in the final is how you win.

Money No Object: 1967 Buick Riviera GS - If You're Picking Just One Car, Have A Buick! Classic YouTube: The Many Faces Of The Significant Other On A Ride-Along!