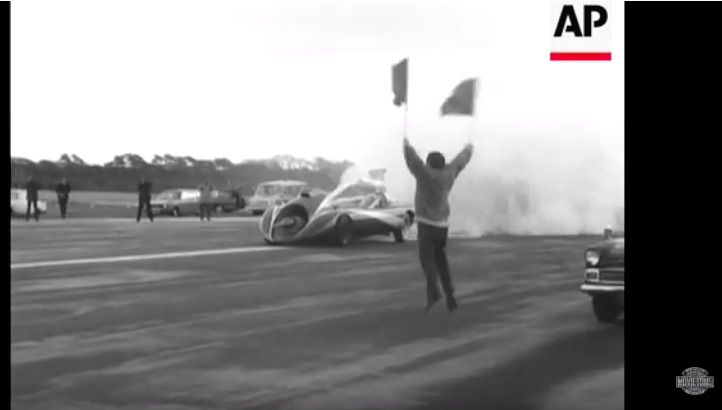 When it comes to personal hot rodding heroes, Art Arfons ranks damned close to number one on my list. Ok, he IS number one on my list. A guy from very humble beginnings, he was a self taught master of speed who held the world’s land speed record in the 1960s and dueled guys with way more budget and perhaps more book-smarts with the kind of pragmatic, empirical thinking that made hot rodding in America great. Everything he ever raced, he built himself and whether it was setting records on the drag strip, the Bonneville salt flats, or become a bad ass tractor puller, the dude just got the job done. He did it with a kind of quiet that is reserved for the smartest of our species.

This video was made in March of 1970 at a place called Hurn Airport in a town called Bournemouth, England. I’m guessing he was sent there by Firestone or perhaps by people in England who wanted to put on speed exhibitions but there is no real answers that we can find. It would have been a pretty solid expense to either float the Green Monster over there or fly it in a cargo jet so someone literally paid the freight on this trip.

Anyway, Arfons did not disappoint. He managed to reel off a 275mph run at this airport. Unfortunately the second run did not have a speed because of a trap malfunction but 300mph claims were made. True? Who the heck knows. The irony here of course is that the English were a dominant force in land speed racing before the American hot rodders took the helm and pushed the records into the stratosphere. Arfons was one of the guys who did it with horsepower and sheer balls.

This is an awesome film.

Press play below to see some awesome video of the Green Monster in England!

Rocking A C3 Corvette? Holley Has Released Braking, Suspension, and Fuel System Components Just For You! Scrapple, Your Guide To The "meh"-Worthy News! This Week: The Shut-In Special!

4 thoughts on “Watch Art Arfons Blast An English Runway At 275mph In This 1970 News Clip – Awesome!”