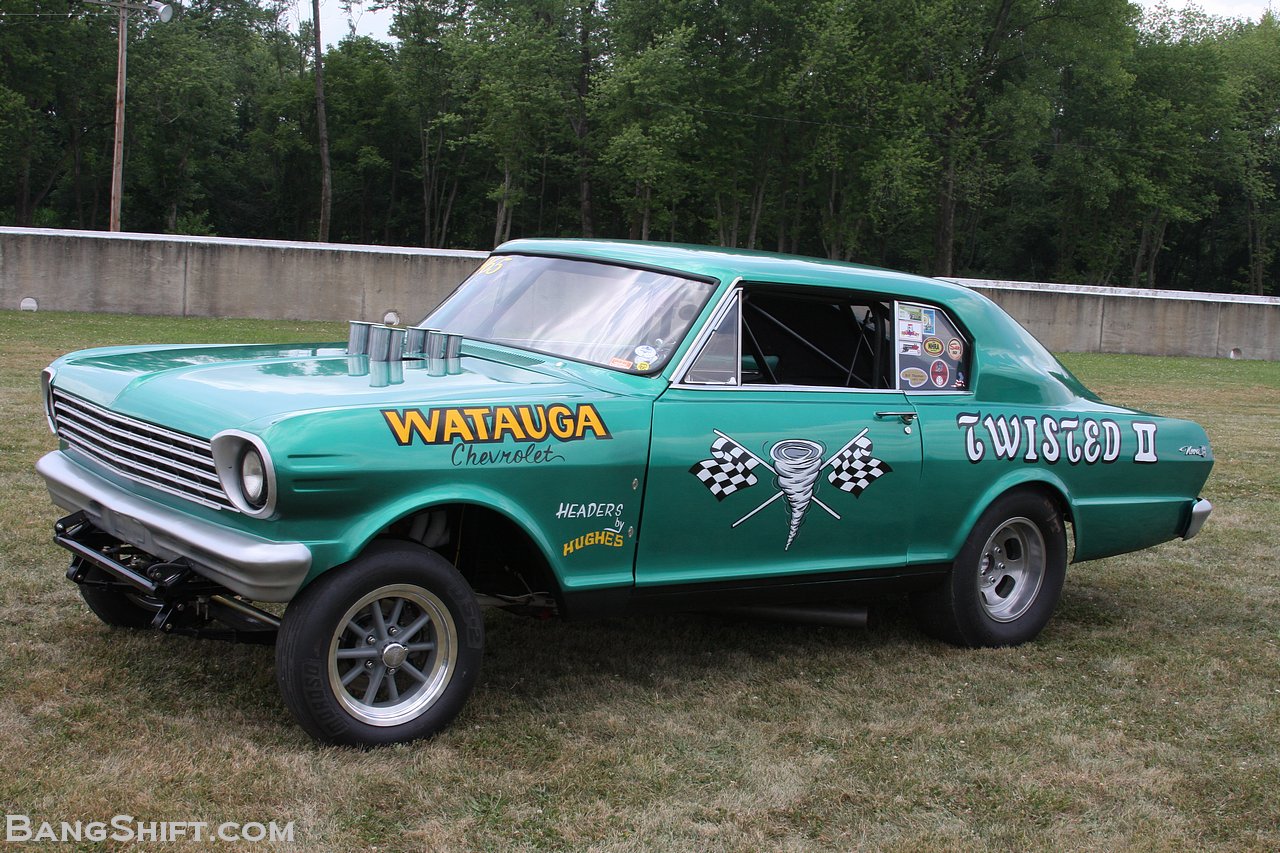 While rolling around the pits during the 2012 Holley NHRA National Hot Rod Reunion in Bowling Green last summer something strange caught my eye. It actually caught my entire body as I executed a full throttle U-turn and sped back to the pit space occupied by Tennessean Kelvin Cannon and his girl friend Christy. Thankfully they didn’t run for cover when I went running over yelling, “Is this a real one?!” Kelvin told me that it wasn’t but that he had constructed this car himself over the span of about three months. I was referencing the cars that served as the model for this one, a handful of Chevy Novas built by the factory initially to go stock car racing, then road racing, but ultimately ended up drag racing. Five original cars were constructed and Kelvin’s is close enough to be considered a sixth in our eyes. So what’s the deal with the weird roof? Read on to find out. 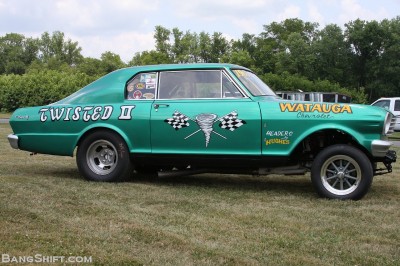 The story begins in 1963 when the big three in Detroit were beating each other over their heads at an ever escalating pace on race tracks across the country. Each company had special projects, development work, and clandestine development departments going around the clock to stay ahead of the other. One of the ideas that came from the GM camp was to improve the aerodynamics of the Chevy Nova for road racing and stock car racing by adding a sloped roof or what we now call a “fastback”. Plans were hurriedly drawn up and five 1963 Nova convertibles were shipped to the Corvette plant to have fiberglass hoods, fenders, doors, bumpers, and most importantly roofs made. The guts of the convertible tops were removed, the ‘glass was melded to the steel quarter panels and the cars sported a unique…if not a little weird…fastback roof at the end of the process. The cars then had Corvette independent suspension installed and were shipped to Bill Thomas Race Cars on the west coast which was like the Area 51 of GM racing at the time. Thomas was shipped five “mystery” motors that were to be installed in the cars before they were sent out into the world. Then GM pulled the plug on all of their racing. They called and demanded the engines back but Thomas was able to keep the five cars to settle a debt that GM owed him. Initially they were supposed to be crushed. Thomas then took the cars, converted them into drag machines by relocating their rear axles, adding his funny car front clip kit, and ditching the IRS for straight axles. As best Kelvin knows, none of the cars left Thomas’s shop with an engine in them. One was supposedly turned into a street car, one was wrecked in a high speed crash not too long after getting on the track, and three of the five had long careers and exist in some form or another today. Kelvin’s is probably the most accurate reproduction of a fastback Nova in the world and he built it himself…in three months without having ever seen one of the real cars in person. 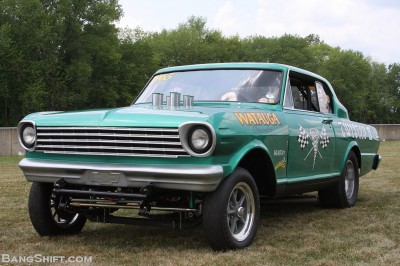 This car started life as a junkyard take out that Kelvin had hounded Tex Scalf to buy for three years before the car showed up to his shop on the back of Scalf’s ramp truck. Studying photos and magazine articles that were published at the time the cars were built, Kelvin scanned articles and studied them to get an idea of scale and size with respect to the roof and the other custom pieces on the car. His research paid off because he has been told by people intimately familiar with the originals that his rendition is just about dead nuts on. Obviously there are a couple of small modern additions, like an MSD ignition system, 12-point cage, and front disc brakes, but that is all stuff that basically hides itself and the appearance of the car is very true to its rare roots.

AS WE LOVE TO DO, WE’RE GOING TO TELL YOU THE REST OF THE STORY THROUGH PHOTOS AND CAPTIONS – SCROLL DOWN BELOW TO SEE THIS AMAZING HOMAGE TO ONE OF THE MOST OBSCURE CHEVY DRAG MODELS OF ALL TIME – THE FASTBACK NOVA! 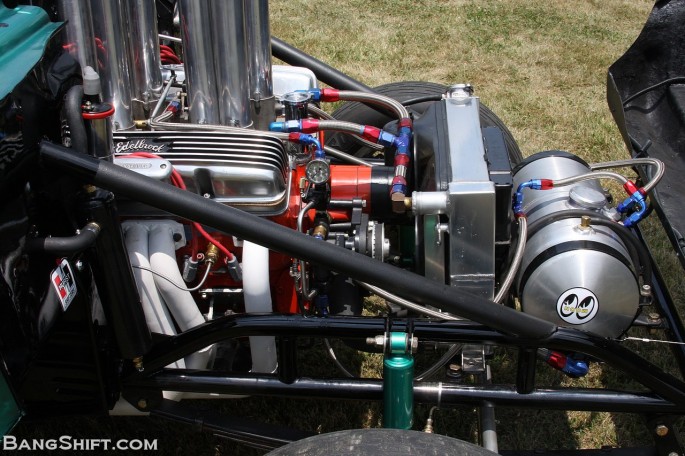 Starting up front, Kelvin reproduced a virtually perfect copy of the original Bill Thomas funny car front end kit through old photos and articles. One of the major differences in this construction is the use of larger diameter chrome moly tube on both the upper and lower rail. Thomas used different diameter tube in his design from the 1960s but it no longer meets NHRA spec for a car that goes the ETs that Kelvin wants to go. 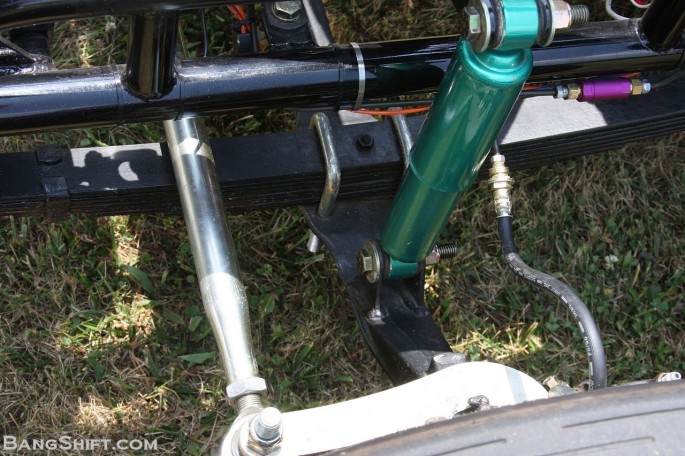 Just like the old Thomas kit, the front axle is from a 1954 Chevy truck. Springs are from the same truck with two leafs removed from each pack. Out back, Kelvin started out with leaf springs to be correct to the original cars but the Nova was such a wheelstanding, axle wrapping animal, he went to a more modern four link. It took five passes to make that decision, so it must have been bad! Incidentally, Bill Thomas offered a tube axle with his kit as well but Kelvin wanted to stick with the truck axle and we totally approve because it is cool as hell. 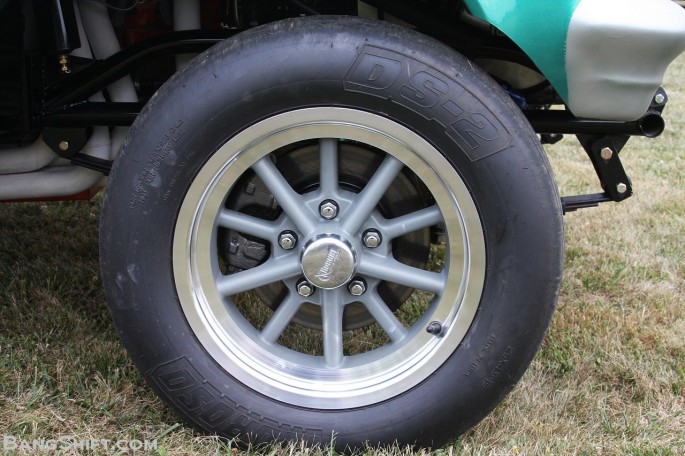 Rocket Racing Launcher wheels are bolted to the ends of that front axle and look retro awesome for the 1960s feel that this car has. A Speedway Motors disc brake kit does the stopping duties up front. 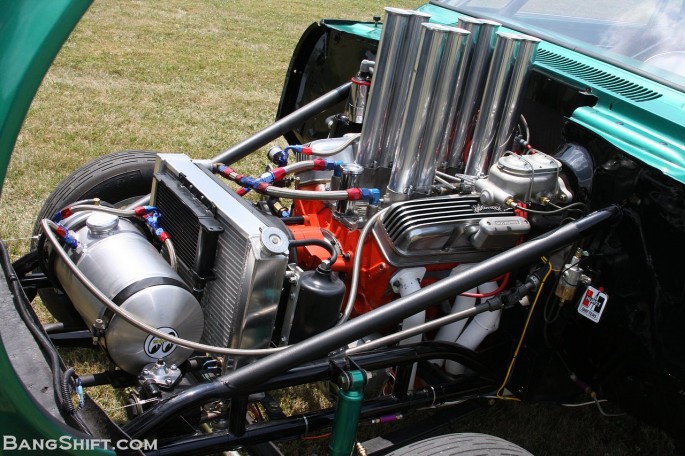 That’s a little 5-gallon Moon tank up front and it uses just about every drop in itself to feed the car through a run. Kelvin said that the Hilborn injected 377ci SBC burns 3.5-gallons on the way down the track and by the time he idles back, she’s just about dry! 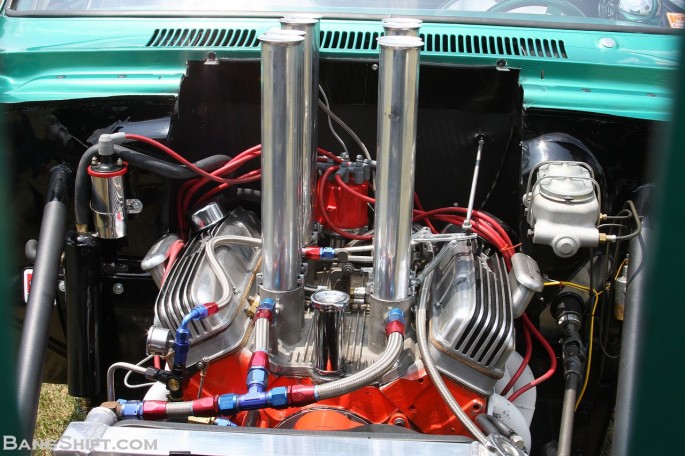 This Nova really sounds tops because of the alky burning 377ci small block engine providing the power. With 13.5:1 compression JE pistons, a COMP cam packing .652/.661 lift and 303/313 duration, Brodix heads, and two inch primary tube headers built by his buddy Roger Hughes, the little mill goes through the traps at 7,600 RPM. Best run to date is 10.80/128 but hopes are to probe the bottom of the 10s before the year is done! 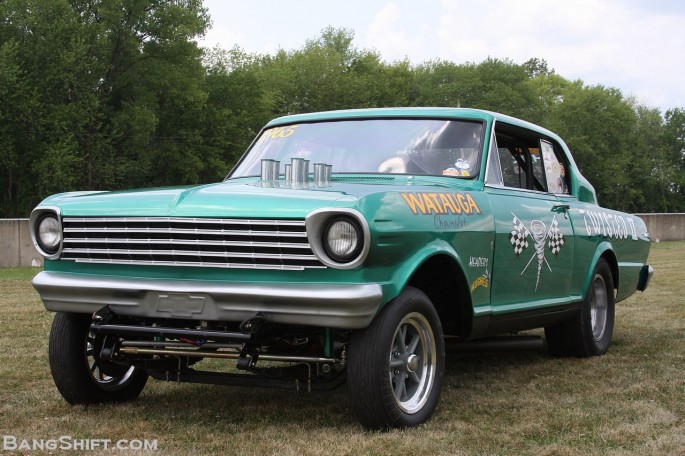 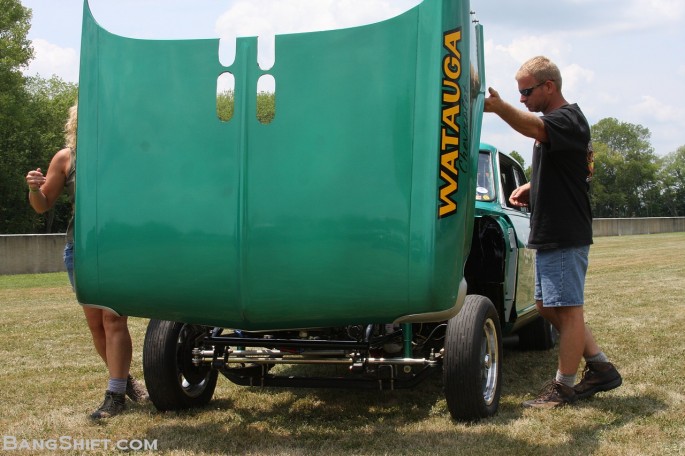 The original fastback Novas from 1963 had fiberglass hoods, fenders, and bumpers but they were not one piece. Kelvin wanted a one piece front end and VFN was able to produce it. He wanted us to pass along that VFN keeps all of their old molds so if you have some nostalgia waxing and you need fiberglass parts that “no one makes” anymore, call VFN. If they ever made it the mold will be in their storage. 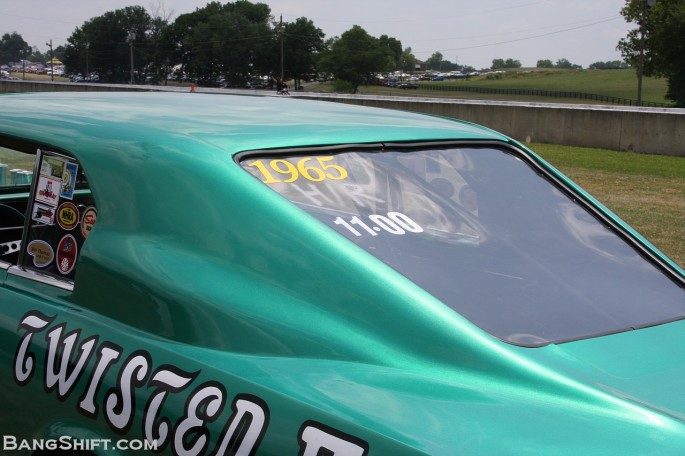 The star of the show so to speak is right here. This roof was all Kelvin’s work and he nailed it. Since these cars were all laid up by hand back in the day, there are variances and differences in each of the Novas that hit the strip decades ago. Kelvin is “within spec” of those differences. No drawings or official plans for these cars have ever emerged so there is no way of knowing about their design or if it was such a rush job that it was kind of an eyeball situation. Those kickouts on the side of the roof are correct and they were there to cover the gaping area left when the original cars had their convertible tops removed. The without those kickouts, there would be a big hole right down into the quarter panel. 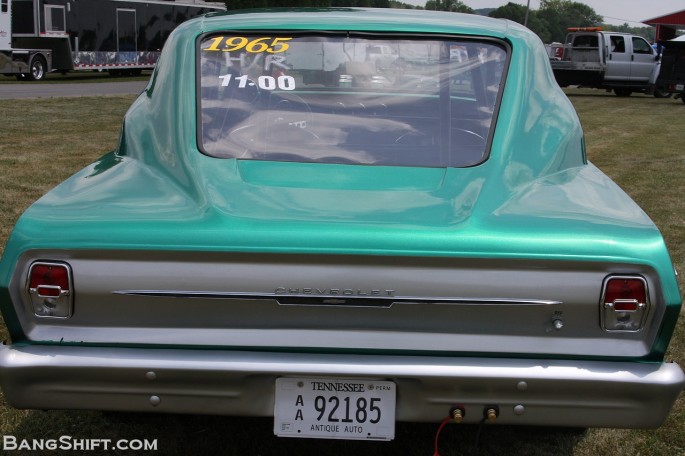 As you can see from this angle, there is no longer any access to the trunk of the car. The roof precludes that. 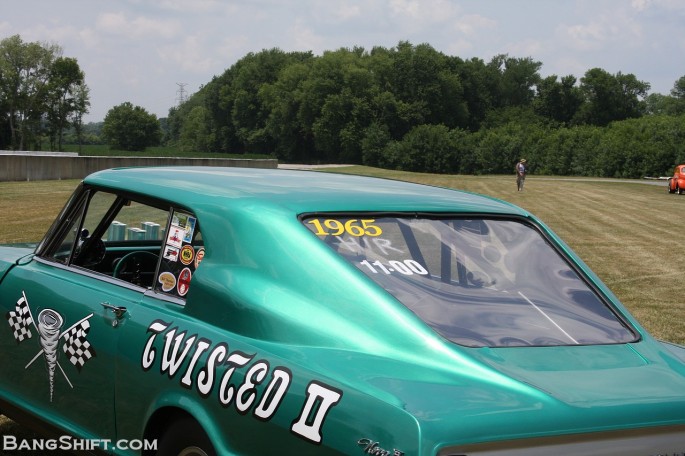 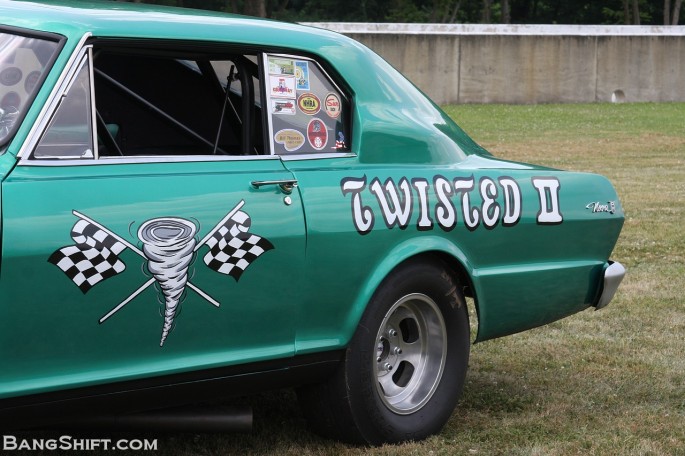 The lip on the rear wheel housing? Yeah, that’s from a 1968 Mustang fender. Kelvin cut it out of some junkyard fenders and grafted onto the Nova. Also, the paint job is neat and a bit of a play on Houston Platt’s famous “Dixie Twister” fastback Nova which ran match bash and A/FX meets all over the country. 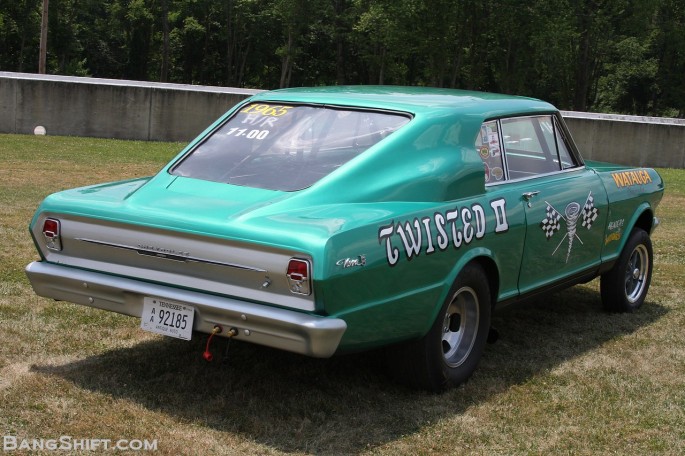 Like all experimental stuff done in a rush, there were some issues with the cars. One of these cars, campaigned by Alan Green Chevrolet had its roof rip off at speed during a run. Teams would strap them down and reinforce the lids to keep from having theirs tear off at speed. We have also heard that some guys cut vents in them to relieve the air pressure. 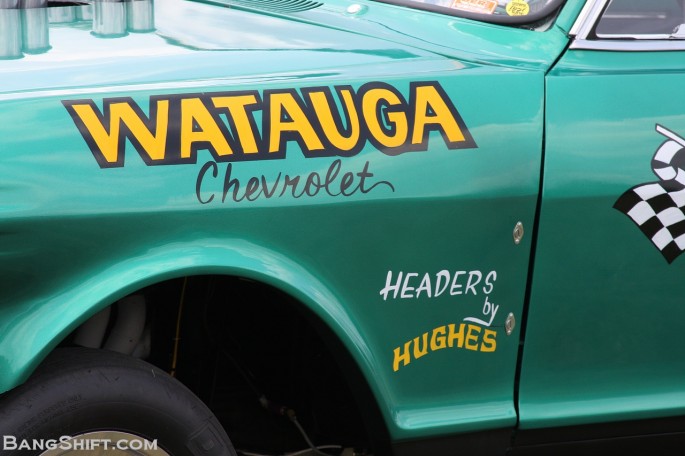 Since so many old school drag cars were sponsored by local dealerships, Kelvin decided to letter Watauga Chevrolet’s name on the fenders. Why that dealer? Its located in the same town as his repair shop. The Headers by Hughes is a fun nod to Kelvin’s pal Roger Hughes who built the fine fitting two inch primary pipes on the car. 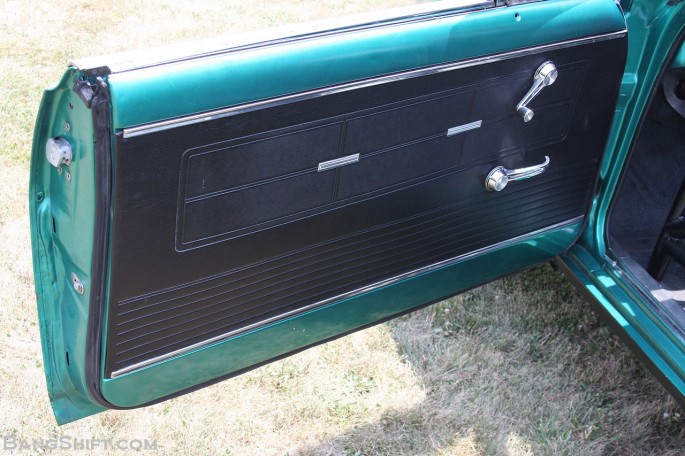 We really dig the interior because it is finished very cleanly and again, very right for the period he was shooting for. The factory door panels are simple and super clean. 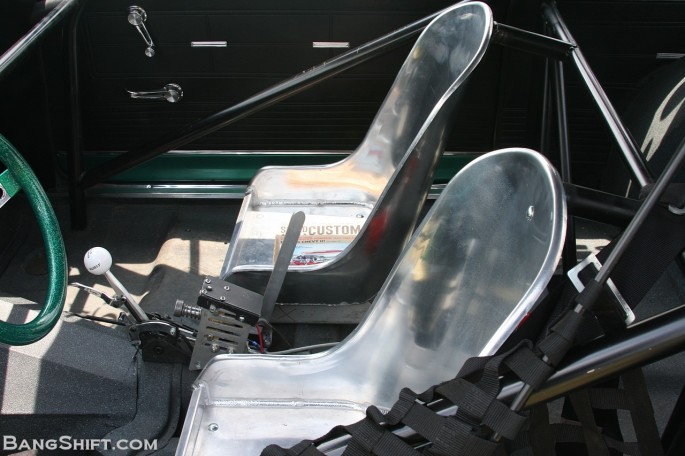 These Speedway Bomber seats are right at home in the cockpit of the Nova. They may actually be too spartan when compared with what would have been in the original cars. 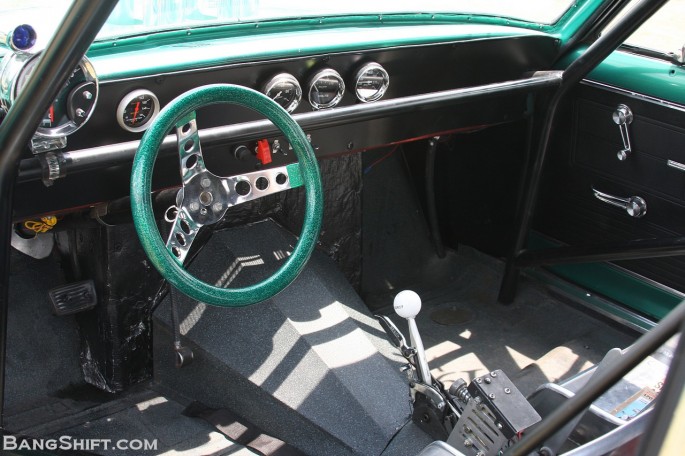 The speckled steering wheel is also from Speedway with a small selection of gauges from Auto Meter. 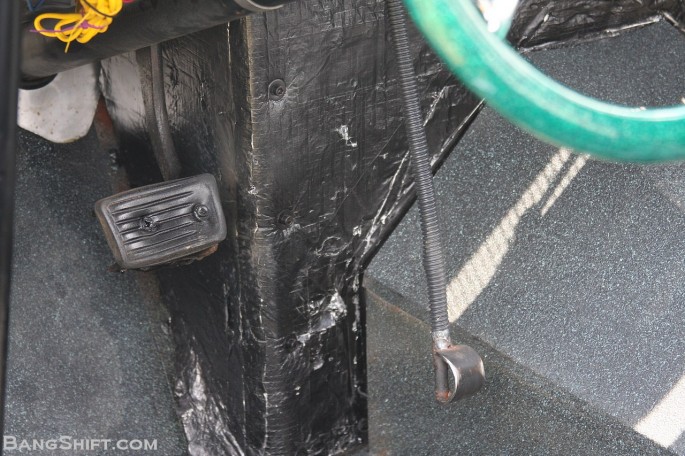 With the engine set back and the firewall modified, Kelvin had to go full custom on the gas pedal. We dig. 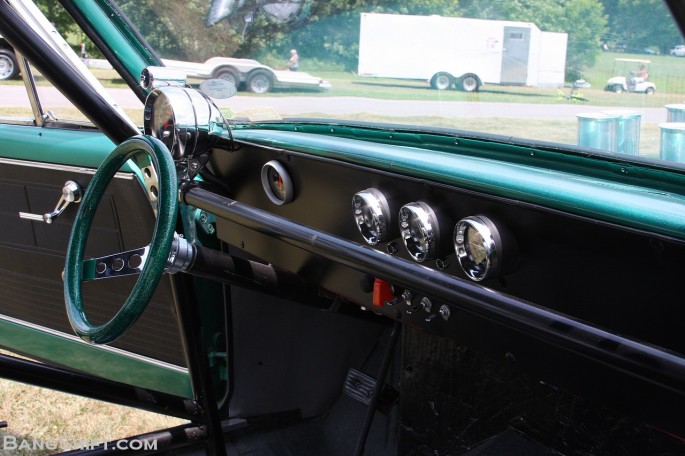 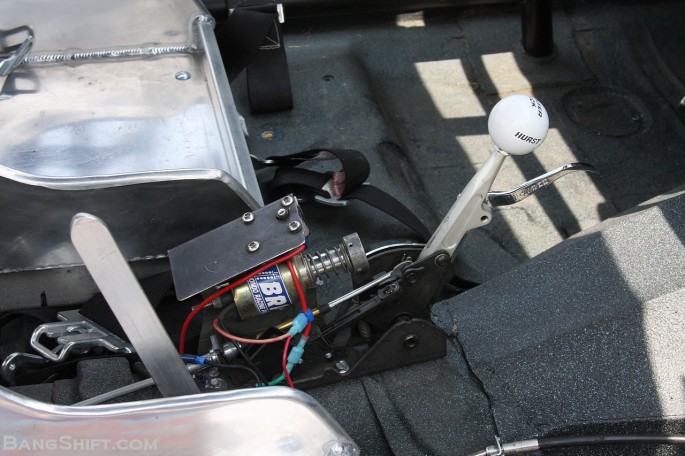 The transmission is a powerglide that sends the grunt back to a 4.88 geared Ford 9″ rear. 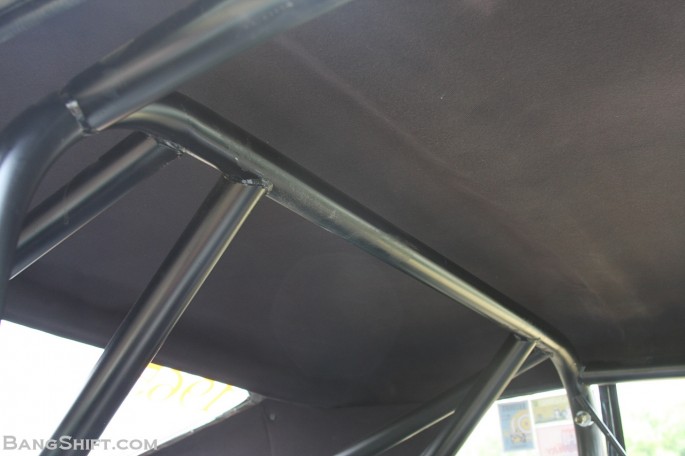 The ‘cage is a Jegs Nova kit that Kelvin installed. It fits very well. 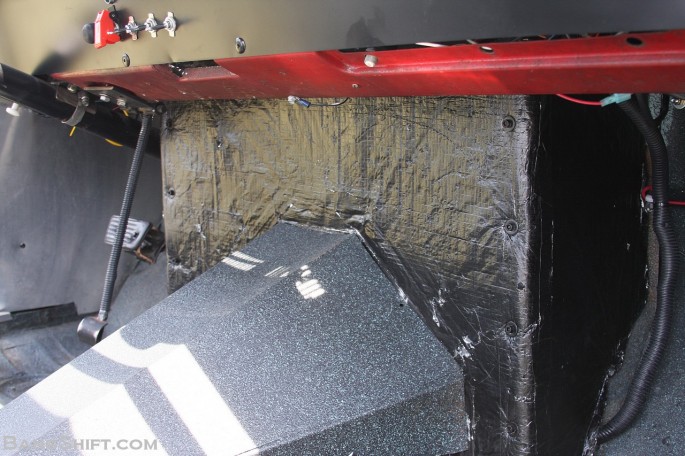 Another example of how far the engine is moved back in the car! 9″ is a bunch! 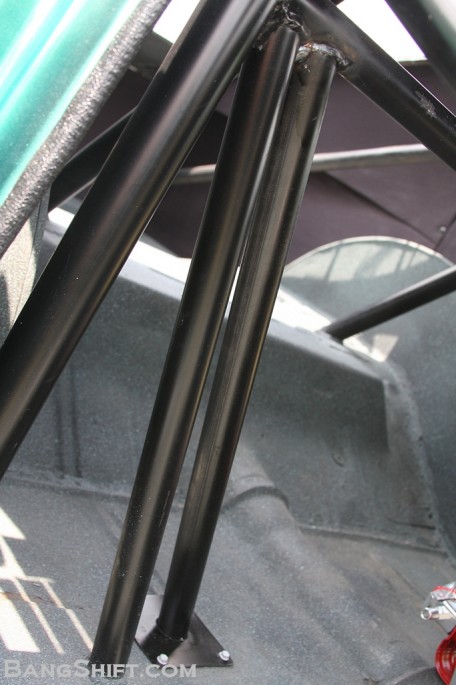 We asked Kelvin about these two bars and he told us that one is a bar for the cage and the other is reinforcement for the 4-link mounting point. 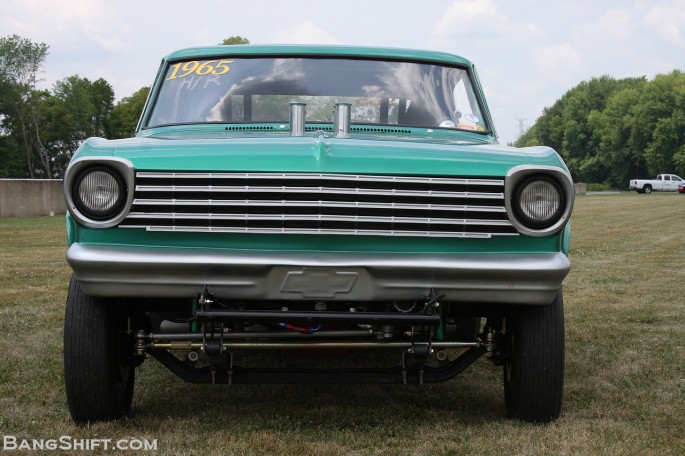 This is one bitchin’ Nova no matter the angle! We give Kelvin a ton of credit for tackling this project in three months worth of nights and weekend. He wanted to give special thanks to his girlfriend Christy for her putting up with his complete obsession in building and researching this car. He also wanted to thank Tex Scalf for being such a help with the body of the car and providing him with stuff like the rear end housing and those Mustang fenders he chopped up. 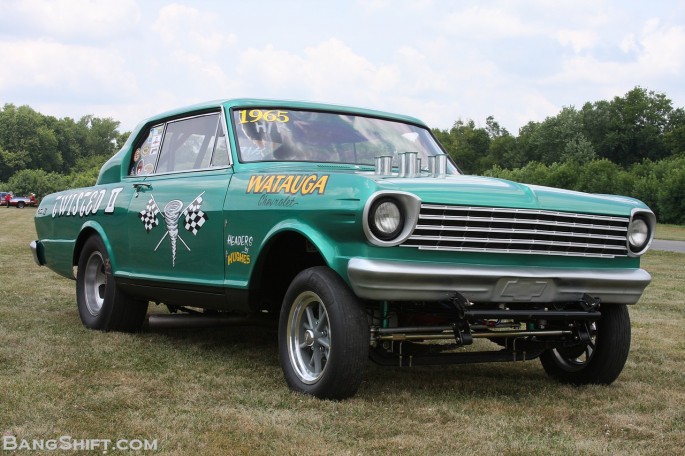 CLICK THE LINK BELOW TO SEE A FULL GALLERY OF THIS AWESOME CAR!