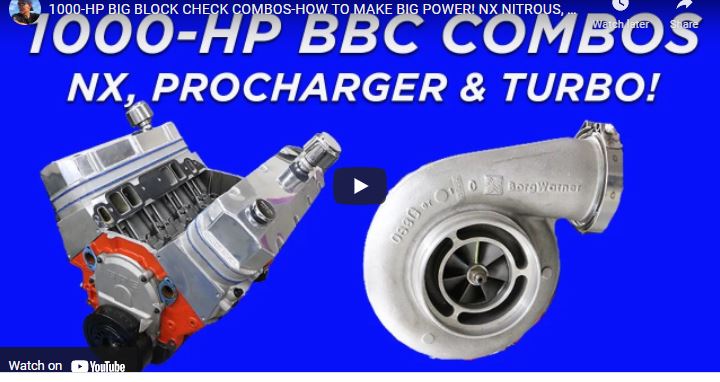 Which 1,000 Horsepower Big Block Chevy engine combo do you like most?  There are so many times that I’m at an event and someone comes up to me to talk engines and wants to know how to make a given power output. Many ask about 600 horsepower combos for their muscle car or truck, and many ask about building something with 1,000 horsepower or anything in between. In this new video series from Richard Holdener he’s going to go over different Big Block Chevrolet engine combos that make a given power number. He’s bringing us videos for 400, 500, 600, 700 etc all the way up to 1,000 horsepower.

When I’m asked about these combos at an event, I laugh a lot of times and tell them that that’s a junkyard engine build nowadays and they just look at me funny. But it is true! In a lot of cases an LS engine build can be nothing more than a camshaft and headers to get there. But what if you want a good looking big block for the look, the sound, and more, but don’t need anything crazy. Then this is the video for you. Here are three easy-to-build big block Chevy builds that would be perfect in your muscle car or truck!

CLICK HERE TO SEE THE OTHER BBC POWER COMBOS!

HOW CAN I MAKE 1000 HP WITH MY BIG BLOCK? CAN A JUNKYARD 454 MAKE 1000 HP? HOW MUCH POWER CAN I MAKE WITH NITROUS OXIDE? IS A PLATE NITROUS ENOUGH TO MAKE 1000 HP? HOW MUCH POWER DOES A PROCHARGER ADD? CAN THE F1A-94 SUPPORT OVER 1000 HP? DO I NEED AN INTERCOOLER WITH A SUPERCHARGER? DO CHEAP TURBOS MAKE POWER? CAN EBAY TURBOS REALLY MAKE OVER 1000 HP? SHOULD I TURBOCHARGE MY JUNKYARD BBC? IF YOU ARE LOOKING FOR BBC COMBOS TO EXCEED 1000 HP, CHECK OUT THIS VIDEO WHERE I RAN A NITROUS-INJECTED 565 STROKER, A 496 STROKER WITH A PROCHARGER AND A PAIR OF TWIN TURBO BIG BLOCKS, INCLUDING A JUKYARD 454 AND A BPE 540 CRATE MOTOR.