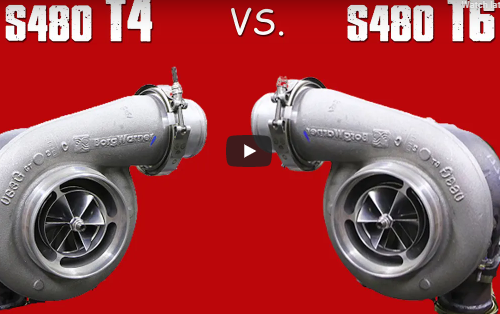 Bigger, bigger, biggest, biggestest, and biggerestest. That’s been the mentality on turbos the past few years, especially in the drag racing world where twin turbo setups often feature turbos right at or near 100mm, and where singles are closer to 150mm! But it isn’t just the size of the inlets, outlets, and turbines that matters when deciding on a turbo for your application. Nope, you also need to pay attention to the flange size, as this has a real impact on inlet exhaust flow from the engine. Now turbos don’t just run on exhaust flow, but are very sensitive to heat which is where the real energy comes from to spin one up, so does a smaller housing make more velocity and more power or does the bigger opening let more heat in? Hmmm. And does it depend on what size the engine is? The answer is yes to some of that, and no to others, and then again yes on both. We’ll let Richard explain in this video.

It’s the test everyone loves to see, where a stock bottom end junkyard LS is used to test a variety of boost building devices in search of big power numbers. In this particular test, a Borg Warner S480 is the boost builder of choice, and will be tested with both a T4 and the larger T6 hot side. The best part of this video might actually be Richard arguing with himself on camera though, so grab an adult beverage and when you are about halfway done with it press play. You won’t be disappointed.