LT Asks: The Actual Cost of Turbocharging a Big Block 8.1: Should I have built an LS instead? 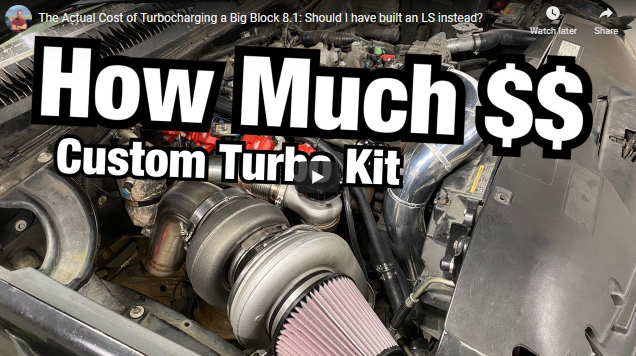 I’m a big fan of LS engines, and they are all the rage, but some people can’t stand them because they ARE so popular. Some think there is no other engine on earth that can compete with them. I happen to be a fan of horsepower, so I know there are a lot of great platforms for making it out there. With that said, I’m a Chevrolet guy to the core so I tend to lean towards Big Blocks, LS, and small-block Chevrolets. I own all three, in different vehicles, and I have plans for building at least one of each in 2021, including a possible turbocharged big block for a tow rig build. So you can imagine my intrigue when I saw that LT had a new video out with details on the costs involved in his turbo 8.1 build.

Keep in mind, that this project is a work in progress and that this 8.1 has had very little upgrades to the stock engine, as it will come out later and be built to make 1,000 horsepower to the wheels. So don’t confuse this with a build designed to see how much power you can make before it breaks. This is not that, and in this iteration it has very low boost.

Here is the description from LT. Watch the video and see what he thinks.

Everyone wants to turbocharge their car or truck, right? But the real question is what should it cost. If you can buy a turbo kit for your car or truck, the answer is simple, but if you have to build a one-off kit, the answer can vary widely but in this upload, I’m going over the real, out-of-pocket costs that I spend on Uglytruck. The second part of the discussion is should I have stuck with the 5.3 LS that was under the hood originally or was it worth my time to swap and turbo the 8.1?

NHRA Insider Podcast: Rumors, Scoops, and Top Fuel's Newest Team Owner Stiction Is A Fun Word, But Not Something You Want In Your Transmission. Hot Shot's Secret Shift Restore Is The Ultimate Stiction Eliminator