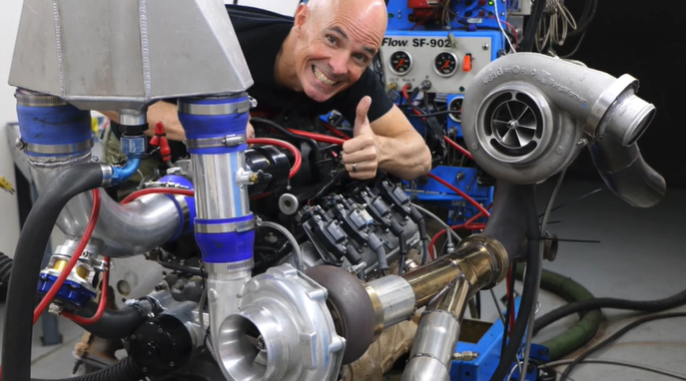 Compound turbos are nothing new, but have become a talking point again recently in a variety of racing and street applications. If you aren’t familiar, here are the basics. For this story we’ll say that there are three “common” turbocharger configurations, single, twin meaning one turbo being driven by half the cylinders and the second turbo being driven by the other half, and compound which is like two single turbocharger systems, with one feeding the other some already compressed air. Compound turbo systems have been around for a long time, and even came from the factory on productions vehicles, with one of the most well known being the 2JZ powered Toyota Supras.

In this video our pal Richard Holdener tests both single and compound turbo systems on a 4.8 LS junkyard build to see if one is really better than the other. But what is the compound isn’t as good? Is it still worth it because it’s cool as hell? Things that make you go hmmmm.

HOW TO RUN COMPOUND TURBOS ON YOUR LS. HOW WELL DO COMPOUND TURBOS WORK ON A CAMMED 4.8L LS? COMPOUND TURBOS LOOK AND SOUND AWESOME, BUT DO YOU NEED THEM ON YOUR STREET/STRIP OR EVEN FULL RACE LS? FULL DYNO RESULTS 11-20 PSI (10-16 ON THE SDINGLE TURBO). CHECK OUT THIS TEST RUN ON A CAMMED (BTR STAGE 2 TURBO) 4.8L LS. WE FIRST RAN THE MOTOR WITH A “SUPER RICHIE” COMPOUND (ATW INTERCOOLED) TURBO SYSTEM (T76 & S480), THEN WITH A SINGLE S475 TURBO. HOW EELL DID EACH SYSTEM PERFORM? IT’S ALL HERE.

Edd China's Workshop Diaries: Is The Mini Rally Build Finally Complete? Would You Buy A Drone You Can Sit In And Fly? Meet The Jetson One.