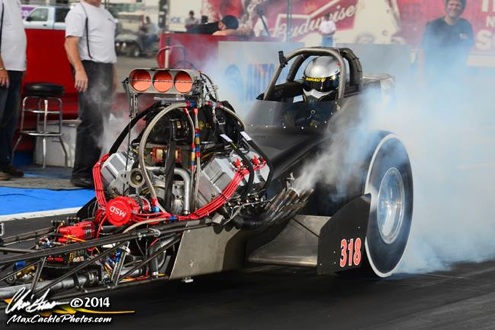 If there is one thing we always wished we could see at the Holley NHRA National Hot Rod Reunion it was a lights out Top Fuel show. The racing has always been great but this year promises to be titanic with a field the likes of which we have never seen in the decade plus history of this event. Murphy, Hirata, Bartone, Lechtenberg, Kumre, and on and on. This is a field of heavy iron with some ready-built story lines already in progress. See, Tony Bartone cleaned everyone’s clock at the New England Hot Rod Reunion last year in the fall and then came out to the March Meet and knocked ’em all flat there. The west coast guys hate it. Bartone thrives on beating those guys and after scoring one on each coast, he’s got a chance to tie up the middle now and don’t think for a second he doesn’t want to throttle them all again.

Outside of all that noise, there’s Dave Hirata who is driving Dale Suhr’s Orange Crate dragster which is based in Iowa. He went on record in the press release below as calling rear engine dragsters “Sissy cars” and referred to front motor machines as “men cars”. As a guy who hits the NHRA top alcohol circuit with regularity that’ll sure be winning him some friends, eh?!

The long and short of it is that the weather is going to be perfect and the stoutest field of front engine dragsters that have ever competed at the Holley NHRA National Hot Rod Reunion is queued up and ready to do battle. Read the press release below and get all the info, including run times which will inform you of when the cars will be on the live broadcast we’ll be running!

AA/FD HQ, June 10, 2014—Exuberant, fresh-faced Dave Hirata is among the fearless AA/Fuel Dragster drivers converging from all points of America to battle at this week’s 12th Annual Holley National Hot Rod Reunion in Bowling Green, Kentucky for an 8-car showdown between the always gnarsome and unpredictable front-engine Top Fuel class.

As the new driver of Dale Suhr’s stealthy but beastly “Orange Crate” Top Fuel dragster out of Waterloo, Iowa, Hirata insists that this Hot Rod Reunion is not just a fight for control over the competition, but a contest of wills between the driver and the race car itself.

“Things are slowing down and I’m getting more comfortable,” Hirata said about his return to driving front-engine machines, after an anxious outing at the season-opening Bakersfield March Meet.

“Rear-engine cars are sissy cars,” Hirata said, when asked to contrast the “Orange Crate” with the rear-engined A/Fuel dragster that Hirata races in competition in NHRA’s Top Alcohol Dragster class. “Front-engine dragsters are men cars. I’m getting more used to the front-engine dragsters, which are a riot to drive.  You never know what will happen.  The sensation of everything is magnified because of the vision… there is none!”

This shoot-’em-up will be the second of six NHRA Heritage Series events in 2014 to feature the AA/Fuel Dragsters. Indiana-based Hirata is among a number of Midwest-based Top Fuel racers descending upon Bowling Green’s Beech Bend Raceway. Nitro racers are also coming from both coasts. Among the most-feared combatants is the “Bartone Bros.” entry out of Long Island City, who will carom to Kentucky after setting California on its ear two months ago at the Bakersfield March Meet. At that event, driver Tony Bartone trampled the competition, setting Top Speed of the Meet (262-mph), Low ET (5.62 seconds) while taking the event title.

Among Bartone’s adversaries who want to show Bartone the way back to the Statue of Liberty is the Northern California-based “WW2” entry of Jim Murphy, who took Top Fuel at Bowling Green last year en route to winning the 2013 Heritage Series Championship.

This weekend in Kentucky, Bartone wants to continue his domination. Murphy wants to repeat. And Hirata is here to show the rest of the class that he knows the quickest route to Top Fuel Eliminator is a straight line. -30–

The Top Fuel Schedule for the 12th Annual Holley National Hot Rod Reunion is as follows:

Carnage Photos To The Extreme: A 727 ClutchFlite Transmission That Explodes EVERYTHING! LS Power Improvements: How The Wally's World GTO Got A Bunch More Ponies