The Song Of Our People: Listen To This Big Block Chevy Scream Out Nearly 9,000 RPM On The Dyno 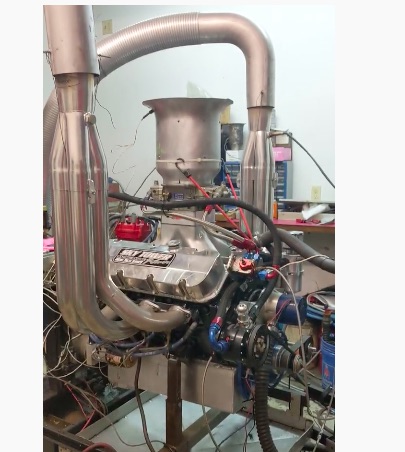 No, this video does not contain power numbers. It does contain the beautiful noise of a big block Chevy roaring up to 9,000 RPM on the dyno while wearing a set of vertical exhaust stack style headers. We’re going out on a short limb here and proclaiming this a pulling truck engine. Not just because of the headers but because of the massive RPM. While the diesel trucks snatch lots of the headlines in the pulling world these days, the gas engines used in two wheel drive and four wheel drive trucks are among the most gnarly in motorsports. Why? They are largely naturally aspirated which means that they make their power by turning incredible RPM while trying to drag the sled down the course.

This engine spins from about 6,000 RPM on up while attached to the dyno so that gives us an idea of its power band, right? If you have ever watched a real truck pull, you know that the drivers will kind of hit the throttle to set the truck in motion and then roll into the throttle, building wheel speed and hopefully momentum to help them when the weight box makes it all the way to the front of the sled. In effect, these guys are kind of racing the sled a little bit and trying to modulate the throttle as best they can to get some bite and get the load moving as quickly as possible.

There are few things more awesome in motorsports than a pulling truck on a perfect style hook. The four wheel drives especially because they don’t pull the nose at all. When one of those trucks is on the deck, screaming at full throttle, all four tires clawing at the Earth it really is something else.

Rough Start: 1975 Pontiac Astre - Not The Prettiest But It Makes A Case For Itself! Morning Symphony: NASCAR On The Strip With This R5P7-Powered Dart!

5 thoughts on “The Song Of Our People: Listen To This Big Block Chevy Scream Out Nearly 9,000 RPM On The Dyno”