This Classic Toyota Celica Is Powered By A Turbocharged Lexus V8 And It Cooks! 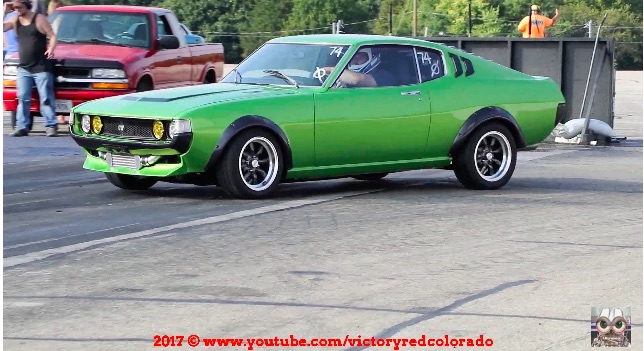 Older Japanese cars are pretty cool. Styling wise, it seems like Japanese designers liked what they saw during the muscle car era in America and applied some of the themes and attitude to their cars in a scaled down fashion. Take this classic Celica for example. If you look at the roofline of the thing it has a lot of fastback Mustang in it. If you look at the hood of the car and the power bulge that it has you can see a little Olds in it. The front end shape has some strong similarities with the fuselage era Mopars that showed up after 1971 or at least we think so. The cars were certainly not all that fast back in the day but they had a neat look.

When you take that neat look and add horsepower to it, things really start to get fun and that is exactly what the owner of this Toyota did. Rather than stick an LS engine in it and call it a day, the owner opted to used a 4.0L V8 out of a Lexus and he’s added mild amounts of boost to really wake the thing up. Long story short, he’s got himself a very streetable and unique 11-second car that can lay out more “muscle car” looking stuff at the drags than you would believe.

The car may not be everyone’s cup of tea but we think it is great, creative, and different. The 4.0L Lexus engine has the ability to swallow a lot more boost than it is taking now, so we’ll be interested to see if there’s a point when the owner decides to really stand on it. For now, 11s doing it his own way is perfect and we like where this dude’s head is at.

John Force Burns Down His Funny Car Like The Old Days, And That's Not A Good Thing! This Video From The 1970 Can-Am Race At Road Atlanta Is Amazing - See The Chaparral Sucker Car In Action!

5 thoughts on “This Classic Toyota Celica Is Powered By A Turbocharged Lexus V8 And It Cooks!”