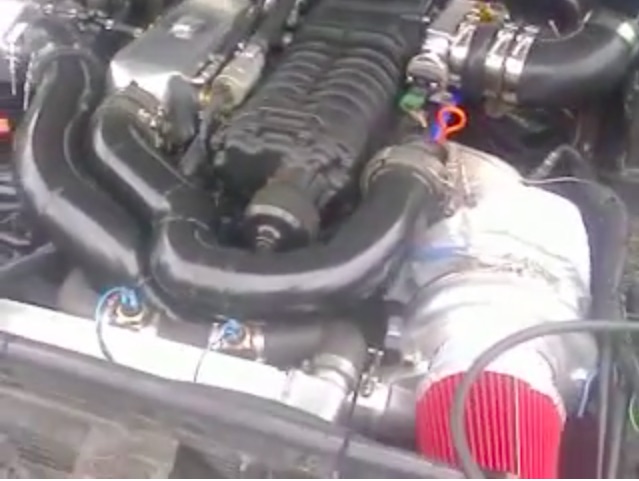 Trust us, there’s an engine under there. BangShifter Kyle Tibbs tipped us off to this video which we think was shot in Germany depicting an insane induction setup that is mounted to a 225ci Chrysler slant six. The engine uses a Garrett GT45 turbocharger which force feeds an Eaton M122 blower to make what has to be a pretty sporty amount of boost! The plumbing and stuff is all pretty radical looking and this is definitely not someone’s bodged together weekend project.

A LOT of work went into constructing this induction setup and packaging it into the engine bay. Hell, just think about mountain the blower alone and then think about then having to fabricate all the turbocharger plumbing around the inlet to the engine’s iron lung! We’re taking a wild shot in the dark here that the engine is fueled by EFI, for obvious reasons.

Things get kind of weird when the camera moves by the passenger compartment because the whole thing is done in faux leopard print. Like a LOT or fix leopard print, an amount even the gaudiest person in Las Vegas may balk at, frankly. The payoff is what’s going on behind the rear bumper at the exhaust outlet. The sound of this engine at idle is serious for sure.

That’s all we have on this car and engine combination. There’s a couple of other videos on the channel but they do not show anything of interest other that the thing being pulled out of an insanely crowded shop.

Anyone know anything else?!

Press play below to see this blown and turbocharged slant six run!

Classic YouTube: The 1965 12 Hours of Sebring - Racing While Flooded! Gravelrama 49: Elimination Hill - Eyes To The Sky And Foot To The Floor!

One thought on “Video: This Compound Boosted Slant Six Plymouth Valiant Is One Mean Sounding Freak!”