The Rookie: A Conversation With Nitro Funny Car Racer Alex Miladinovich – How To Race A Funny Car On A Regular Guy Budget 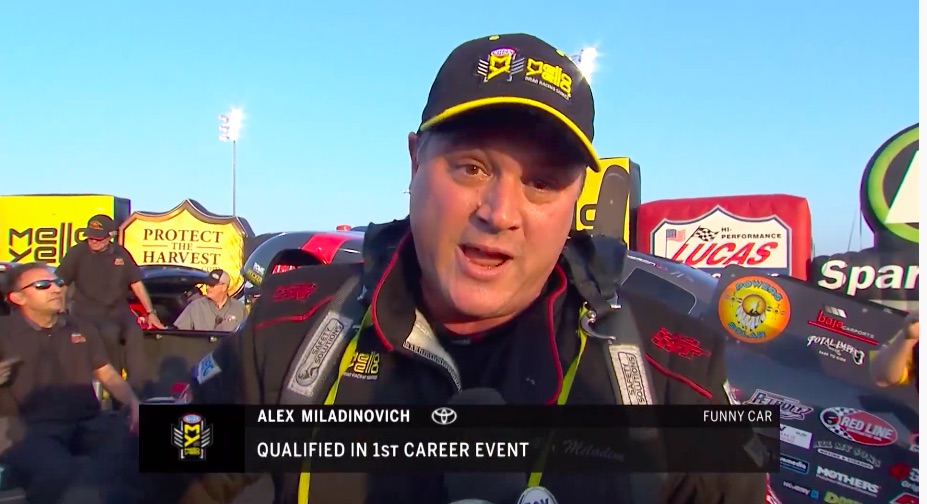 There are always feel good stories in drag racing and most of them center around people who race with a lot of heart and soul. At the 2020 NHRA Winternationals, the drag racing world got to meet Alex Miladinovich. This California racer had been steadily working his way up through the ranks competing in cars like nostalgia nitro funny cars and other machines before being able to make the leap into the proverbial “big show”. The neatest part of the Winternationals was when Miladinovich qualified at the event and was so emotional about the accomplishment. It was the first race they had attended with the car and to make the field (one with a bump spot) was a huge accomplishment.

Recently I had the chance to chat with Alex about his plans for the rest of 2020, how things were going with his operation, and how they had repaired a body that got dinged up during his licensing process. This is a regular guy. He works at the port. His wife is a teacher. His brother is their engine builder and does the motors in his garage. It’s regular guy fuel racing at 300+ mph.

If you think drag racing lacks heart and soul at its highest level you have clearly never met this guy. He rules.

3 thoughts on “The Rookie: A Conversation With Nitro Funny Car Racer Alex Miladinovich – How To Race A Funny Car On A Regular Guy Budget”