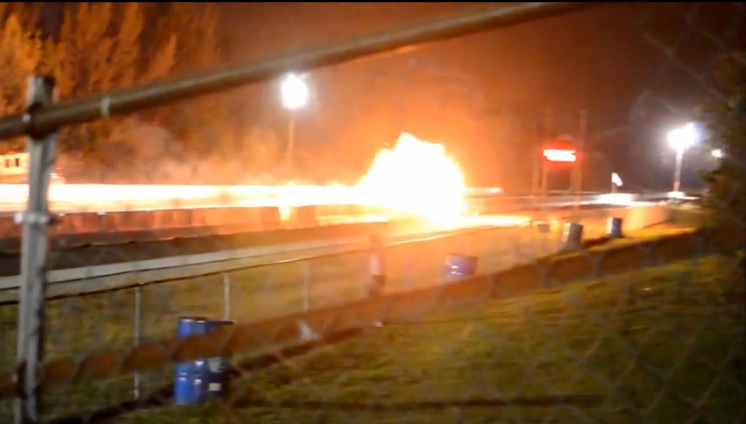 Lots of racers out there use front mounted fuel cells in their cars. The small cells can hold a few gallons of fuel, eliminate the weight of a tank in the rear and they also allow for better fuel deliver in some cases where the pump isn’t trying to “push” fuel in the wrong direction from back to front when a drag car is launching. The downsides of having a fuel tank under your hood in the nose of the car is that when you hit something, it could break and you look like you are starring in a Jerry Bruckheimer movie….as the driver of the Mustang in this video found out. The Fox-bodied car looks and sounds like a pretty serious piece. There is a parachute hanging off the back and the hood is a violation game inducing “scoop on a scoop” setup that suggests there is a whole lot of intake manifold under there.

As the car launches off the starting line you see the driver having to immediately start sawing at the wheel to keep the car going where he wants it. Ultimately he loses the handle on the car at about the 330′ mark and it noses into the wall. Under normal circumstances, the car would bounce off the barriers and sit there in the middle of the track. This time, as soon as impact is made the fuel cell breaks open (we think) and there’s an immediate ball of fire and mushroom cloud. This is a real deal ball of fire, too. We’re thinking that the saw the sun rise twice in downtown Miami when this happened!

The fire rages on and finally the driver walks around the rear of the car and he can be seen. The track crew gets after the fire with extinguishers and knock it down decently quick. The closing shot of the video is the poor car with a melted face being towed up the track by a wrecker. Chassis-wise the damage didn’t look too awful, but the fire turned the nose of the car into droopy dog. Lots of work to get that situation fixed!

PRESS PLAY BELOW TO SEE THE INCREDIBLE EXPLODING MUSTANG!