Gene Fulton Built A Killer Old School Gasser And This Is Video Of His First Time Out With It – Jamming Gears And All! 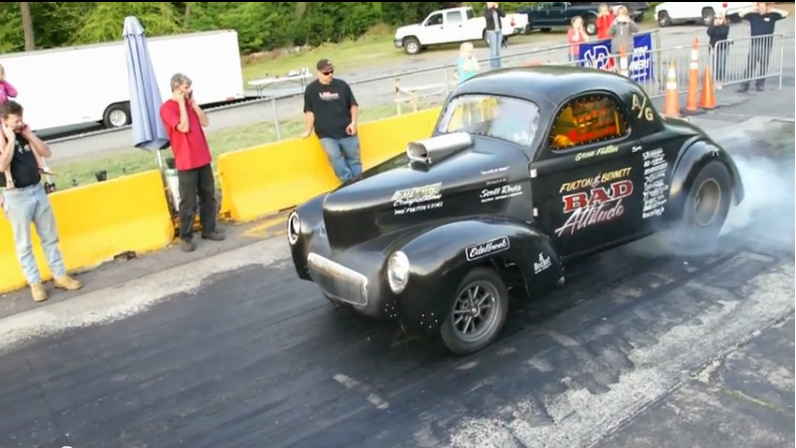 Gene Fulton is one of the great names in door slammer drag racing history. His engines has powered some of the most fearsome drag race cars of all time and Fulton was a multi-time national champion racer himself in his younger years. Proving that the drag racing virus never really leaves your system, Fulton has built a (sort of) retro gasser that has a hardcore Dart based small block topped with eight, count ’em eight, Stromberg carbs! This thing has a four speed and a bad attitude (as the name rightly suggests) like old gassers did. The thing leaves VERY hard and you’ll see runs filmed from multiple angles. The in-car video of Fulton stabbing, steering, shifting, and wrangling the car down the eighth mile is awesome, as are the words he gives to the camera at the end which basically translate to, “HOLY CRAP this thing is an animal!”

The plan was to have the car painted up all nice and pretty but the more that Fulton looked at it and considered it, the decision was made to leave the body as kind of hammered looking and then letter the body up in a retro-style. There are modern companies names slathered on there but since the whole thing is hand lettered in an old style, it all works great. In the video you’ll see the car making runs, you’ll get a look at the wild induction setup on the engine, and you’ll also see a bunch of “fun fact” thought bubbles that pop up to give neat info on Fulton, the car, and the scene in general.

It is really cool to see Gene Fulton on the track again slamming the gears in a car that he built and provided the power for. We’re not sure where Fulton plans to run the car as we don’t know if it fits the specific rules that Quain Stott maintains for his gasser series, but wherever it is, people will be loving it. It winds high, has a stick in it, and looks like it came out of a barn yesterday. We bet people will literally freak when they see the engine with the nose pulled up. So cool!

We're Pretty Sure Crashing A Lamborghini Is The Biggest Possible Fail For A Valet (Video) Project Violent Valiant Update: The Firewall Gets Fabricated, The Dash Shapes Up, And Some Steering Shaft Surgery

9 thoughts on “Gene Fulton Built A Killer Old School Gasser And This Is Video Of His First Time Out With It – Jamming Gears And All!”