Half A Hairy Hemi Video: Watch The Steinegger and Eshenbaugh F/Fuel Lakester Haul On Nitro With A One Headed Hemi! 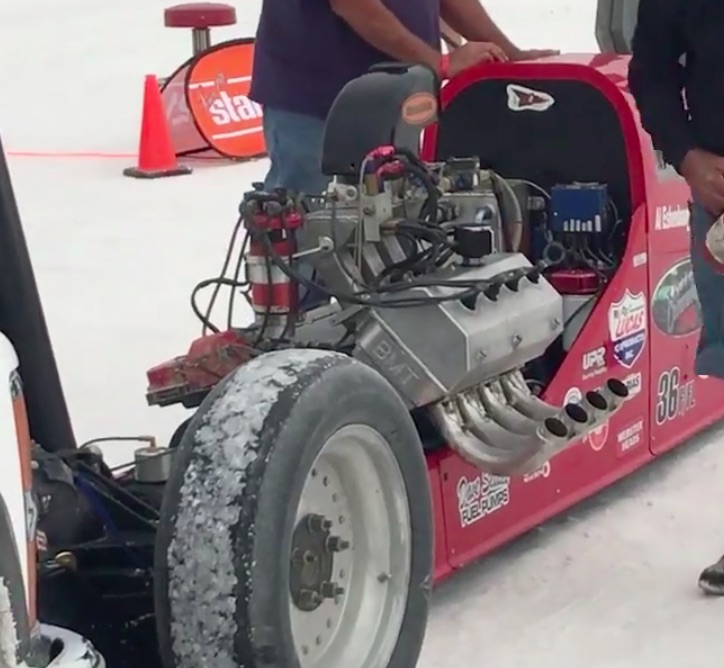 I’m not much of a hunter but I know guys that are. They tell stories about times where they have come close to bagging a trophy but missed it by that much. Timing is everything, even at Bonneville and the video below is proof. Before you go ahead and jump down there to see what I’m talking about. I had seen the F/Fuel Lakester of Al Eshenbaugh and Jamie Steinegger before but it had only been in the pits or in the staging lanes. I had never so much as heard it run. Why is that a big deal? The engine is freaking magical, that’s why.

The car has an early hemi V8 block in it like many cars on the salt. The engine runs on a strong load of nitromethane like many on the salt. The big difference here is the fact that this car uses one cylinder head and runs as a four cylinder. Where the other cylinder head would be sits a steel plate bolted to the deck of the block. There’s a sheetmetal intake manifold that looks bizarre with only four runners coming out of it. The plenum looks like it is just kind of floating there. To add to the freakish nature of this whole thing, the guys have spun four plugs into the steel plate on the “dead” side of the block. Why? Who knows but it looks awesome and it probably made it easier to get the eight cylinder style magneto sorted out.

Al Eshenbaugh and Jamie Steinegger have raced together since 1958. Back then they got together and built a dragster. In the early 1960s they were one of the most stout teams in the Southwest. A few years ago they found and restored their last 1960s era dragster and the car is one of the first nine “cackle cars” ever. These guys are awesome and this lakester has been well over 200mph at El Mirage and while we do not know what the top speed it has ever achieved it, we think they whole thing is just beyond words awesome.

Oh…last year the head was on the other side of the block until they blew it up and wrecked that side. No bother, they swapped the head to the other side and came back swimming in 2017. This is truly the spirit of land speed racing captured on a short video.

Press play below to see the half a hairy hemi in action! This is amazing stuff –

12 thoughts on “Half A Hairy Hemi Video: Watch The Steinegger and Eshenbaugh F/Fuel Lakester Haul On Nitro With A One Headed Hemi!”