From The Inside Out: This Look Into How TJ Zizzo Made His First NHRA Top Fuel Final Round Is Awesome 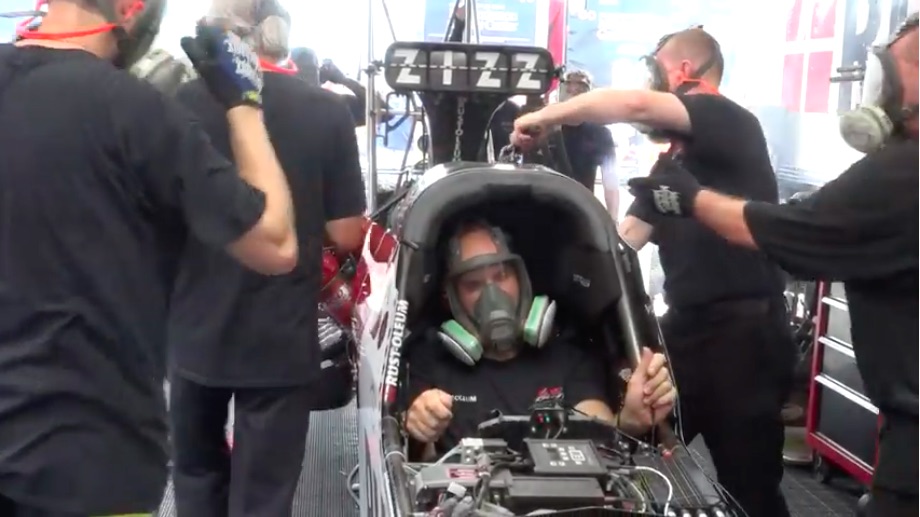 He is one of the “good guys” in the world of top fuel drag racing and he now stands on the precipice of doing something he has dreamed about his entire life. TJ Zizzo has finally made a final round at an NHRA national event in top fuel and as long as he’s waited, the irony is that he’s going to have to wait some more. Why? Because minutes after he made the final, rain enveloped Lucas Oil Raceway Indianapolis and doused the chances of finishing the race on Sunday afternoon. He and Justin Ashley will run for the money and the Wally at the US Nationals on the first weekend of September. Ugh, right? Not so much for Zizzo who always maintains a positive outlook and attitude. Hell, the guy has waited this long, what’s a few more weeks?!

The neatest thing about the Rust-Oleum sponsored top fuel dragster is the fact that it runs limited events every year, it has a crew that’s wrenched together for (in some cases) decades, and Rahn Tobler provides a little direction on tune up direction with the final calls being made by Mike Kern. It’s a fantastic looking, performing, and thundering race car that we’ve all watched turn on a ton of win lights pound for pound in top fuel. Heck, they went to the semi-finals at the 50th Gatornationals last year and that was just one indication of how good these guys are.

This video is a look inside the Sunday of TJ Zizzo. A Sunday that’s sitting in neutral for few more weeks before he gets his shot at Justin Ashley in the delayed finals.

Foose Does The XJ: Check Out This Cool Video As Chip Foose Sketches Up His Own Personal Dream Jeep High Roller: The 1981 Rolls-Royce Corniche Coupé That Ran The Paris-Dakar

3 thoughts on “From The Inside Out: This Look Into How TJ Zizzo Made His First NHRA Top Fuel Final Round Is Awesome”