In-Car Video: Watch Larry Larson Spin His Truck Out On Purpose After The ‘Chutes Get Tangled In Australia 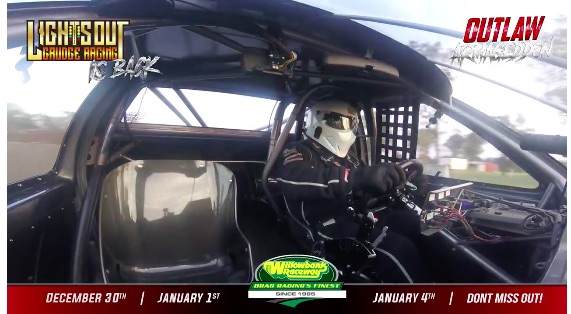 As many of you may or may not know, Larry Larson is currently in Australia racing his truck and his iconic Nova as part of a weeks long stint at Willowbank Raceway. The transmission in the truck is currently being repaired so Larson is taking on all comers in the faithful Nova that he’s had for a few years now. Before the transmission issues, Larson had one wild ride in the truck! He knows the truck as well as anything he’s ever driven and his experience and familiarity come into play front and center during this video.

What we are going to see is Larson blast down the track and then pull the parachute handle. The parachutes deploy but then get tangled up, resulting in the S10 chewing up shut down area real estate in a quick fashion. Willowbank is not a short track but that car is beefy and the brakes were doing all they could do to haul Larry down. As you will see and hear Larson was working the brakes and then the truck began to hop, forcing him to come off the pedal and settle it down.

Despite the fact that the truck was rapidly slowing, Larry saw the sand coming and he did not want to put the car into it. His solution? Turn the wheel, whack the brakes, and spin the car out! He did it perfectly with the rear tire basically grazing the trap and the nose staying completely out of it. This is a great video of a driver reacting under pressure!

The best part of the whole video is the end when the in-car camera captures Larry pulling off his helmet and talking to his guys, explaining what happened and what he did to prevent a dirty mess. We’re not sure how many guys are capable of making this move as smoothly as Larry did but we know the fans at Willowbank got their money’s worth when they watched this!

12 thoughts on “In-Car Video: Watch Larry Larson Spin His Truck Out On Purpose After The ‘Chutes Get Tangled In Australia”