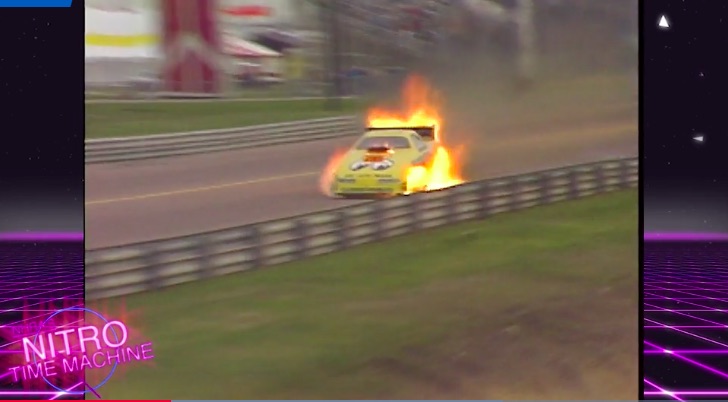 There are certain truth in drag racing that are absolute. The first one to the finish line wins in a heads up race, header flames are awesome, and if you race a nitro funny car your ass is going to be on fire at come point. The first time that this happens to a driver is a traumatic experience. The second through 100th time it happens is bad but not as bad as the first big inferno, at least that’s what the professionals tell us. Japanese racer Kenji Okazaki came to the USA in the early 1990s to apply his skills to nitro funny car racing and as it turns out, the guy was awesome. He’d become a national event winner and he competed strongly with big Jim Dunn for years. This day in Houston was not one of the man’s finest hours though. It didn’t have much to do with him as much as it did the car, but holy smoke this is bad.

This Nitro Time Machine is fun because we see the raw footage of the fire and wreck from a few angles, we see the top end interviews in the raw not conducted by Steve Evans but rather NHRA producer Tom Gee who was an instrumental part of making the shows back then. He’s the voice you hear talking to Kenji and Dunn.

Dunn’s interview is pretty awesome. He said that Kenji learned why you have to lift when an engine lays over down track and he learned what the whole fire situation was like that followed the ailing engine. He was smiling when he said it!

Hit the image below to watch this wild video from Houston 1993 – massive fire! 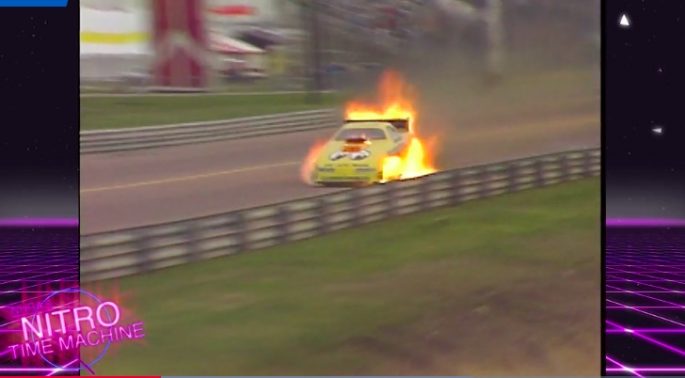 The Beater Dream: Chasing Sports Cars On A Race Track In A Worn-Out Four-Door Nova Money No Object: You Can Now Buy A Brand-New Escort Mk2, If You Have The Coin!