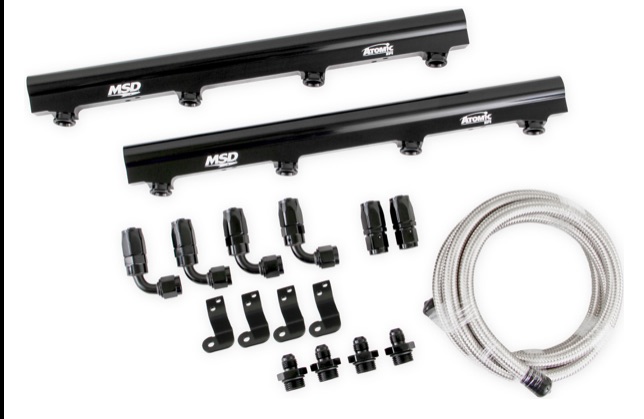 MSD has released a couple of cool new products, especially or those of you messing with LS and LT style GM V8 engines. For starters there are the new Atomic billet fuel rails for MSD AirForce manifolds. You can get those two ways. For starters, just the rails or if you want the whole program you can order them with all the brackets, hoses, and other materials you need to properly install them onto your engine. Incidentally, these rails use a 5/8ths fuel passage to move enough juice to feed even higher horsepower applications.

The company has also released a couple of new looks for their popular Atomic AirForce intake manifold. The performance of the manifold is the same as previous models but the aesthetics are different. You can now have the intakes with black or gray logos. Sounds like a small thing but at the end of the day if you are going to invest in making your car perfect that includes performance AND looks, right? Options are good.

Here’s the word from our friends at Holley/MSD – Air and Fuel delivery!

Holley is pleased to announce the release of MSD Atomic Billet Fuel Rails for LS1/2/6, LS7, and LT1 engines. Developed specifically for MSD AirForce Manifolds, they’re available in two versions – just the fuel rails themselves or in comprehensive kits with the rails, fuel fittings, O-ring fittings, mounting brackets, and all the hardware to plumb the system. MSD Atomic Billet Fuel Rails feature a black-anodized/bright-dip finish with laser-etched logos that’ll look great for years and a 5/8-inch fuel passage with the flow capacity to fuel high-horsepower applications.

MSD Atomic Billet Fuel Rails are perfect for MSD Atomic AirForce Intake Manifolds, which just came out in new colors. You can now choose between new solid black or gray logos (in addition to the traditional red). They feature unique bell-mouthed runner entrances that maximize airflow and minimize shrouding, optimizing the available plenum volume for an unobstructed flow path over opposing runners. Atomic AirForce intakes have a huge 103mm throttle bore, a two-piece configuration that makes it easy to custom-pork the intake runners, and come complete with gaskets and all the hardware for a direct bolt-on installation.

Awesome Video: The Worst NASCAR Race Ever - Here's The Story Of The 1969 Talladega 500 2019 ALS Cruisin' For A Cure Car Show Gallery: More Awesome Iron From This Fantastic Show