Near Disaster Video: Another Calamity From The Legal Street Race In Oklahoma – This Time A Repair Truck Causes Chaos 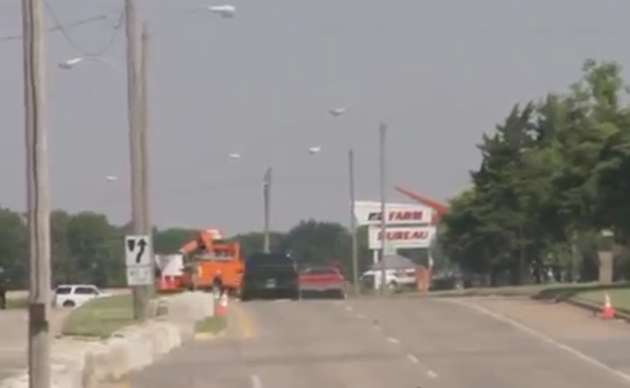 (By Jason Mazzotta) – We have already seen plenty of action from the crazy legal street race on Route 66 in El Reno, Oklahoma, including the near flattening of a crewman when two cars came together on their burnouts, and then the terrible wreck that saw a Corvette end up on its roof after taking down a telephone pole. Well this video is a near disaster that happened right after the road was put back together following the Corvette wreck.

When the ‘vette went off the end of the road and took out the telephone pole, a repair truck was called in to fix the damage and keep the event going. After the job was done the truck was leaving the accident area and getting out of the way but did exactly the opposite.

The next pair of cars were already on their way down the road, as the repair truck was unaware and turned right out onto the finish line as a Charger and Silverado were speeding right at it. As the Charger got there first it avoided the truck to the right. As the Charger passed the repair truck, the repairman started to turn back realizing he was on the wrong road, but turned right into the path of the Silverado speeding down the left lane.

All vehicles somehow made it out of this near disastrous situation, and the entertaining videos keep coming from this out of control event from Oklahoma.

Check out the near three car pile-up below:

12 thoughts on “Near Disaster Video: Another Calamity From The Legal Street Race In Oklahoma – This Time A Repair Truck Causes Chaos”