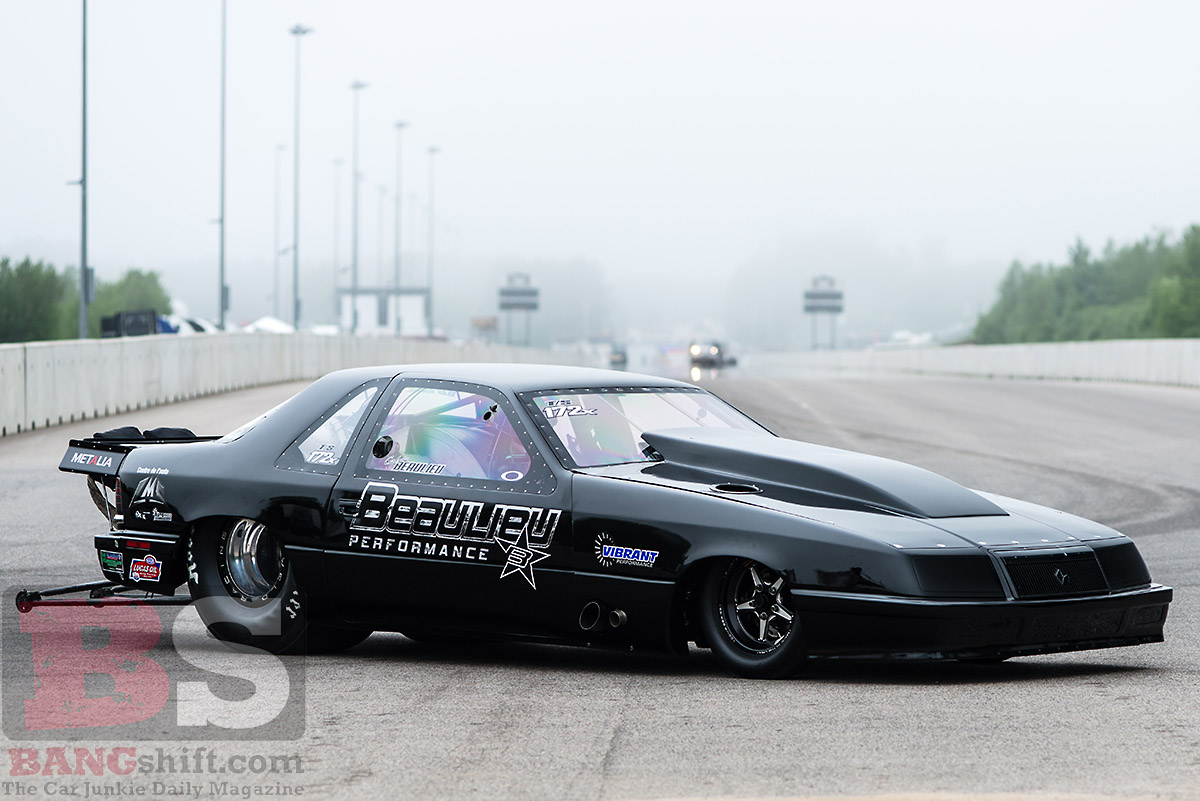 (Photos by Dave Nutting) – Not that it is easy these days but Canadian father and son duo Ghislian and Cedric Beaulieu have been drag racing with turbos since it was way harder than it is now. This car has been turbocharged for more than 10 years and through that time it has gone from a temperamental, unpredictable, unique rocket to an even faster, more consistent, top sportsman killer and we’ve been fortunate to have watched the evolution with our own eyes. See, Cedric and his dad are from the Quebec, Canada. His dad speaks only French and when we were hanging out with them drinking beer at the 2016 NHRA New England Nationals, we hatched a plot to shoot a feature on the car very early that next morning. Cedric was translating for us while giving all the relevant information on the car. But let’s not get ahead of ourselves or the history of what could be the coolest 1992 Chrysler LeBaron in drag racing history.

It was likely around a decade ago when we saw this car for the first time running IHRA Top Sportsman at the long defunct North American Nationals which used to be held at New England Dragway in Epping, New Hampshire. It was incredible for the simple fact that it was the fastest turbocharged thing we had ever seen to that point and it was one of the FEW turbocharged things we had ever seen to that point. 10 years ago the world was not populated with this stuff, especially when we found out that it was Mopar powered. Lots of guys hide Chevy motors under a unique body like the LeBaron but not the Beaulieu’s. This car is Chrysler from front to back and it is also theirs from front to back. Ghislian built the chassis himself and as you will figure out through the rest of the story, the guy can do everything on this car. Cedric has inherited his dad’s mechanical prowess as he wired the entire thing and is the tuner on the car as well as the driver after his dad gave up the seat.

We’re not talking behind their back when we say that this car was good for some real hero laps back in the day or shaking/spinning the tires with impunity. It put on one hell of a show but tuning the chassis and the engine with the turbos was bleeding edge stuff back then. The good news about those early trials and tribulations is that it lead to the awesome machine you see before you.

So let’s talk turkey for a minute. How fast is this thing? How about 6.40/226 mph. That gusto is coming from a 528ci, first edition B-1 headed Chrysler wedge engine that is based off of a Keith Black block. Inside that block the big arm swings Bill Miller pistons as well as Bill Miller connecting rods. The turbos are twin 88mm Garrett pieces that produce on the order of 35psi of boost and there’s a set of 94mm jobs that will find their way onto the engine soon enough. Why? If you just asked that please leave and don’t come back. Plumbing and clamps are from Vibrant performance and we think the whole package looks great. The engine is lubricated with Total Lubricants Racing Oil and Cedric reports that the engine loves the stuff and it has really helped them improve the longevity of bearings among other components in the engine as well.

Watch this run at a small strip in Canada – Cedric has his hands full!

Feeding the engine is a Holley Dominator EFI unit that’s controlling 160 lb/hr Holley injectors and a set of massive Moran 550 lb/hr jobs. Those injectors are plugged into an intake manifold that Cedric’s dad made himself. It has seen it’s fair share of battle and we dig the fact that it has some scars. Proof that this thing has had one hell of a “working” life. Backing the engine is a Coan built Powerglide packing one of their converters.

The rear end in the car is a 9″ style housing that they made themselves. Listen, we told you these guys were awesome so don’t be surprised! The ratio can vary from 4.10 to 4.30 depending on the track they are running at and the distance of the race as this car will run both eighth and quarter mile stuff. Suspension includes Penske shocks in the rear and Strange Engineering struts in the front. Wildwood Brakes are responsible for working with the parachute to stop the whole works from speeds in excess of 220mph.

Inside the cockpit one of our favorite features is the tinwork which, you guessed it, Ghislain did himself. The bead rolling work is awesome and it really finishes the thing off nicely. A Holley digital dash is used along with a couple of well placed water-filled AutoMeter gauges. It is a workman’s cockpit for sure.

Cedric and his dad run the car in lots of Top Sportsman events throughout eastern Canada and the New England area. They also compete in some region pro mod action with it as well. Over the years the car has gone from laying down sporadic massive numbers to being extremely consistent and blindingly fast to boot. This thing truly is a Northern Menace!

We’re going to tell the rest of the story with Dave Nutting’s killer photos! 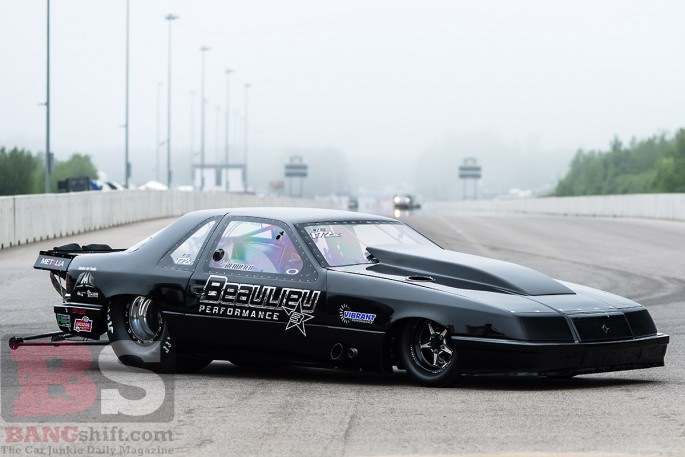 The car has had a couple of different looks over the years but this is our favorite. Talk about menace! This thing is just nasty in the best way possible. The body is a Hairy Glass pro stock piece. Not many of these kicking around anymore. 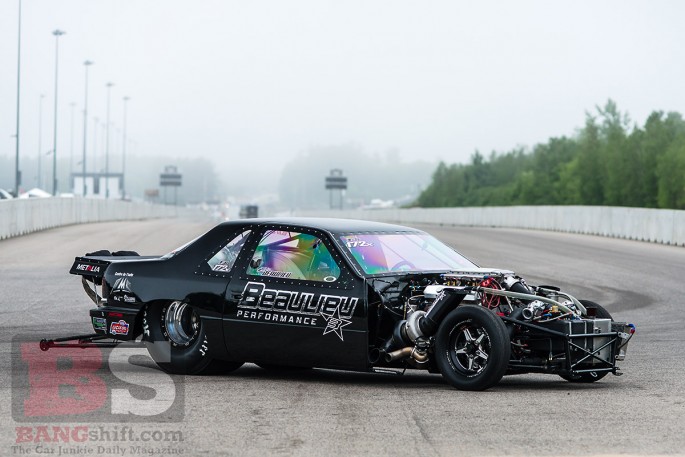 With the nose off the Billet Specialties Wheels are on full display as is the Keith Black based 528ci Mopar wedge engine. Oh, one of the “twins” is exposed as well. 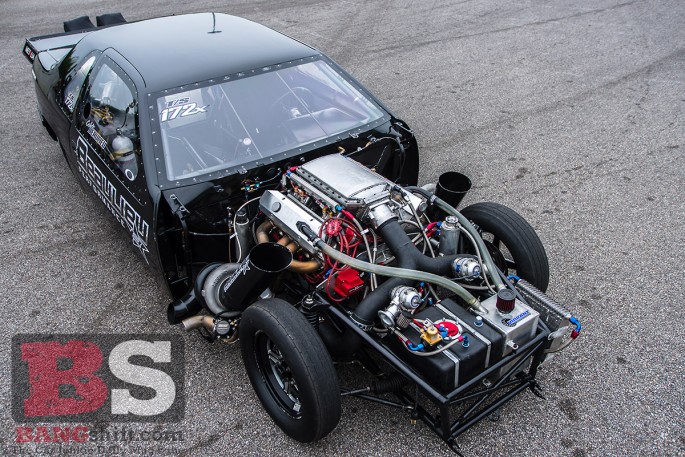 If this does not bring a single tear of joy down your cheek, you can go ahead and admit that golf is your favorite hobby. So awesome. 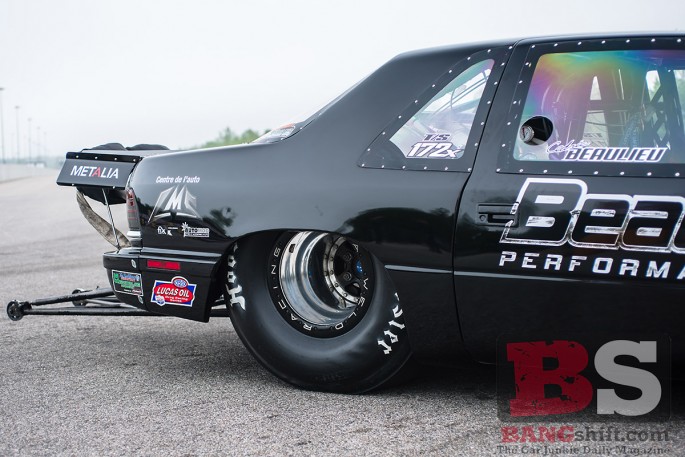 The Hoosier slicks get abused pretty hard in this car. The big tires make for exciting launches which normally include long, hanging wheelies. Fans eat this car up. In a category with lots of monster nitrous engines, turbos win their hearts. 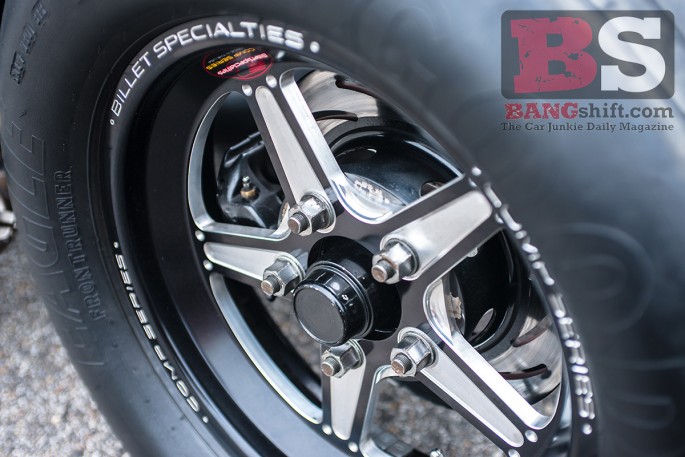 We like the looks of the Billet Specialties wheels backed by the Wilwood Brakes. Those binders get some work from 226mph to zero! 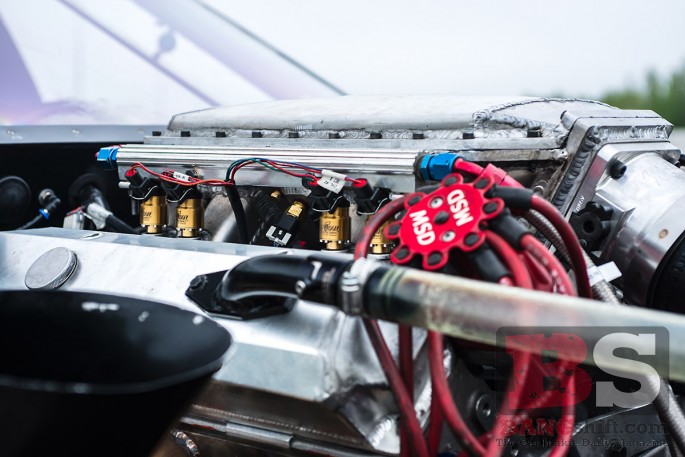 Cedric’s dad Ghislain built the chassis, the rear end housing, the intake manifold, etc. The guy is super talented, speaks not a lick of English, and we became fast pals over Canadian beer in Epping. 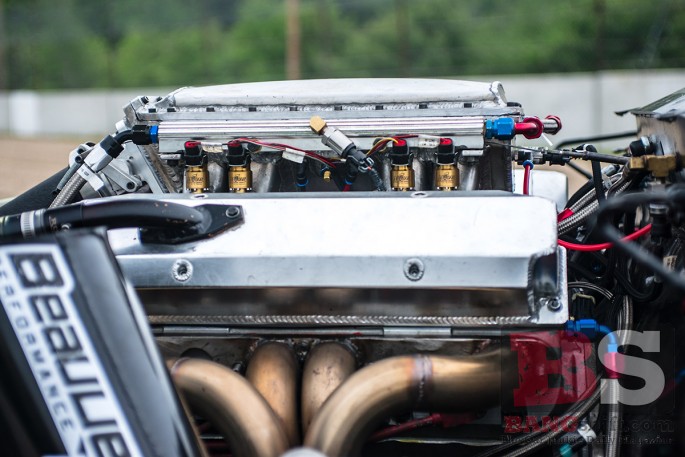 Oh, he also built the headers! Here you can see the Moran injectors as well as a coupe of the smaller Holley injectors as well. Lots of boost, lots of power, LOTS of fuel. Cedric tunes the engine on the car and wanted to thank Ryan Witte for all of his help and support over the years. 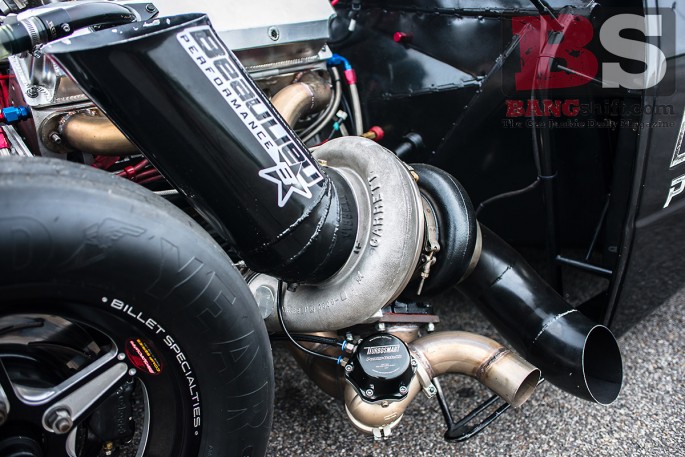 The turbos currently on the car are 88mm Garrett pieces. There are 94mm jobs on the shelf that will make the car even quicker and faster. This has to be one of the quickest and fastest full bodied wedge powered Mopars ever. 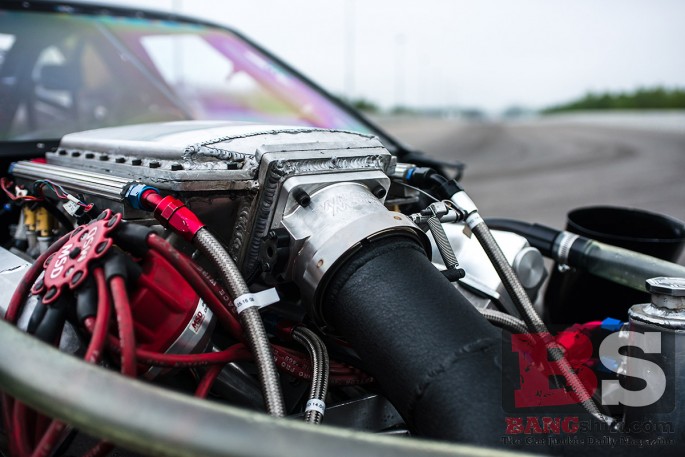 That intake manifold may have a couple of battle scars but it makes the whole thing cooler to us. Billet stuff is cool, pretty, and insanely expensive but the parts that racers literally craft themselves will always be tops in our book. 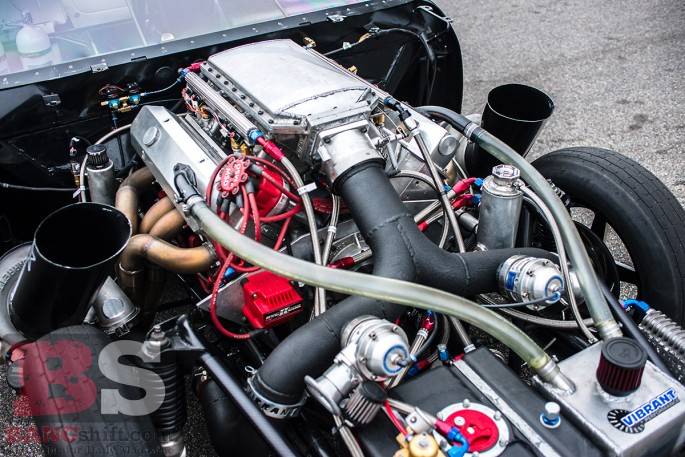 Here’s a good shot of all the plumbing that Vibrant Performance supplied. They also supplied the V-band clamps that are keeping this whole program together at 35psi. The engine is lubricated with Total Lubricants Racing Oil, which Cedric said has really helped their program. 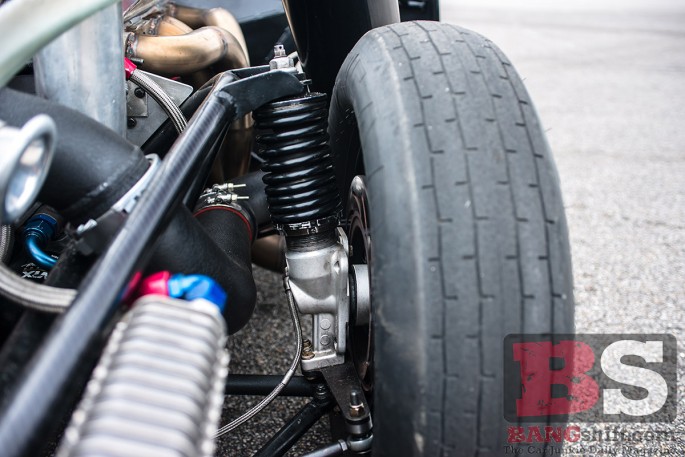 Over the years as technology has advanced and the car has gone quicker and faster, the chassis and suspension have been updated as well. Strange Engineering equipment now controls the front end of the car. 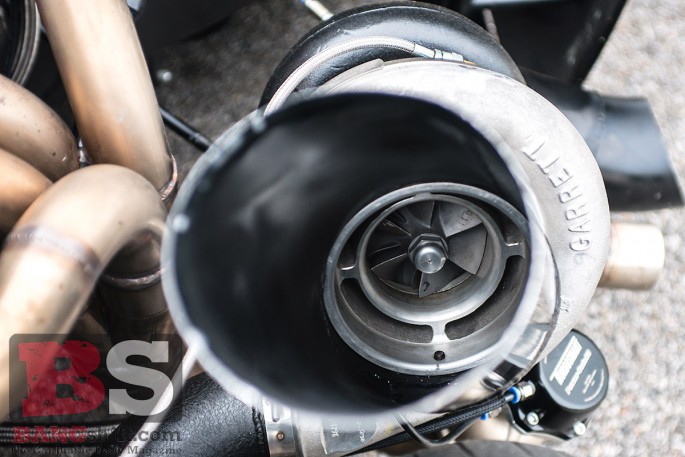 Firs the air enters at the top and then all the awesome happens. The Garretts can really gulp some air but a bump to 94mm chargers will really make this thing an animal. 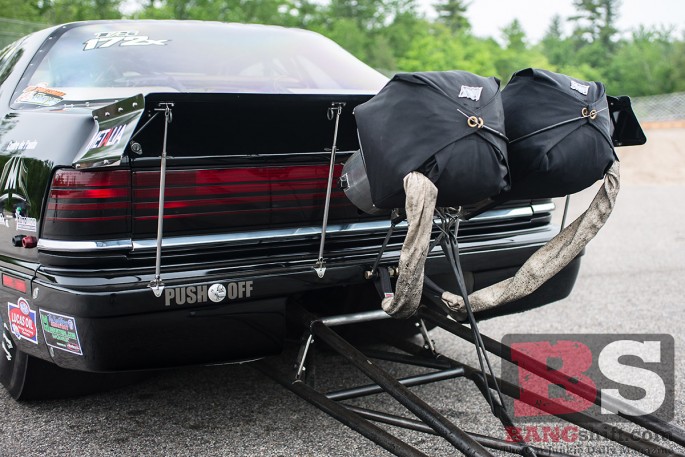 We dig the factory tail light assemblies being in place and we also dig the twin air brakes necessary to slow this monster down from 226mph quarter mile passes. 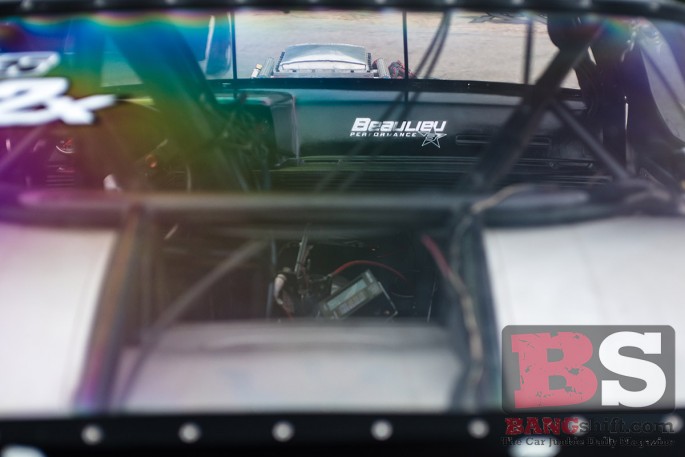 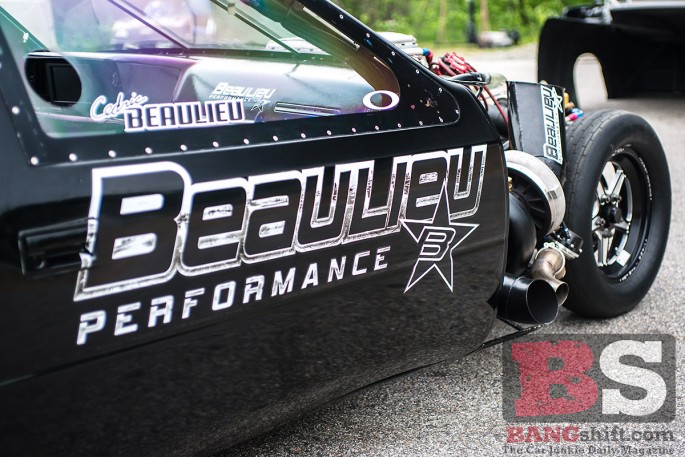 I had been pronouncing the family name wrong for a decade until Cedric taught me how to say it properly! Want to do it right? Bowlour is the phonetic way to make it happen. 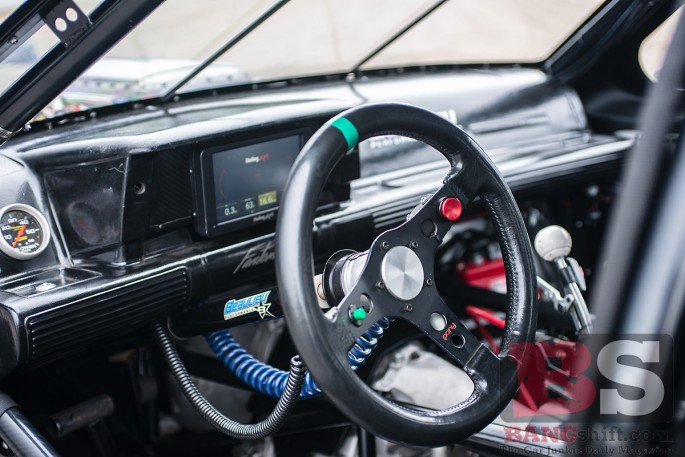 Here you can see some of the simple interior of the car. The Holley dash provides tons of information to Cedric and keeps things from looking like an airplane in there. 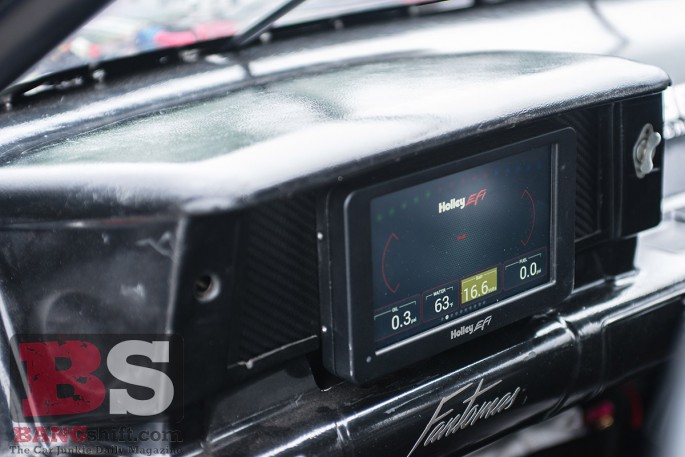 Being that this is a race car you can see the quick release fastener next to the dash for those times when the whole dash panel needs to come out. 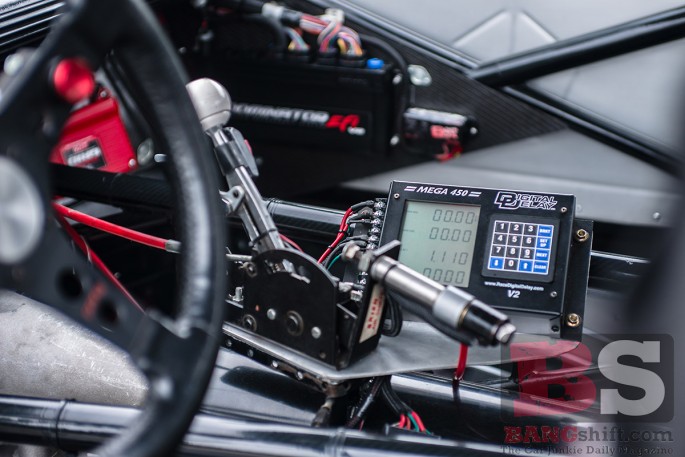 Yes, when running the car in Top Sportsman, Cedric has to plug some numbers into the delay box. This thing runs heads up with regional pro mods in Canada and on the box for NHRA division one competition. 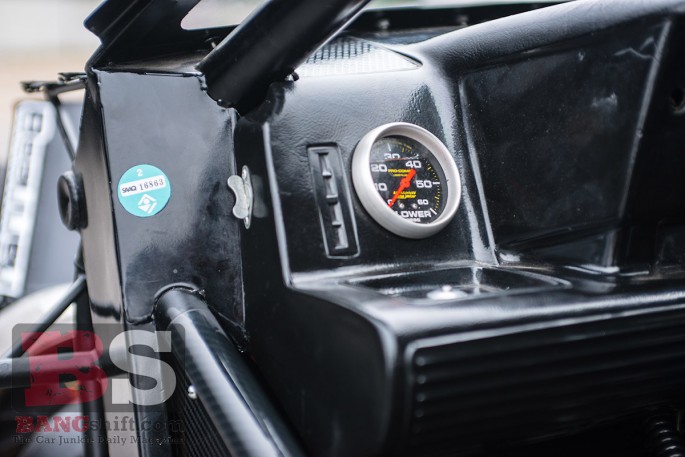 The one gauge traditional gauge in the car is this AutoMeter boost gauge that tells Cedric when the turbos are spooled and if they are working hard enough down the track. 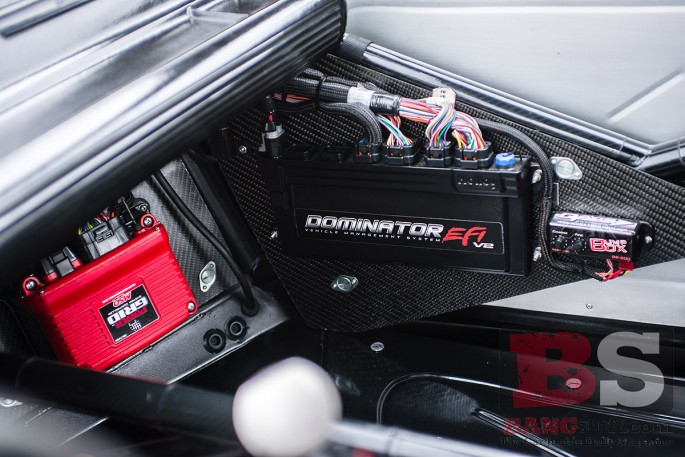 Quite literally the brains of the operation. From the Dominator EFI to the MSD PowerGrid, these controls have allowed a once seemingly untamable car to repeat and repeat! 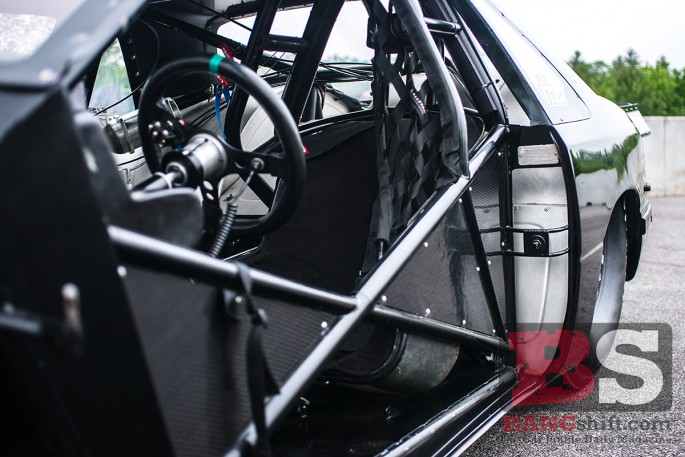 Cedric’s dad is an amazingly talented man, having built the car from scratch when Cedric was a kid. His chassis work is beautiful. 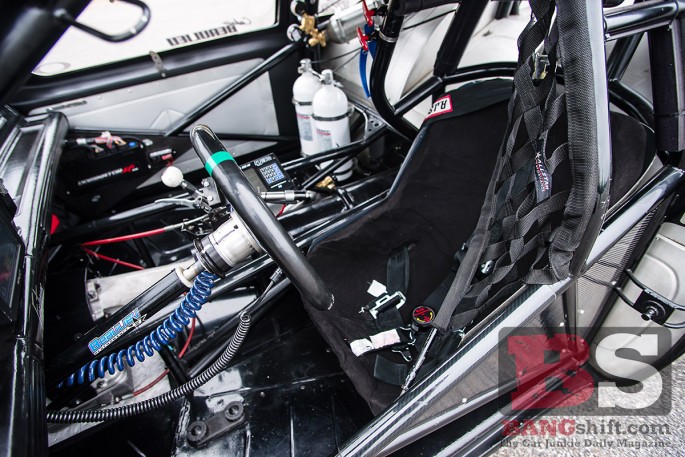 When you are sending your kid down a race track at 226mph you need to be confident in your work and Ghislain has every right to be. 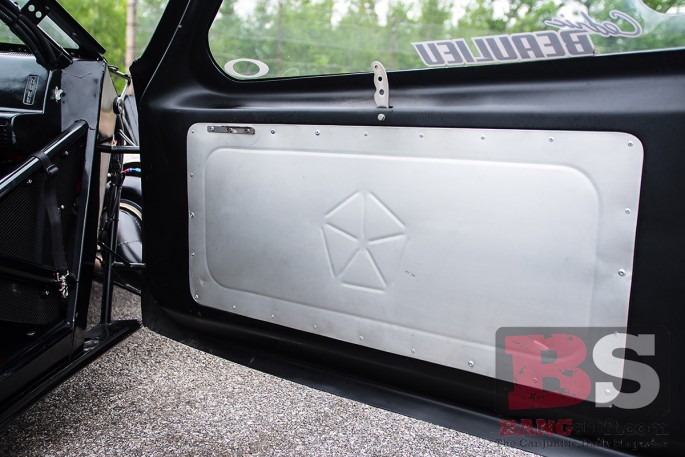 We LOVE the detail work that Ghislain put into the tin work inside the car. The Chrysler logos are awesome and not over the top. 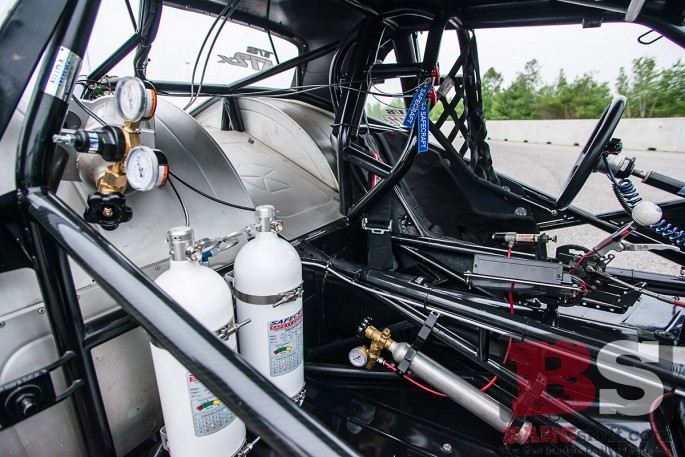 We love how everything is laid out, mounted, and again the Chrysler logo between the wheel tubs is a really nice finishing touch. 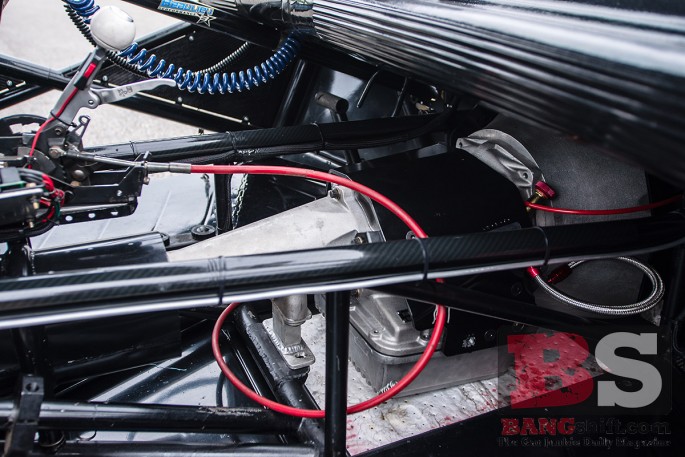 There’s the Coan Powerglide complete with a blow shield right over the top of it. That’s an extra measure of protection above and beyond the case which is an SFI piece. Kind of wild to have a trans right there, right? Pretty typical these days. 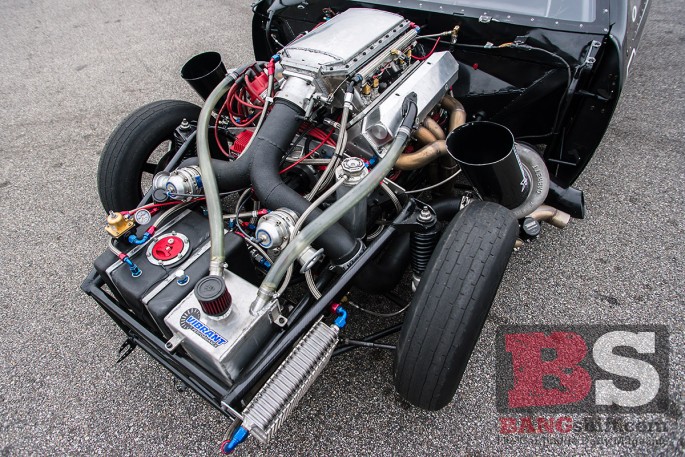 Cedric wanted to give special thanks to Total Racing Oil, Vibrant Performance, and Turbo Expert for their support of the car over the years. It is just cool beyond words!

Hidden History: This Olds Silhouette Minivan Has A Fascinating Link To The World Of Drag Racing Late Model Stomper: Salvatore Iovino's Dodge Charger Is A Monster!