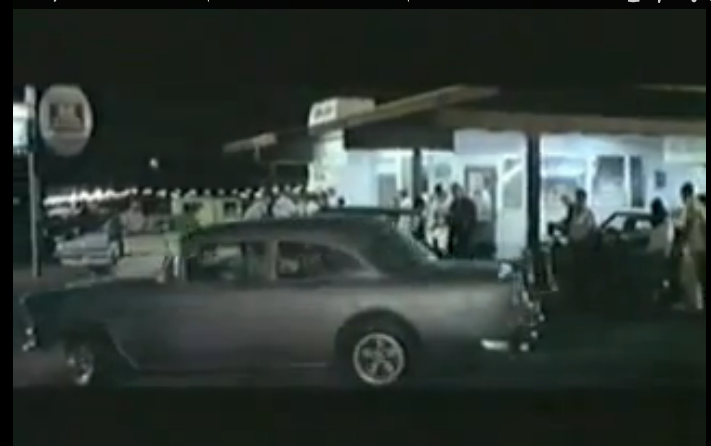 To the normal person Two Lane Blacktop is a horrendous movie but to gearheads it is an amazing cult classic. As you know we are gearheads and  because of this fact I thought that I’d try to dig up my favorite scene in the movie.  This is the part where Dennis Wilson and James Taylor scope out a drive in to find a candidate to street race for money. They happen upon a cool 1932 Chevrolet with a 427ci big block in it and decided to go in for the kill.

The exchange between Taylor and the owner of the ’32 is one of the coolest in car movie history. CAUTION – THERE IS SWEARING – AN “MF” GETS DROPPED HERE AND IF THAT OFFENDS YOU, YOUR PETS, KIDS, CO-WORKERS, OR CELL MATE DON’T WATCH.

When Taylor tells the guys that he’s not, “in the habit of seeing the Chevy work against a two bit piece of junk,” it makes the hair stand up on the back of my neck. The line is delivered so matter of fact that it is totally great and frankly is elevendy-thousand times better than some blustery yelling and screaming on the drag race TV shows currently out there. Then there’s the awesome “make it three yards mother-bleeper and we’ll have an automobile race,” line that is probably the best ever delivered in a car movie. The sounds of both big block cars being power shifted down the road is beyond compare.

PRESS PLAY BELOW TO SEE THE FAMOUS PRIMER ’55 FROM TWO LANE BLACKTOP WIPE THE ROAD WITH A BIG BLOCK Chevy Coupe!

Rough Start BOGO: 1979 Chevy Monza 2+2 And 1980 Monza Spyder BangShift Question Of The Day: What Has Been Stolen From You?