The Greatest Top Fuel Burnout Ever? Watch The Laganas Rip One So Long That They Have To Refuel BEFORE The Run! 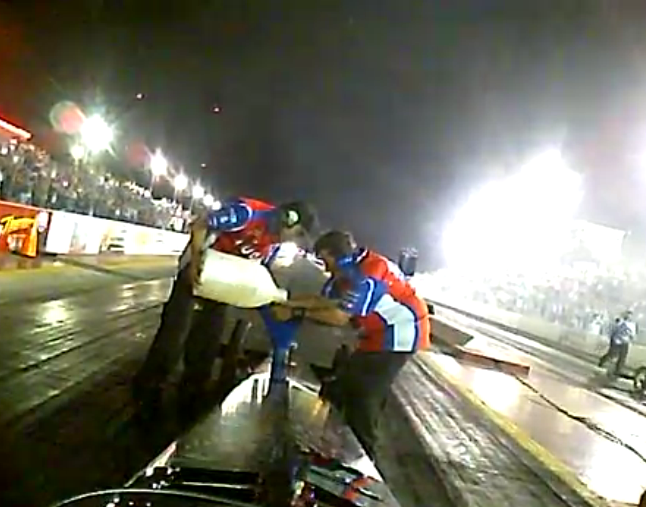 (By Jason Mazzotta) – It is safe to say the Lagana family will go down in drag racing history as the nitro team that had the most fun doing it their own way. Finding success in both IHRA and NHRA in both top fuel and nitro funny car, the family out of New York has always raced on a budget, as a family, and done some of the crazy things along the way. This video brings us back a few years when the team was still running IHRA full time and Bobby Sr. was still alive and calling the shots alongside Bobby Jr., and Dom was behind the wheel.

After firing up the nitro beast Dom rolls through the water and lays into the throttle, holding it down to almost the half-track blocks before lifting at 115 mph. After coming to a stop just before the quarter-mile stripe and backing up to the starting line, Bobby Jr. and Sr. come into the picture with some more nitro. After quickly getting the fuel cell open, they refuel the car with some nitro, as Bruce Litton is backing up from his burnout. After getting the car staged, Dom makes a clean pass to 1000 feet where he starts drifting out of the groove and has to give it up, where Litton just clips him at the stripe. Once again though, the Lagana’s put on a show for the fans having a blast, doing it their own way.

Check out another chapter of the Lagana legend below:

3 thoughts on “The Greatest Top Fuel Burnout Ever? Watch The Laganas Rip One So Long That They Have To Refuel BEFORE The Run!”