The War Horse: A 1966 Straight Axle Mustang Fast Back That Punches All The Right BangShift Buttons! 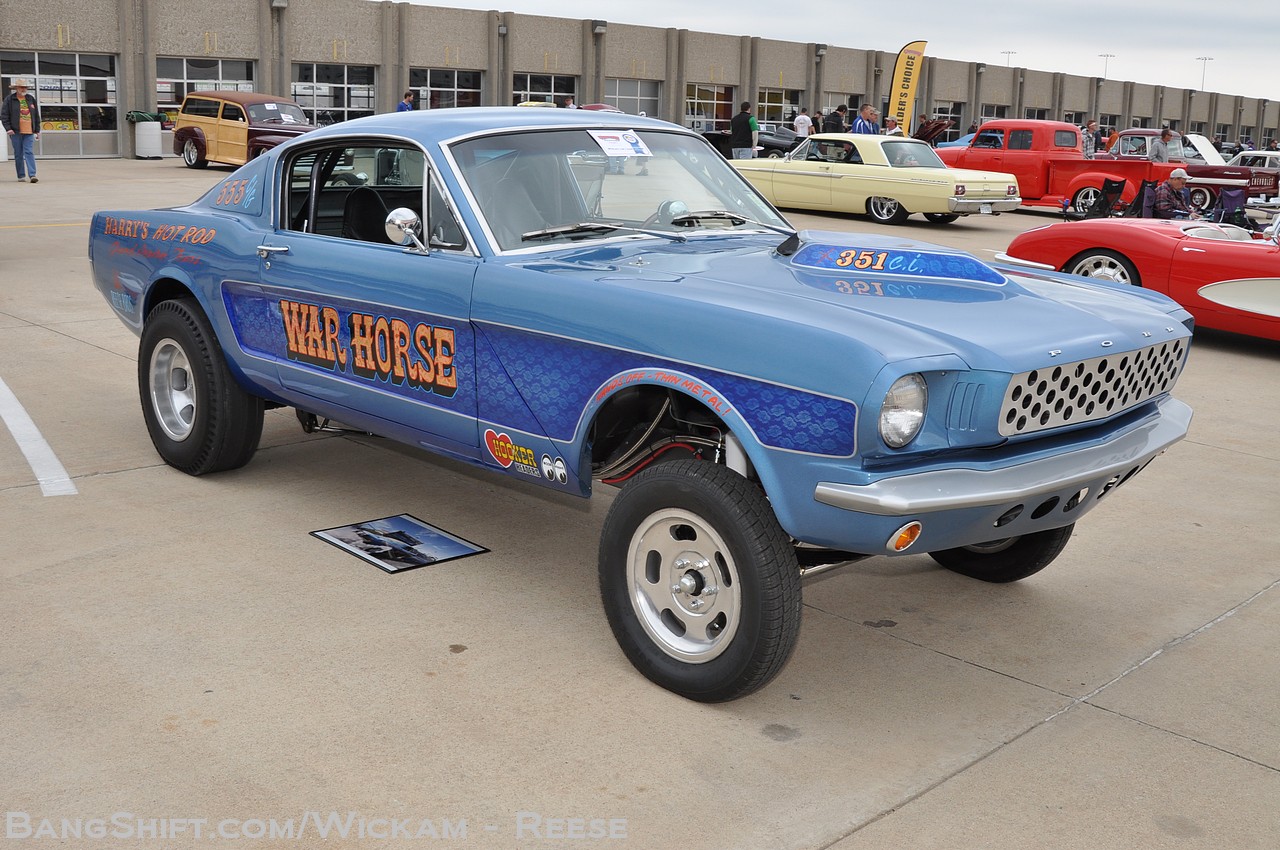 (Photos by Charles Wickam and David Reese) – When Charles called and asked if we would be interested in doing a feature on a totally kick ass 1966 Mustang fastback done in the gasser style that gets street driven, wins car shows, and also is drag raced, we told him HELL YES without having seen the car. Once we saw the photos we were instantly in love with one of the neatest home built cars we have seen in some time. David Reese owns the car and built it in his one car garage at home. This was no simple deal of putting some nice paint on a 1966 fastback and jamming a straight axle and 351 Cleveland into it. No way. Reese started with a totally clapped out 1966 Mustang Coupe, added the fastback shell, built the steel tilt nose, did the cage himself, did the front axle himself, and the dude now plans to drive it from Texas to Kentucky for the Holley NHRA National Hot Rod Reunion this June! We love this guy!

WE’RE GOING TO TELL YOU THE STORY OF THE WAR HORSE MUSTANG THROUGH PHOTOS AND CAPTIONS BELOW! SCROLL DOWN TO SEE THE BUILD AND THE ABSOLUTELY BITCHIN’ FINISHED PRODUCT! 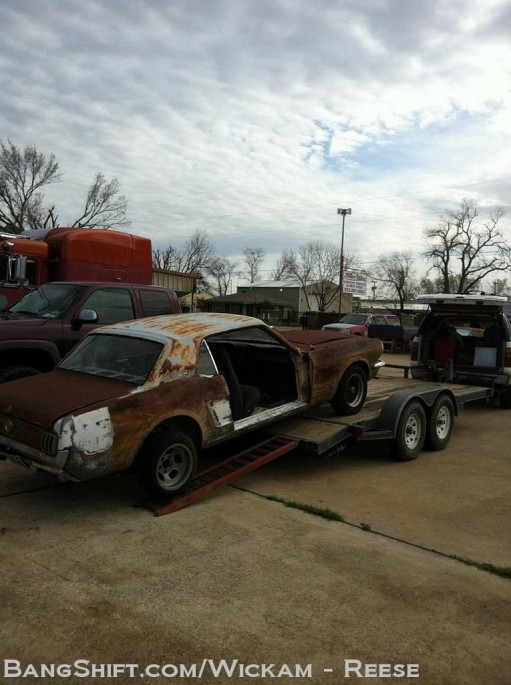 We’re reasonable sure that David started with the gnarliest Mustang in the state of Texas when starting this project in February of 2012. The car was a 289 powered, C4 transmission, 8″ rear-ended, rusty hulk. 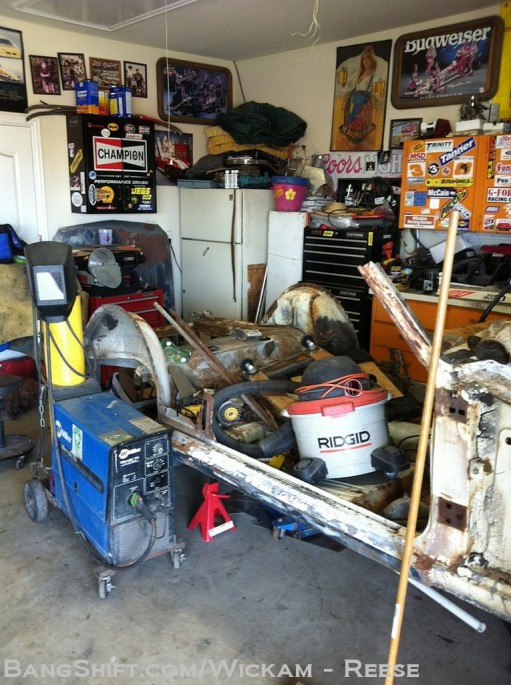 This is the part where most guys cut the rusty car up, stack boxes on it, and figure that they’ll finish it “someday”. Yeah, not David Reese! He installed all the fastback sheet metal starting from virtual scratch! 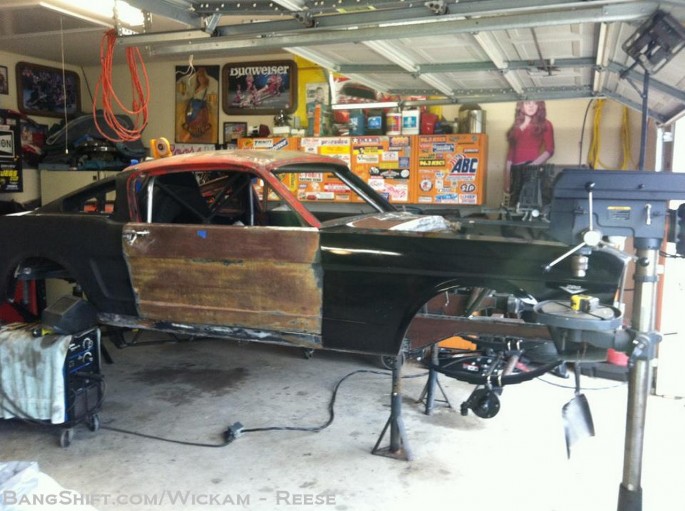 While the car was blown apart, David went to town. Adding the sheetmetal, then the 12 point cage, he tied sub frames, installed the home tooled 9″ housing with fabbed ladder bars, trimmed the front inner fender wells to front frame rails, added 1/8″ plating to rails side, and installed the front straight axle with 4 wheel disc brakes. He ate a sandwich and then fitted the 1970 351C with Lakewood bell housing, Hooker Headers, 4 speed in between rails all in his little garage! 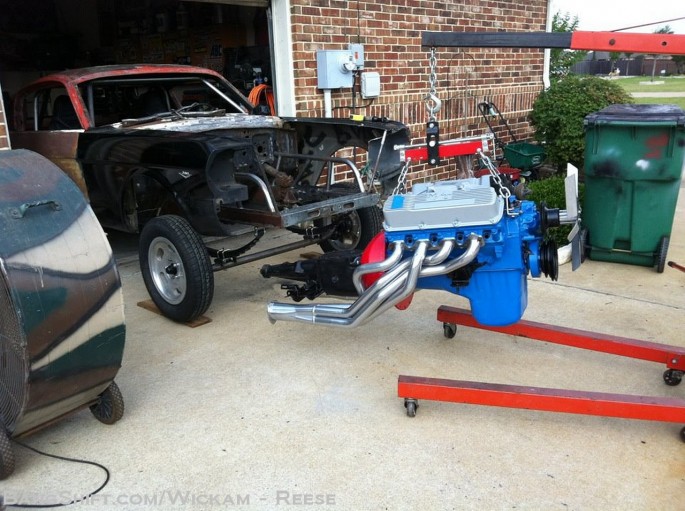 Not only is it cool that the car is powered by a 351 Cleveland engine, but the fact that he hooked that mother to a Toploader makes it even better. 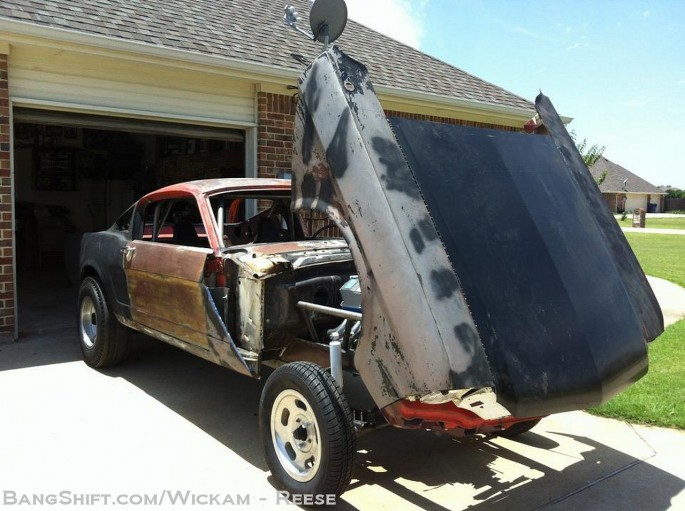 To make the tilt nose, Reese tack welded the front fenders / hood and valance together and added internal supports for strength. He then installed the radiator, fuel cell, fuel lines, and cut the floor for the Hurst shifter. For exhaust he used 3″ SS Thrush mufflers with turn downs. 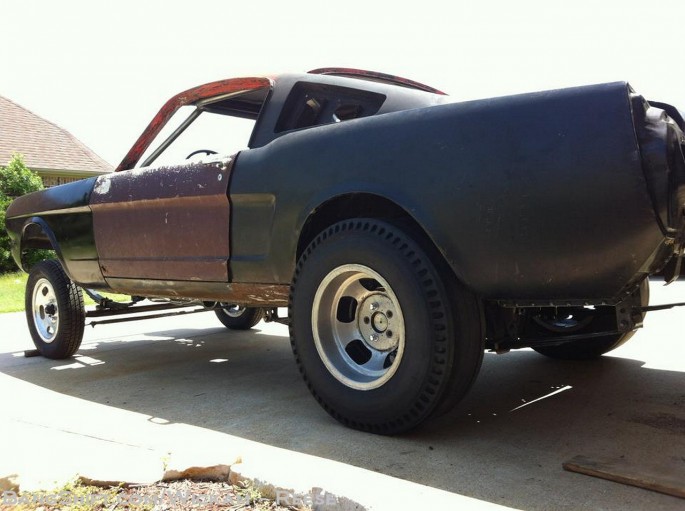 Here is the car before it went off to Joelopy’s Garage / Gene Reese for body work, then next door to Ram Rods for custom paint by Cory Sanders, both located in Terrell, Texas. Gene is David’s big brother! After paint, the car was then wet sanded and buffed to brilliant shine in David’s garage by his close friend Tim Vastine. Then to Daniel Pinstriper for custom gold leaf lettering. 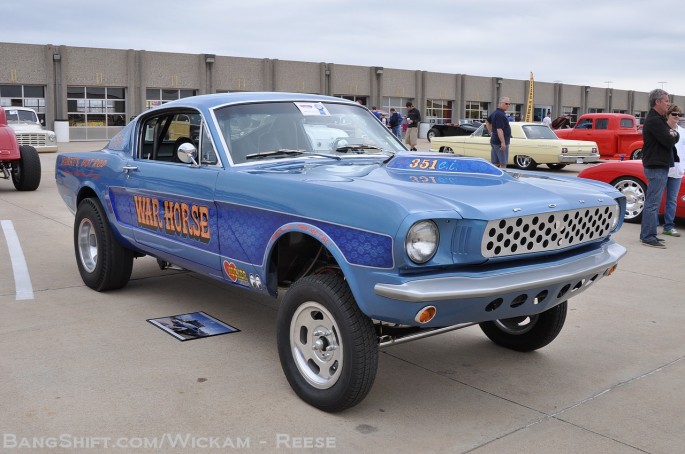 The finished product! This car is freaking awesome and even better than it gets used and driven HARD on the strip and streets. We love the fact that it is going to be driven to Kentucky for the Holley NHRA National Hot Rod Reunion. People are going to go ape over the thing at that show. The car is unique and cool and certainly stands out in a crowd. It has been winning awards everywhere. Here’s what David had to say about that, “Since finished, the War Horse has won best in class at the 2013 Dallas Autorama. Then hit the North Star Drag Strip Denton TX. Where it ran the 8th mile at the nostalgia drags for fun and grudge match while bringing home one of the treasured Torque’s 1st place in the car show. Latest stop was here at TMS for the Good Guys Lone Star Car Show, selected for Sundays winner circle and taking home the treasured “Dare To Be Different” trophy.” 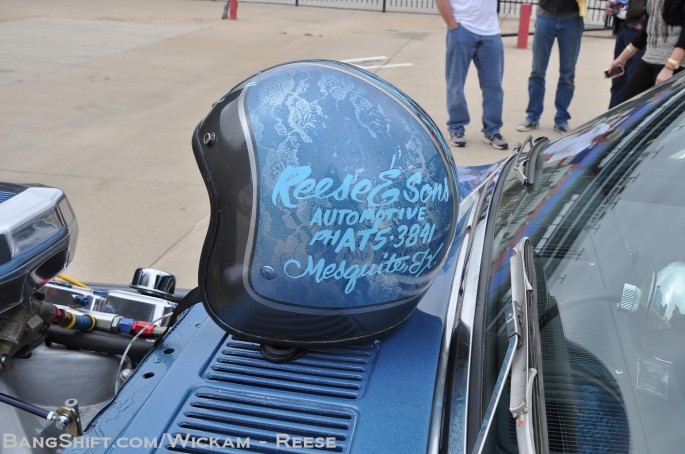 Charles shot a full gallery of photos featuring the War Horse! Hit the link below to see them all…especially the 351 Cleveland engine goodness!

4 thoughts on “The War Horse: A 1966 Straight Axle Mustang Fast Back That Punches All The Right BangShift Buttons!”