This Is What A Top End Interview Should Look Like – John Force Raw, Intense, Semi-Threatening, And On The Chip 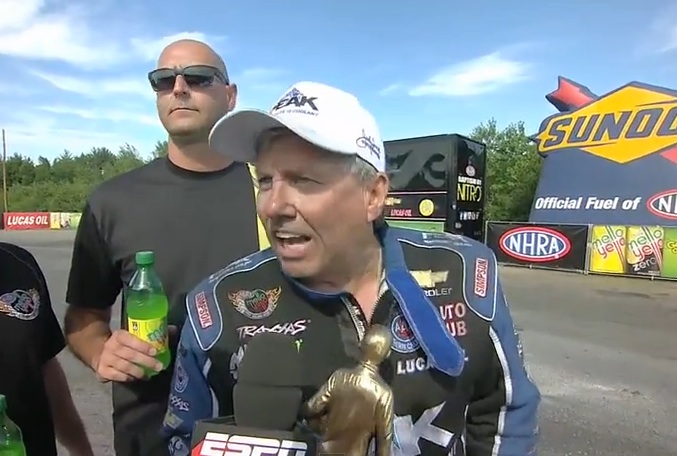 This isn’t goofy, this isn’t corny, this isn’t scripted. This is what top end interviews in drag racing should look like. Lots of you may not agree with me here because of some choice language and I am certainly not advocating anyone take it all the way into the gutter, but I’ll take a couple of naughty words and whole lot of personal fire over the more pedestrian stuff that we normally see. John Force won the NHRA New England Nationals yesterday and he did so with some serious pent up energy and we don’t mean the trumped up energy that people pull from themselves when they want to look good in front of the camera, we mean the kind of bottled up fury that this guy had been missing for a long while.

John Force’s 143rd career victory came over Tommy Johnson Jr. and it also came after John was told (according to him) by Don Schumacher directly that TJ was going to “rip his throat out” in the final. Force came to Epping motivated because it was the only place on the NHRA schedule that he had never won and in his words during the post race press conference, if he got in a nasty wreck tomorrow and could never race again, not having a win at every event would haunt him. He also came into the race as a different person than we had seen in a couple of seasons. Gone was the guy saying the right things and tap dancing about cars, sponsors, and questions about being in the twilight of his career. Present was the guy who had some swagger, had an aluminum hemi block on his shoulder begging for someone to come knock it off, and had a completely different physical speaking tone and message. Song and dance sponsor chasing John Force was gone and ass kicking driven John Force had replaced him.

There are people who despise John Force, his team, his family, and his career. Everyone is entitled to their opinion and we’re not trying to sell you on him or any of the elements of his operation. Instead we’re here to illustrate the type of driver interview that would get someone to stop what they were doing and watch the race. This was not about talking over how tough and good the other team was or talking about how lucky he was.

This was about delivering a message and a heartfelt one at that.

When the win light came on in his lane, the packed house at New England Dragway went bat crap and equally so for the crew guys who made that car run. You will see the crew car pull up at the end of the video and the guys are all slapping John on the back and celebrating wildly at the top end turnout. The best we can hope for is return fire next weekend in Bristol.

WARNING: THERE IS PROFANITY IN THIS VIDEO THAT MAY OFFEND YOU OR PEOPLE YOU WORK WITH. YOU HAVE BEEN WARNED.

Best Of 2015: Woman Claims This Tennessee Bus's Taillight Is A Pentagram Best Of 2015: That's Not A Tool, That's A Brick: The Best Video Of Karma Paying Back A Car Prowler You'll Ever See

8 thoughts on “This Is What A Top End Interview Should Look Like – John Force Raw, Intense, Semi-Threatening, And On The Chip”