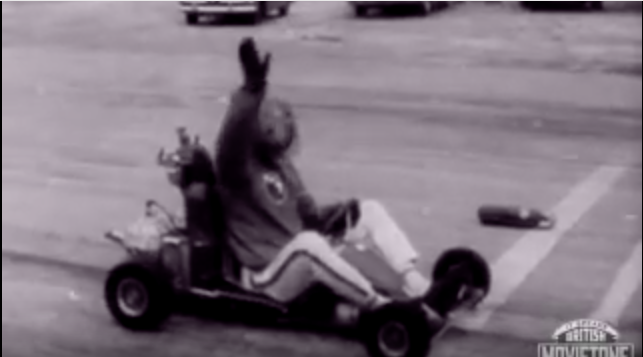 We have talked a lot about Captain Jack McClure here on BangShift over the years and that’s because the guy deserves it. He is nearly 90 years old and has the attitude of a 25 year old and the energy of a 35 year old. Just an amazing guy. We have documented his career in this super long form piece that covers every inch of his salad days at the wheel of a hydrogen peroxide rocket cart that made him famous the world over. In that piece we talked about and Jack talked about his time running a Turbonique rocket propelled go kart. This came about after McClure established himself as a talented (on a national level) go kart racer and developed a relationship with the famed Mickey Rupp of Rupp karts. Rupee had a kart built to accept a Turbonique rocket engine and McClure signed on to drive it. How did it go? Here’s what Jack told us in his own words:

“It was pretty disappointing really,” he said. “It made a big noise, and I heard later on that most of the people at the food stand dropped whatever was in their hands, but it was barely faster than my four engine kart. I only made the one pass and decided to ship it back down to Turbonique to have the second rocket engine added. The second engine made the kart into a 150 mph runner. That was pretty good for that time period and I was able to tour around and run at a lot of drag strips with it.”

This video was taken during that period where the kart had a pair of small rocket engines and Jack was definitely “on tour” because you will see the nice looking and hand lettered little VW bus that served as his traveling base of operations during those days. Perhaps the most famous image of the Turbonique rocket cart came at the very drag strip that this video was taken at, Tampa Dragway. We’re not sure if this is from the same event where McClure was slated to run Tommy Ivo but a broken kart meant that the match race idea was dead but a famous publicity photo came from it. 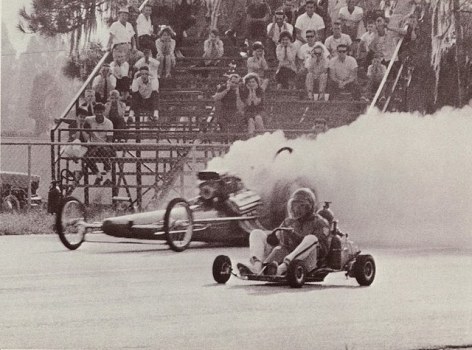 With his broken kart positioned down track and Ivo’s car blazing the hides, it looks like McClure is walking the fueler! Reportedly, Ivo is still a little annoyed with this photo even after the accumulated decades since it was first snapped. This video is truly amazing stuff because so little footage exists of Turbonique cars, karts, anything actually moving under their own power. It is really fun to watch McClure absolutely mangle a Z-11 Chevy in the video below.

This whole thing is spectacular.