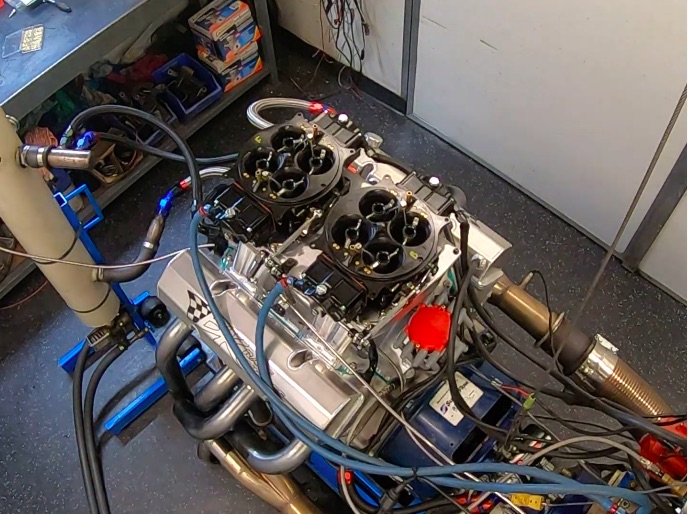 We love the fact that the small block Chevy and engine builders keep reminding us that there’s still decades of fight left in the little engine that was displaced from its lofty perch by the sexy new version of itself that debuted in the late 1990s. While the LS engine is obviously incredible and dominating the headlines and marketplace these days, the tried and true small block with all of that developmental head start and industry behind it can still get down and slug with the best of them.

We have no specs on the engine below and the horsepower is a claim made in the title of the video. We don’t see the number. What we do see though are a pair of monster carbs on top of a sheet metal intake, some healthy primary tubes on the headers, and some really singing RPM for this particular dyno pull.

This has got to be a drag race engine, right? Maybe a pulling engine? No one on the street or on the road course/autocross would be looking to this type of high RPM brutality. Also, running this engine on the street with that induction setup would have you basically hydro-locking the thing on fuel while sitting in traffic!

This is what a max effort engine sounds and looks like. It’s truly happy in one place. High on the RPM scale and wide open throttle. The small block knows the LS engine has everyone’s attention but engines like this remind us that when the effort and time are properly applied, you can’t keep a good mouse down.

Press play below to see this 441ci small block make more than 970hp!

Restoring Your 1970s Cadillac Is Easier Because Of OPGI: Check Out These Tail Light Reflectors Thunderbolt: The Story Of George Eyston And The Twin-Engined LSR Beast