Guest Editorial: There Are Two Guaranteed Million Dollar Bracket Races In 2020 – Time To Be Concerned? 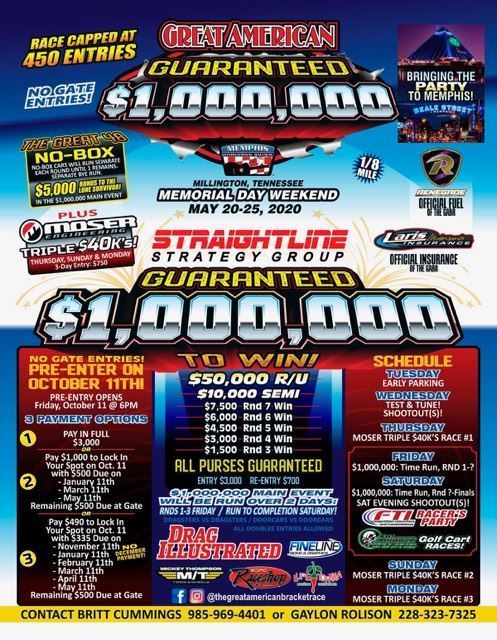 (Words by The Unknown Bracket Racer) — EDITOR’S NOTE: We’ve got lots of smart friends in the drag racing industry with interesting and thought provoking opinions to share. Sometimes they can’t share them with their actual name attached, hence the author’s name here. This is an awesome and insightful look into what will be the richest year in the history of bracket racing come 2020. Two races and potentially more coming with purses that guarantee $1,000,000 to the winner. Is there a downside to this? Read and find out.

This is a good time to be a drag racer, and if you happen to be one of the fortunate ones who has mastered the fine art of E.T. bracket racing, you were born at the right time. A little more than a week ago, Gage Burch, a 19-year old wunderkind from Florida scored what is believed to be the largest single event payday in the history of E.T. racing when he won the SFG 525 race at U.S. 131 Dragway in Martin, Mich. According to published reports, Burch received $160,000 for winning while runner-up Johnny Ezell, a good ole’ Louisiana boy better known as “Johnny Bracket Racer” walked away with $140,000. It’s hard to imagine he fretted that loss for long. They weren’t the only two winners. The final 15 competitors reportedly chopped up a treasure trove of nearly $600,000 in cold hard cash, a frequent occurrence at big money races.

By all accounts, the SFG 525 was a ground-breaking event. More than 700 entries were processed for the two $50,000 to-win companion events, and the main event, with its $525,000 top prize GUARANTEED by promoters Kyle Riley and A.J. Ashe, attracted a monster field of 624. The entry fee was roughly $1,500, and there was a $500 buy-back available to anyone who lost in the first round. Simple arithmetic shows the SFG folks took in well over $1 million in entry fees for the main event alone. So yeah, Gage Burch wasn’t necessarily the biggest winner.

Before we get into the meat and potatoes of the SFG 525, and the current landscape of E.T. racing, let’s take a quick look at how we got here.

Big money bracket races certainly aren’t new. In the 1970s, a few forward-thinking promoters, most notably Byron Dragway’s Ron Leek, began posting then-unheard of $5,000 and $10,000 top prizes, big money for the days when a gallon of gas was 50-cents or less and minimum wage was about $3. When late, great aftermarket parts icon Dick Moroso purchased Palm Beach Dragway in the early 1980s, he immediately upped the ante with the famed Moroso 5-Day E.T. Championships, which combined the elements of a frat house kegger and wild-west saloon with a week’s worth of high-stakes E.T. racing action. Win the Moroso 5-Day and your place in drag racing history is secured forever.

Visionaries like Jim Ledford and George Howard also carved out their spot on the Mount Rushmore of big money promoters. Ledford introduced the sport’s first $50,000 bracket race in the early 1980s at the Mid-Michigan Motorplex, and Howard later changed the game forever when the Million Dollar Drag Race was born in 1997. Howard had long dreamed of an event that actually paid $1,000,000 to the champion but sadly, he never lived to see that become a reality. Still, Howard’s original Million, now successfully run by E.T. racing veteran Randy Folk and his daughter, Jenny, remains the gold standard for big money races. Even more recently Peter Biondo and Kyle Seipel, two more highly respected sportsman racers, launched their successful series of Spring Fling and Fall Fling events. There are currently a host of other big races across the country, including several under the SFG banner.

So that brings us to where we are now. The SFG 525 is only the beginning. SFG previously announced plans for an honest-to-goodness GUARANTEED MILLION DOLLAR payout next July 4 and before Burch even had a chance to cash his winner’s check, another group, led by Britt Cummings and Gaylon Rolison, made waves by posting a flyer their own guaranteed Million Dollar race, to be held Memorial Day weekend 2020 in Memphis.

We’re barely halfway through 2019 and next year’s calendar already includes two events with million dollar guarantees, two events with $500,000 guarantees, plus Folk’s original Mickey Thompson Million Dollar Race in Montgomery and the Biondo/Seipel K&N Million in Las Vegas. Those two events feature a large guarantee, with an escalating payout based on car counts. If you’re keeping score, that’s six events with a combined winner’s share of more than $4,000,000!! We’re not even tracking the growing number of $100,000, $50,000, $25,000 to win events that are far too numerous to mention. Seemingly every couple of weeks, there is the opportunity for a life-changing payday.

It’s a fantastic time to be a high stakes bracket racer, or so it seems. However, it would be unwise to ignore the storm clouds potentially gathering on the horizon. First, let’s get to the obvious elephant in the room; Where are all the cars going to come from to fill these dates?

By a conservative estimate, it takes $4,000-$6000 to attend one of the mega events, and you can double that number should you bring two cars or double-enter (where permitted). Diesel fuel, entry fees, buy-backs, race gas, food and beverages, routine maintenance. The cost adds up quickly. Even the smaller ($10,000-$25,000) multi-day races will eat a couple grand from the racing budget.

If your talent and luck allow you to consistently make it to the late rounds, there are ample opportunities to make good money, and for a proven winner, or someone with the ability to generate sponsorship dollars, making a career out of big money race is not out of the question. After all, bracket racers are nothing if not optimistic. Who doesn’t think they can win enough rounds to split a six-figure payout? But what happens when your car lets you down? When your concentration is off just a tick, or the thousandths just don’t fall your way? Huge entry fees and long winless droughts don’t mix well. Credit cards get maxed. Home life suffers. Not to suggest that’s a frequent occurrence. In fact, racers tend to be very a resourceful group, and many of them operate successful businesses or at least have high-paying jobs. Still, the possibility exists for someone to get in over their head, and to do it quickly.

In the second-half of 2019, there are 39 major E.T. events listed in the big money bracket section of www.dragraceresults.com. The payouts, dates, and locations vary greatly, but one would be foolish to think all of them will have the same success as the SFG 525. No matter how robust the economy may be, it’s not financially sustainable. You don’t need a degree in economics to understand how each event takes dollars out of the system. The promoters get their cut. The racers who win get their cut. Even Uncle Sam gets his cut on Tax Day. The race winners tend to reinvest their profits back into the sport by supporting future events, but that’s not always the case. Pay off your mortgage, but that new Toter Home, or simply take the Taking the wife to Cancun for the week and that’s more dollars that don’t get recycled into the bracket racing ecosystem. Think of a casino with the doors locked. No one leaves and no one new comes in. Eventually, the house will have ALL the chips. To that end, big money bracket racing must continue to attract new blood, an increasingly difficult proposition since it’s so darned hard to win races these days.

Here’s another interesting scenario. It hasn’t happened yet, but it could. What if a racer simply decided not to split to pot and walked away with the entire $500,000 or even a $1,000,000. That would be great publicity for the sport and that individual, but it could be a disaster for any racer who made the late rounds and didn’t make enough to cover his or her expenses. Again, this is not a likely scenario, but one that remains a possibility.

Will a promoter suddenly get left without a chair when the music stops?

Many events have gone to a pre-entry format, so promoters collect entry fees in advance. In fact, the K&N Fall Fling event later this year sold out (all 385 spots) quicker than a Led Zeppelin reunion. Pre-entries give promoters the peace of mind needed to guarantee a large payout, but what about the events that have no pre-entry? What about an event hampered by a bad weather forecast? What if the robust economy suddenly hits a speed bump? The results could be catastrophic. Imagine a promoter taking a six-figure loss. Worse yet, imagine one that can’t. Imagine checks bouncing. Bills left unpaid. Better yet, let’s not go there. On the surface, those currently in the game appear to operate with integrity and one hopes they have a plan to deal with adversity. As much as we like the idea of competition and new investments in the sport, I’d be cautious of any new promoter who is not well known throughout the industry.

One other concern is time management. Those who attended the SFG 525 compared it to Woodstock, with four days of nearly round-the-clock action. With 600 and 700 car fields, and a re-entry format, it’s nearly impossible to complete a race in one day. It takes anywhere from five to seven hours to complete one round, and that might be optimistic. That doesn’t’ even account for track prep, an oil-down, crash or a rain shower. The schedule flaws in the SFG 525 were exposed early. The first $50,000 race was completed in the middle of the night. Eventually, Sunday’s $20,000 race was scuttled altogether to allow enough time for the 525 main event and the second $50,000 race to be completed. Even then, it was almost 4 a.m. when Burch and Ezell staged for the final. At what point does driver fatigue become an issue?

We’re going to make one more important albeit unpopular point. How can we be 100-percent certain that each competitor is on the level? To their credit, nearly all of the big money race promoters have employed experienced tech officials with advanced knowledge of electronics and the racers who make the money are often subject to thorough inspections. More than a decade ago, bracket racing endured its first real scandal in the Rich Matty/Dirty Dozen incident. Since then, there has been relative peace and calm even as the stakes continued to escalate. These days, it would take some very sophisticated technology to gain an edge over an opponent, and the competition is so tough right now that most drivers don’t need any help to produce a nearly perfect package. Still, money is often called the root of all evil, and with $1,000,000 at stake, that’s a discussion worth having.

The bottom line; who knows where this is headed? Perhaps someday we’ll be bracket racing for $5,000,000 or $10,000,000? Perhaps bracket racing will be featured alongside high stakes poker on late night sports television? Maybe Johnny Bracket Racer will appear on a Wheaties Box? The sky is the limit but let’s just be careful what path we choose.

2019 Capital City 300 Pull Photo Coverage: Killer Photos Of Trucks and Tractors Getting Down With The Sled! Weird Car, Cool Story: This Guy's Passion For His 1969 Reliant Scimitar Is Cool - Ever Seen One?!

2 thoughts on “Guest Editorial: There Are Two Guaranteed Million Dollar Bracket Races In 2020 – Time To Be Concerned?”